£1bn centre for cleaner, greener engines to be opened

Dr Cable will make the announcement during a visit to officially open the Advanced Propulsion Centre (APC) headquarters at the University of Warwick.

The two new projects are led by Jaguar Land Rover. They will be part of the projects announced this year that will safeguard 2,500 jobs, in the £1bn industry and government commitment to turn low carbon propulsion technology into products developed in the UK.

The APC projects committed so far aim to reduce CO2 emissions equivalent to the output of 250,000 cars per year over the next decade.

The Business Secretary will also announce today that a further £100 million funding round has opened for businesses as well as a new programme to support small businesses.

Dr Cable said: “Green technology will drive the cars of the future and UK designers and manufacturers must continue to be leading innovators in this field.  That’s why we’ve collaborated with industry to provide £1billion joint investment in the Advanced Propulsion Centre – one of the driving forces behind our automotive industrial strategy.

“The APC will be the hub for projects as diverse as using motorsport braking systems in buses, and streamlining the production of electric motors. It’s these kind of initiatives that will enable our automotive sector to raise the bar in innovation, give businesses the confidence to invest and create high skilled jobs.” 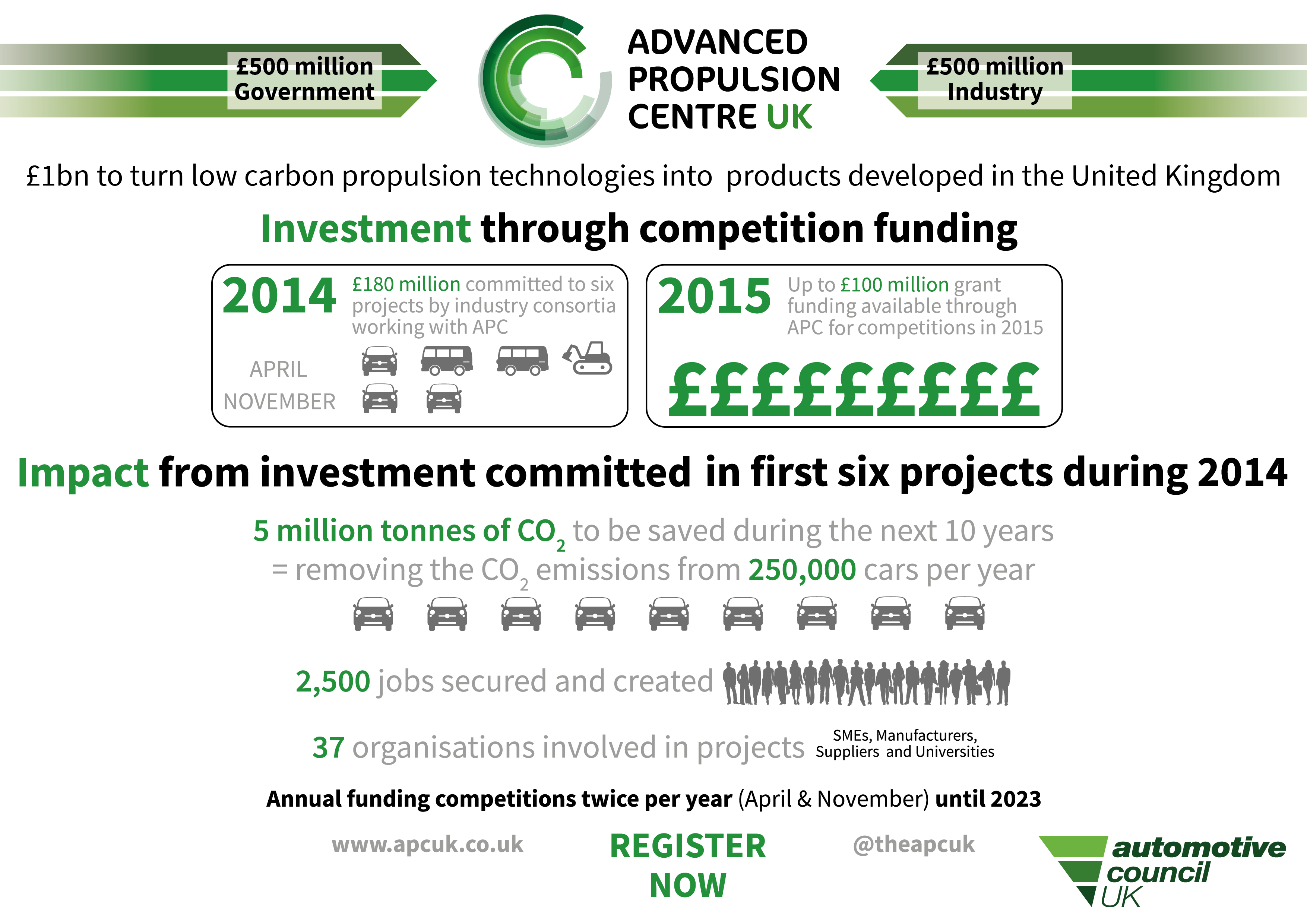 Speaking at the opening of the APC Hub at the University of Warwick, chief executive Tony Pixton said: “The Advanced Propulsion Centre is now active as an enabler for low carbon propulsion development and production in the UK. Today’s news confirms we are on track to support and create more than 30,000 UK jobs over the next decade, cutting CO2 emissions and driving exports.

“The APC is leading the development of the UK as a propulsion nation as we expand from the Hub with the announcement of the new London Spoke, in conjunction with Loughborough University and adjacent to the proposed Centre of Excellence for Digital Engineering and Test.’

The APC helps forge partnerships between those who have good ideas and those who can bring them to market. The services provided by the APC enable projects which provide profitable growth and sustainable opportunities for the partners involved and contribute to the UK’s economic prosperity.

Loughborough University in London welcomed the news that the first APC Spoke will be located at its premises on the Queen Elizabeth Olympic Park campus.

“Loughborough University has been training automotive engineers since 1919 and our research in powertrain engineering, propulsion and manufacture is recognised as world-class. Powertrain and propulsion development is a key strategic area for Loughborough: indeed earlier this year we announced a five-year investment of £1.5 million in research appointments, which will help us to develop the new advanced propulsion technologies required for the move to zero emission vehicles. We are therefore exceptionally well-placed to support this very important and hugely exciting development.

“The Spoke’s location in the Here East development of one of the most dynamic and fast developing regions of the London will also ensure the APC has the visibility and connectivity it requires to achieve its ambitions.”

Gordon Macrae explains why HR is banned at Gripple