The occasion marks another significant milestone in Jaguar Land Rover’s product offensive which will see the company deliver 50 significant product actions over the next five years.

The latest model in the Land Rover line-up, which will go on sale in 170 markets in early 2015, has created 250 new manufacturing jobs following a £200m investment in the Halewood plant.  The impact of Discovery Sport has also been positively felt within the UK supply chain where £3.5bn in contracts have been awarded to 55 suppliers.

Many of the companies supplying components to Jaguar Land Rover have made long-term investments in their production facilities, safeguarding and creating over 1,000 jobs in the UK supply chain.

Ian Harnett, Jaguar Land Rover’s purchasing director said:  “A strong, competitive supply chain, meeting our rigorous cost and delivery metrics, is fundamental to the sustainable growth of our business.  With many more new products in the pipeline, gearing up to supply Jaguar Land Rover is a solid business proposition.”

The Halewood plant, which is already home to the company’s fastest selling model – the Range Rover Evoque – has seen investment in the site more than double and workforce treble over the past four years with 4,750 people now employed at the site.

Many of those employees joined local dignitaries to witness the first car to roll off the production line. The Kaikoura Stone HSE Luxury spec vehicle was officially handed over to Stephen Attenborough, commercial director, Virgin Galactic, to support Land Rover’s long-term global partnership with Richard Branson’s pioneering commercial spaceline.  Demonstrating a shared vision of pioneering spirit, technological innovation and sense of adventure, the partnership will see this vehicle become part of daily life for the Virgin Galactic team at its operations base.

Richard Else, Jaguar Land Rover Halewood operations director said: “Today marks another incredibly proud moment for the Halewood plant, its workforce and the region as a whole.

“Investment in the plant since 2011 now stands at £500mn and has most recently been demonstrated with the installation of a £45mn state-of-the-art Aida servo press line which provided the backdrop to today’s event.” 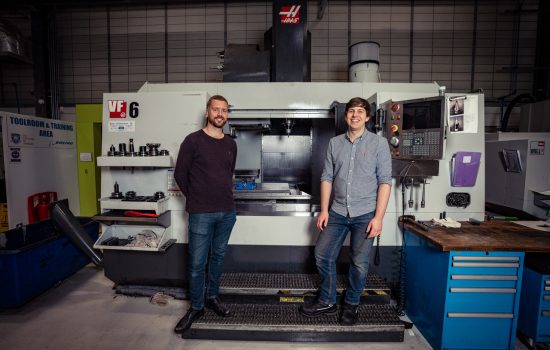