A powerful voice for energy

What role can an energy supplier play in voicing the concerns of industry towards Government energy regulation?

About two years ago, energy company E.ON embarked on a programme to get closer to customers across its business.

According to E.ON’s Director of Corporates, David Topping, the company revised its vision to increase its customer focus and examine exactly what each of its customer segments wanted from their supplier.

Topping said when they started to look in depth at their larger, more energy intensive customers, it became apparent that one key requirement was to have enough knowledge to navigate the energy world and its many legislative requirements.

“We recognised that certainly with our larger customers we needed to get closer to them and we needed to know more about what they wanted from their energy supplier,” Topping says.

“We set about a series of large customer forums, bringing a group of customers together on a regular basis to give them information and updates to help them navigate the increasingly complex energy world – be that new technologies, regulatory changes or movements in the wholesale markets.”

These meetings gave E.ON the chance to update its customers on regulatory changes such as Electricity Market Reform (EMR) and the Energy Savings Opportunities Scheme (ESOS), and what to expect when these were enforced – for example, how to efficiently manage the energy costs associated with them, such as avoiding peak cost periods.

You can download the E.ON Energy Report 2015, in association with The Manufacturer here.

They also gave their customers updates on factors influencing the energy commodity market. “On the back of that we ended up talking in detail about regulation and its potential impact,” Topping says.

“A discussion started about how large organisations could input in to the thinking of the regulator at an early stage. What was interesting was that these large nationwide players had strong links into Government and their relevant business departments but they felt they needed help in communicating with parts of Whitehall outside their remit, such as the Department of Energy and Climate Change (DECC) or the energy regulator, Ofgem.”

Topping said it became apparent that E.ON’s relationship with bodies such as Ofgem and DECC gave them a significant opportunity, to help these large organisations – both manufacturers and non-manufacturers – to be heard.

They engaged with Ofgem and both agreed that it would be a very worthwhile exercise. “A lot of energy regulation impacts not only us as a supplier, but also has a significant impact on our customers and their operations– production schedules and peak charging, wholesale market restrictions and mandatory energy efficiency improvements to name but a few.

“We felt that we could help our customers’ voices be heard and therefore asked if they would like to join us in a meeting with Ofgem. One of the customers they asked was Andrew Scrivener, Procurement Manager at Ardagh Group UK.”

Ardagh is one of the UK’s, and world’s, largest glass and metal packaging producers, and at a global level the company produces more than 35 billion food and drink containers a year.

The company is a major user of energy alongside other companies in the glass industry and companies in industries such as steel, cement and paper.

So when E.ON invited Ardagh Group to attend an open discussion with Ofgem, Scrivener welcomed the opportunity.

“The meeting was mainly focused around another phase of the EU Regulation on wholesale Energy Market Integrity & Transparency (REMIT) and the uncertainty about the legislation surrounding it,” Scrivener says.

“It was extremely beneficial to have the opportunity to meet with Ofgem and let ourselves be heard.” He adds “It’s important to get our position across and start a dialogue with the key decision makers.

“Unless you represent a trade body it can be difficult to be heard but as a collective group of ten or fifteen companies, supported by E.ON as a provider with a major customer base, then I think that starts a really interesting discussion. We need to speak as an industry, and I feel as though we made a great start with this approach for a meeting.” 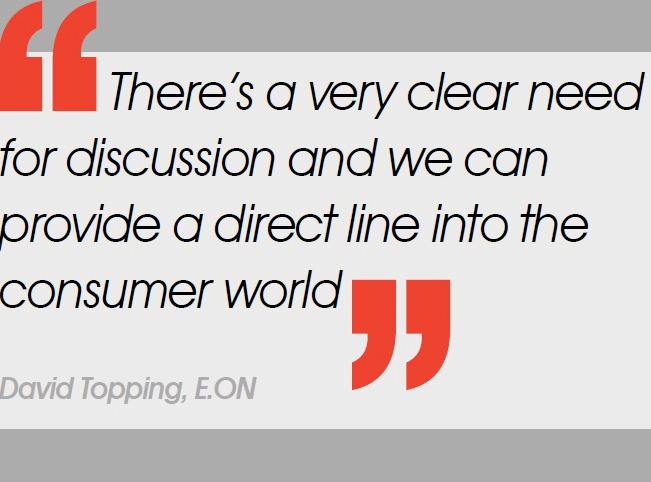 Topping agreed, saying he felt positive that the meeting was warmly received by all parties.

Bringing customers in to these forums can help the regulator understand first-hand the challenges large policy decisions pose for customers, and can help them shape and introduce regulation as effectively as possible – creating a win for the regulator, for the customer and for the supplier.

“I believe Ofgem found it really beneficial to talk directly to some of the larger companies that their actions and thinking would be impacting,” he says. “I certainly felt they viewed this as a favourable step.

“I think when there’s a very clear need for discussion and we can provide a direct line into the consumer world, that’s a really good position to be in.”

What did some of the UK’s more energy-intensive manufacturers have to say when they sat down with and E.ON?

The pending General Election is beginning to weigh heavily on the minds of the country’s manufacturers. While many are calling for the next elected government – regardless of the colour of its ties – to maintain the momentum and focus towards manufacturing seen in recent years, others are anxiously waiting for some more pertinent, solid, industry-focused policy.

These concerns and challenges were laid out in detail recently when energy supplier E.ON teamed up with TM to host an exclusive round table event with some of the country’s most renowned, energy-intensive manufacturers.

Besides the key topic of engaging with Government departments such as Ofgem (see main article), other talking points from the evening included:

Allan Harley, Health, Safety and Environment Manager at heating and ventilation manufacturer Vaillant Industries, was quick to voice his concern surrounding the effect UK energy taxes had on the overall competiveness of UK manufacturing.

“This country, in terms of workforce and management, is as competitive as any,” he said. “But if you’re actually under artificial penalties, which we are, then we suffer because this country obeys the rules.

“The energy you use is taxed further than just VAT. This means the more you make the more successful you are, but also the more additional tax burden you’ve got. That is then passed on to the bottom line and to the prices the customer pays. It makes you less competitive with other European countries that do not have these penalties.

“That’s unfair and it’s not a level playing field. Either have a standard EU charge – if you want to work on a 20-20 vision to reduce the energy you use, then fine – but make it level.”

This notion of being penalised carried the conversation towards the ominous topic of Triad periods.

While some companies present were more complacent than others surrounding the difficult-to-predict peak charge periods, others expressed their concern surrounding the massive cost implications which could occur if one of these periods was not managed properly.

John Wood, Director of Group Corporate Services at Caparo said while it was possible to see the logic of Triads in attempting to “smooth out usage”, it was not proactive in assisting the productivity of UK manufacturing.

“Switching stuff off in-house, guessing when it might be a Triad – you would never come up with a scheme like that if you wanted to make UK manufacturing as productive as possible, would you?” Wood emphasised.

“It’s an uncertain scheme. What should be happening if they’re trying to help manufacturing is making sure that we’ve got enough capacity in the system to be able to cope with domestic demand. Most of this happens when you get a surge in domestic demand, and it’s another penalty on manufacturing.”

E.ON’s Director of Corporates, David Topping reassured attendees that the right supplier could, in fact, be a major advantage in forecasting when these Triad periods could occur, potentially saving UK businesses hundreds of thousands of pounds a year.

But he also emphasised that Triad alerts could never be guaranteed to be 100% accurate (bit.ly/PeakPeriods).

“Forecasting the Triads is not easy,” he said. “They’re confirmed retrospectively and regulatory rules mean there must be 10 days separating each Triad.

“In the medium term there are opportunities for businesses to focus on more sustainable opportunities to shift load away from more expensive peak times into cheaper off-peak periods.”

By night’s end it was apparent that not all energy issues could be resolved with one brush stroke.

Energy demands differ from business to business and with energy prices for UK manufacturers not showing any sign of dipping anytime soon (not in the least, towards a more equal European benchmark), it will fall on manufacturing businesses to take more proactive steps to make sure the energy they are purchasing is working for them in the most efficient, cost effective way possible.