A precision philosophy towards manufacturing services

Luke Benton, managing director of MNB Precision, spoke to Jonny Williamson about the benefits of embracing a manufacturing services-based philosophy.

Having slashed lead times by an impressive 78%, alongside passing cost savings of up to 10% to all of its customers, family-run engineering firm, MNB Precision has rapidly made a name for itself as a servitization success story.

The more common approach to servitization sees ancillary services offered towards the back-end of production and distribution, such as those around maintenance, repair and overhaul (MRO).

Less frequently encountered is MNB’s focus on the front-end via the design and product-realisation stages; as the firm’s managing director, Luke Benton explained to me, “We talk to the draftsman, the people creating concepts, and help them to formulate their ideas in an improved, more cost-effective manner, rather than servicing the product once it’s out in the field.”

The approach corresponds with the business’ current expertise, however Benton is the first to admit that moving into servicing widgets in-situ represents a potential growth opportunity in the future.

The chance arrival of an email from the Aston Centre of Servitization Research and Practice set the managing director and MNB on the road to transitioning from a make it–sell it business towards a service-based mentality.

“It was perfect for us, because Aston wasn’t teaching straight out of a textbook. Rather, they helped us to identify what we could do better and then proposed the structure to make those changes happen,” Benton noted.

The approach correlated with where Benton wanted to take MNB, to create a business that went beyond the accepted expectations and delivered a timely, accurate service, project advice, and a professional attitude.

“We instantly saw the longer term benefits that servitization could offer us. While the oil and gas market has always been, and will continue to be, one of our primary targets, it was important that we looked at evolving our business to remain competitive and ahead of the times, not just keeping up with them,” he continued.

As such, the specialist in CNC machining and turning, jig boring, spark and wire erosion, grinding and shot peening has branched out into power generation; aerospace; rail; nuclear, and defence.

With servitization representing a fundamental shift to how the business operated, Benton is absolutely steadfast in his belief that acquiring staff buy-in helped to make the transition a success.

“Giving staff the opportunity to understand what we were trying to achieve, not just with servitization, but our future goals and developments, was – and is – crucial. We effectively servitized our workers, giving them a part of the journey to make their own, especially our discipline engineers,” the MD noted.

The aim was to create multi-discipline workers in a multi-process company, according to Benton, eliminating any potential bottlenecks around having only one person or machine capable of performing a particular task.

Staff development also played – and plays – a leading role in the company’s success, particularly in regards to upskilling.

“When considering bringing processes in-house, we always look to upskill rather than hire new skills. That’s not because we don’t want to create jobs, but because our team deserves the opportunity first as they’ve put in the hard work and effort to make MNB what it is,” he said.

Having already delivered dramatically reduced lead times, improved project services at a lower overall cost, a greater amount of in-house processes and a more diverse client base, alongside exploring servicing products out in the field, I asked what could be left for this Coventry business?

Smiling, Benton acknowledged that the management team has implemented some fundamental changes to the business in a surprisingly short timeframe, but there are always new disciplines to offer – such as manganese phosphating – and opportunities to leverage.

MNB is currently a high value, high complexity, low volume machine shop, working in batch sizes of ones, fives, tens, occasionally fifties or hundreds if it can. Its typical core competency involves working on single components worth somewhere in the region of £70,000.

Yet, its clients are also contracting suppliers to provide 70,000 £1 components as well, the managing director explained, “So, we are looking into also becoming a low value, low complexity, high volume machine shop; servicing both of the category requirements our clients are seeking.”

I asked Benton to reflect on the past two years, the path the business had travelled and sum up what servitization meant to MNB. 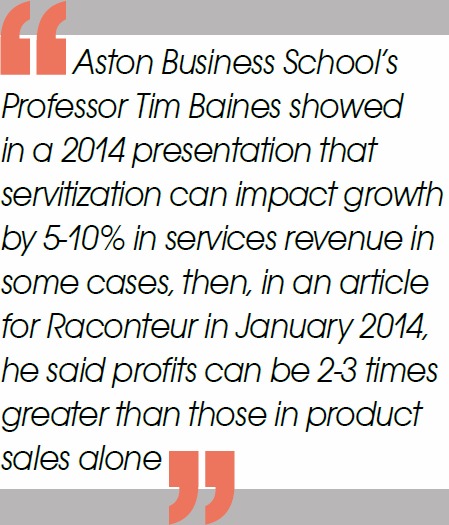 “It means how can we deliver a better part and what can we offer clients around that part, such as time, money, materials, etc.? It proves that servitization doesn’t have to be overly complicated and technology-focused, requiring sensors, big data and analytics,” he replied.

“There’s always opportunity to improve, that’s what servitization teaches; don’t stop trying to be better. It’s a process, but we’ve taken it and turned it into a working philosophy, of sorts. You can’t think about change unless you change your thinking, that’s one of the biggest cultural blocks,” he continued.

So what advice did Benton have for those thinking of embarking on a similar path towards adopting a services-based business model?

“Take a step back and question things, where do you sit in industry and the economy, what could you do, how and where could you do it, and who do you need to achieve it? That questioning shouldn’t stop.

“We are constantly reinventing ourselves and trying to make ourselves better. We may not always succeed, but it’s learning from those non-successes that helps you ask the next question.”

Want to know more about Servitization? Join the only online network dedicated to supporting businesses achieve their goals through servitization. Join MSTLN.com now.