Steve Coe, group innovation director at Element Six, talks to Marc Sobbohi about the trials of opening a global innovation centre and the hopes for the future.

Diamonds. Often seen as a girl’s best friend. However, there’s far more to them than you may think.

The kind that are mined and refined are the ones for show, but Element Six has been looking at the industrial use for diamonds since 1946.

Initially the natural kind were considered for industry, but it soon twigged that diamonds could be created and made fit for purpose. That’s a pretty revolutionary concept, even when you consider it today.

Yet behind the closed lab doors, Element Six are pushing forward with diamond application at a level most of us never even contemplate.

Now they have opened their Global Innovation Centre in Harwell, Oxfordshire, placing all their finest scientific and engineering minds from around the globe in a hotbed of advanced thinking.

Innovation director Steve Coe is the man charged with driving invention at a company based on the concept of creative application. He offers insight into the trials of creating a research centre for innovation and, more poignantly, hopes for the future as uses for synthetic diamonds move further and further forward.

“It’s really about accelerating innovation so we can improve the products in our customer’s hands. The reason we set this innovation centre up was previously we had a number of R&D sites fragmented around the world in different production sites and we wanted to bring that together in one site so it was much better co-ordinated and integrated together, we could do the whole innovation process, through from design to application testing all in one building.”

Communication is seen as a key benefit emanating from the new centre. The number of scientists holding a doctorate in one place is impressive and it creates an environment which allows innovation to grow and evolve.

Mr Coe said: “Already we’ve seen a much improved level of communication between our scientists. As they’re all in the same building we’re seeing much better communication and a better R&D process.”

Looking forward Mr Coe sees plenty of scope for growth in areas where synthetic diamonds are already being used as well as prominent use in electrochemical gas sensors.

“I think we’ll see increased growth in established market areas where we’re exploiting the hardness and the abrasiveness of the raw material. For example diamond cutting, going into drilling and precision cutting tools. I think we’ll see a lot of growth in those markets in the coming years.

“Increasingly I think a lot more strategies for diamond will open up. For example I think growth areas will be internal applications, exploiting the fact that diamond is the best spreader of heat in materials, to use as a heat spreader in electronic applications to keep devices cool.

“Optical properties, using them as a window in high powered lasers to increase the power load lasers can operate at.

“Beyond that we see them being used as an electrochemical sensor in extreme environments and also waste water treatment.” 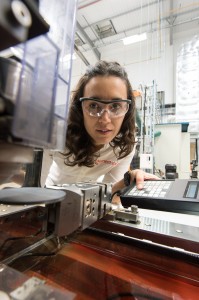 “In terms of manufacturing these products, whilst the Global Innovation Centre is the focus of all our new product development there will remain R&D teams in our main production sites which will act as the interface between the innovation centre and production.

“So, for example when we’re developing a new product we’ll have scientists make notes coming up to the innovation as part of a wider project team and they’ll actually go with the prototype product. They’ll be the last to make it into a robust manufacturing product”

Element Six is a $500m company which hires 2,500 employees worldwide. The 5,000m² Harwell centre creates a beating heart to the company’s creative process and shows great faith in Britain to facilitate global change in industry.

“The whole reason for locating the centre here in the UK was that we wanted to bring in the very best innovation talent. I think we can actually be very pleased with what we’ve achieved and we’ve been very successful.

“But it is a major challenge. It has been a lot of effort and a lot of interviewing, we’ve taken over a thousand interviews during the process.

“It’s been a lot effort and a lot work but I think we can pleased with the final result and the calibre and quality of the people we’ve been able to bring into the organisation.”

Mr Coe added his thoughts on the shortage of engineering skills in the UK:  “I’m not sure there’s been a huge change over the last ten years. I think what’s helped us a lot is obviously having a brand new innovation centre and it’s a great opportunity to start establishing facilities and really shape the way we do things.

“I think that’s helped us a lot in our recent recruitment process.”

As for attracting new business, Element Six remain focused on delivering development and maintaining quality for their existing customers but also see new customers coming from certain markets where there is room to grow.

“I certainly see continued growth with our existing customers, but I think some of the new applications, so thermal opportunities, electrochemical sensors, are certainly growth areas where we’d be looking to develop new customers in those markets.”

Innovation in Manufacturing will provide delegates with the knowledge and expertise they need to nurture innovation in the workplace and find more efficient ways of developing new, more sophisticated products.

Topics to be covered include:

For more information and to register: