Autodesk and Taxal recently conducted an in-depth research study into how the Internet of Things is set to transform manufacturing over the coming years. Jonny Williamson catches up with Taxal’s Allan Behrens to go through the findings and the wider implications.

What are some of the key takeaways this IoT survey presents?

Positively, more than half of companies polled (56%) are involved in an Internet of Things (IoT) related project that is either in-market or will be in the coming year. Over three quarters (78%) will be in the next three years; that’s much higher than expected.

The importance of IoT to a business was reinforced by the fact that half (50%) currently see IoT as ‘critical’ or ‘very important’ to their company, with more than a third (35%) believing it worthy of additional development investment beyond that of ‘normal R&D activities’.

In terms of benefits, half (50%) of the companies believe that IoT helps them to differentiate their offerings, and approaching two-thirds (58%) feel that it helps them better compete with competitors.

More than half (52%) believe that IoT will allow them to develop new services for their customers, and almost the same amount (49%) see it as a technology which helps them improve the uptime of their products.

What was the sector, size and location of the companies questioned?

280 primarily small-to-medium-sized companies were surveyed, spread across a number of key Western geographies; a large number of which were represented by senior managers or managers. A mix of sectors was included, and though there were some differences between them, it wasn’t as much as you would expect.

Tellingly, all of the positives were pretty consistent, namely that IoT is an area companies must be proactively exploring to either defend their business against rivals who are doing it, or to differentiate their products.

The majority of large multi-national businesses are already involved in IoT projects or pilots, predominantly because they have the available resources to do so. Small companies in particular don’t. That’s why this survey and resulting data is so interesting as it clearly shows many are already involved in an IoT related project.

How did you define an ‘IoT related project’?

As either developing or having already developed connected products in service. Many of the companies which have already taken IoT steps report that the move is going to give them a real competitive advantage or market differentiation. The wording around that is very specific and it was interesting how many thought it was going to be defensive (catch up with competitors) versus aggressive (competitive advantage and differentiation).

How are these competitive advantages manifesting themselves?

There are three clear areas of significant benefit: providing a better customer experience through your products or service; offering different service-based solutions rather than simply standalone products, i.e. adopting a servitization model; and adding more features and/or functions to your products through design and development.

Are these areas where the biggest gains can be achieved, or are they simply low-hanging fruit?

These areas, I think, are where companies believe they can achieve gains the most expeditiously and are of more immediate value to them as a business and to their customers. Low-hanging fruit is about time-to-value, how long it takes to realise a benefit. If you consider past manufacturing paradigm shifts, such as ERP, PLM or service lifecycle, these are technologies which haven’t had a particularly short time-to-value.

It might be a stretch to say that IoT offers instantaneous benefits, but time-to-value is very quick. A company can very easily add connectivity into its products, providing it’s an agile, responsive development organisation. A customer can also obtain almost immediate value from whatever a company does, either through predictive maintenance, adding new features, or communicating between products or between the customer and your service/development organisation.

How can someone make an effective business case for their company to be proactively developing an IoT-based initiative?

The best way to incite action is to demonstrate what competitors or others are doing, how it makes or saves a business money and helps accelerate time-to-value. It’s about showing what value can be delivered and what sort of things you can do differently with IoT connected technologies. Bringing good examples to senior decision-makers or key customers is the best way of achieving that.

You can’t discuss IoT without also mentioning cloud technologies, but there still seems to be hesitancy towards the cloud. Is that a stumbling block to greater adoption?

I definitely would have agreed with you two years ago. Today, I think there’s much more of an acceptance towards cloud-based technologies. Without question, security has been the number one concern when it comes to the cloud, but that’s changing.

It’s still a high-level apprehension, but the benefits are so overwhelming that the concern moves to a significantly lower position in terms of importance. Companies are realising that the security offered by cloud-based solutions is far greater than they could ever achieve in-house.

It also backs your data up; so the cloud is not only secure, available across multiple sites, very fast, and scalable, it’s also really reasonably priced and offers built-in redundancy. The same goes for the customers of companies implementing IoT technology. The value-return for the client is huge because in many cases it’s no longer about making one-off, very large capital expenditures, it’s about buying into a subscription-type value proposition. It’s payment through actually tangible results, which is extremely attractive.

Understanding how to get the most out of any technology and being comfortable enough with it to experiment and innovate relies on having a digital capability, yet the UK seems to be severely lacking in digital skills.

Absolutely right. Among the main hurdles companies have to overcome is not just what are we going to do, but who is going to have to do it or where do we get the knowledge from. That’s a big problem. 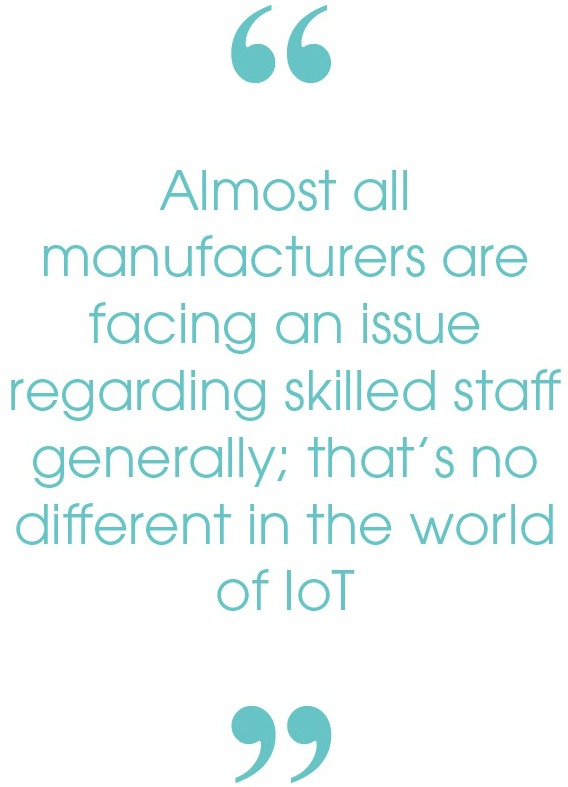 Almost all manufacturers are facing an issue regarding skilled staff generally; that’s no different in the world of IoT. Even the basic understanding of IoT technologies, i.e. what it can do, how to implement it, how you go about designing something, what sort of services might be useful, is lacking. The people who understand these things are definitely in short supply.

Encouragingly, a lot of the products that a company can use to build an IoT solution are cloud-based, so they don’t have to be located onsite. Certain skills are needed to embed sensors and mechanisms in order to relay data from software out in the field to your back office and vice versa, but most companies will be able to do 90% of that with people that are unskilled in this domain, yet have an understanding of what it is that needs to be measured.

What about the UK’s level of broadband connectivity?

There is a focus around bandwidth on broadband being an issue in the UK particularly, but it’s not as bad as people think. There are obviously certain compute situations which require transfer of huge amounts of data, but that generally isn’t the case. Of greater concern is the availability of cellular connections.

If you have an excavator, for example, which happens to be in a very remote location, how are you going to collect data from that device and how do you make that information useful? First, what information do you need on the device to make it valuable? Second, what data do you need instantaneously versus, say, a weekly report?

That’s where ‘edge’ devices come in, allowing you to compute close to the device concentration, either in your factory or out in the field. The digger, for example, may be fitted with an edge device that provides the compute capability allowing you to have the data required at the time you need it, and the rest of the computations can be done remotely at other times. You don’t necessarily need instantaneous analytics all of the time. This tends to be forgotten.

What was the most surprising revelation from the study?

How many people were active or are planning to be in the IoT market. IoT has clicked with a lot of companies. They may not have started or done anything as yet, but the benefits and business case are clearly understood. Equally, there’s a group of companies who are nowhere near; that’s very worrying.

This survey definitely needs to serve as a wake-up call. There’s a degree of urgency I’ve not seen in other manufacturing domains for a long-time, if ever. Industry has gone through cycles of technology in the past, but this is one which is going to be a commodity – arguably, it already is.

Certain companies are still viewing IoT as something interesting and potentially worth exploring in a couple of years’ time. They ought to be looking at it now and considering it seriously, because the majority are.

There is a perception that IoT is an ‘all or nothing play’, but that’s absolutely not the case. Companies can do things at a very low entry cost which provides an ‘in’ and some basic knowledge. A degree of competence needs to be built up, but it’s a transition and companies can start small.

Does starting on an IoT project mean that a company absolutely has to create a new product? Possibly, but there’s also the argument that retrofitting should be explored first. Vibration, temperature, light sensors, for example, can often be quite easily retrofitted into devices or machinery. Crucially, it’s about whether or not you can use them valuably.

Equipment manufacturers already have a lot of control circuitry and smarts in their devices, but it’s only when a service engineer is physically in front of it and plugs in their diagnostic machine are they able to find out how it’s running. Making an interface to take that data and transmit it back to the factory is not that complex because you can buy a lot of what’s needed off-the-shelf quite cheaply.

It comes back again to servitization, which is absolutely a natural bedfellow to IoT, and from the results, is one of the things that people first consider when they think of IoT.

So, where does a company start?

There will be a lot of adjacencies, people doing things in totally different markets that a company could re-purpose in its own. Also, don’t be too limited in your focus. IoT technology is similar to computing, the underlying platforms can do an awful lot.

Look at what others are doing in completely different sectors or industries, because some of it can be very applicable to your company.