Another giant leap for the UK space sector

Following the first landing of a satellite on a comet in November, TM looks at a thriving UK space sector and what opportunities it holds for UK manufacturing.

Between the Virgin Galactic crash, Antares Rocket exploding on launch and another Russian Proton rocket failing to deliver a satellite to the right place, it seemed the odds were stacked against the Rosetta space mission’s attempt to be the first to successfully land a satellite on a comet.

But the pessimists were hung out to dry when cheers and squeals of excitement filled the Rosetta space mission’s viewing platform at 16:03 on November 12 as the Philae lander touched down on the comet, 67P/Churyumov-Gerasimenko.

After a decade-long journey through space, scientists and engineers looked on in awe as the lander’s downwards-looking ROLIS descent camera in combination with the orbiter’s OSIRIS images showed the device landing, failing to deploy its harpoons effectively and bouncing from the surface in the atmosphere for a further 110 minutes. In that time, Philae travelled 1km at a speed of 38cm/s, making a smaller hop, travelling at 3cm/s and landing in its final resting place seven minutes later.

Since its touch-down data has been collected to reveal its location, ESA has narrowed down Philae’s positioning to two small patches of land. Once its location is identified indefinitely the team will be able to fully analyse the data.

Universities, Science and Cities Minister, Greg Clark watched the landing on a visit to Airbus Defence & Space in Stevenage saying: “Rosetta has captured the world’s imagination, and the mission is a real testament to British engineering and technological expertise. I am very proud that a major part of the Rosetta platform was built in Britain here at Airbus.” 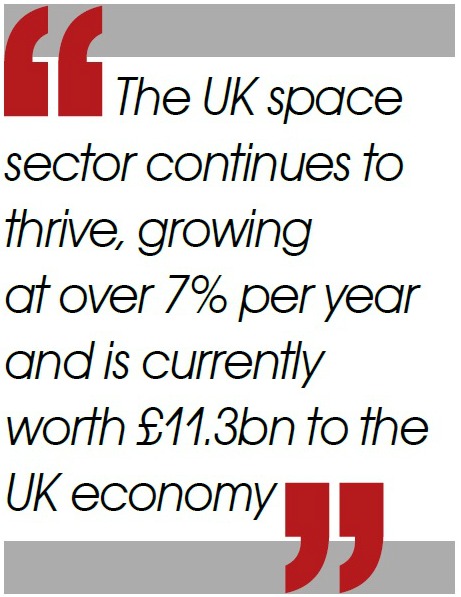 This historic event has placed the spotlight firmly on the space industry’s potential to create new business opportunities in the same way that Silicon Valley and an entire global industry has arisen from the Internet.

Already Deep Space Industries and Planetary Resources have plans to mine the asteroids, with some single chunks of space rock already valued at more than $100bn. Chinese ambitions to mine the moon for the nuclear fuel helium 3 are also a viable prospect, while the Japanese space agency recently revealed a technology road map for beaming energy to Earth from solar power satellites in the 2030s.

The UK space sector continues to thrive, growing at over 7% a year and is currently worth £11.3bn to the UK economy. With more than 5,000 jobs created in the last two years, it employs over 34,000 people and supports a further 72,000 jobs in other sectors.

This recent success coupled with Philae has certainly set the wheels in motion for the UK Space Agency to invest a massive £32m in global space industry partnerships to open opportunities for the UK space sector to share expertise in real-world satellite technology and services overseas.

The agency announced in November that grants would be awarded to British companies to work with international partners developing satellite technology to tackle issues like flooding, deforestation and humanitarian crises in emerging economies. These grants will be match funded by industry.

The International Partnership Space Programme (IPSP) is set to run for more than two years and will support UK companies to become partners to provide high-tech exports, thereby growing the UK space sector from strength to strength.

On the same visit to Stevenage, Greg Clark said about the grant: “This programme will help our international partners to take advantage of British expertise in satellite technology, services and scientific research. This funding will give even more UK companies the chance to work on these kinds of exciting projects so that more people can enjoy the considerable economic and social benefits that new space technologies provide.”

What does this mean for UK manufacturing?

Chris Barnatt, associate professor of Strategy & Future Studies at Nottingham University Business School told TM about the “enormous potential” presented for manufactures but highlighted that one challenge is that the “paybacks are long-term”. Without an immediate validation, manufacturers will be challenged to stay involved. The time element is another reason why Barnatt believes that in the future there will be a shift from government to private funding.

“Britain, unlike China, which is one of the only countries that has the political structure to make long-term commitments to space, and able to commit over 30 years or so, doesn’t have the structure do that. We are now starting to see more private launch capabilities. Private companies will do it properly or get out of business pretty quick. Whatever happens in space in the future will involve private companies. There is also a bigger pay off with private companies, because they will be better prepared to succeed,” Barnatt explains.

It seems more and more private companies will realise the potential benefits, for instance SpaceX, designer and manufacturer of advanced rockets and space crafts, has landed a contract to fly astronauts into space in a couple of years, offering launch services for people as well as cargo.

But it’s not just the long-term that will challenge manufacturers, according to Barnatt. “The immediate challenge is: how do you make materials in order to make this happen for that period of time and at that capability?” he says. “We are currently waiting for developments in nanotechnology to make some of these composite materials to make spacecrafts.”

Despite the challenges, there is enormous potential for manufacturers in the space industry. One area is 3D printing, an innovation that is like to significantly reduce the cost of space technology. In November this year the first zero-gravity 3D printer was set up on the International Space Station, as well as NASA’s most complex 3D-printed rocket part. It passed its first tests on November 8.