The power of young minds has played a key role in the launch of a new modular tooling approach that is enabling the rapid development of new nose clip designs for use in face coverings all over the world.

Brandauer, one of the UK’s leading metal pressings and stamping specialists, has employed six apprentices in the roll-out of its Quick Clip Tool modular tooling concept, which was one of the first in the country to win funding from Innovate UK’s Covid-19 Business-Led-Innovation in Response to Global Disruption fund.

Part of the Manufacturing Assembly Network (MAN), the company used £75,000 to develop a quick changeover capability to a progression tool, giving it the option to manufacture the clips in multiple profiles, widths, thicknesses and lengths.

It has given the Birmingham-based manufacturer the opportunity to win over £500,000 of reshoring business from Asia over the next five years and extends its production capacity to 100 million nose clips per year. This meets a 50% increase in demand from existing customers, as well as selling its own products direct to the marketplace. 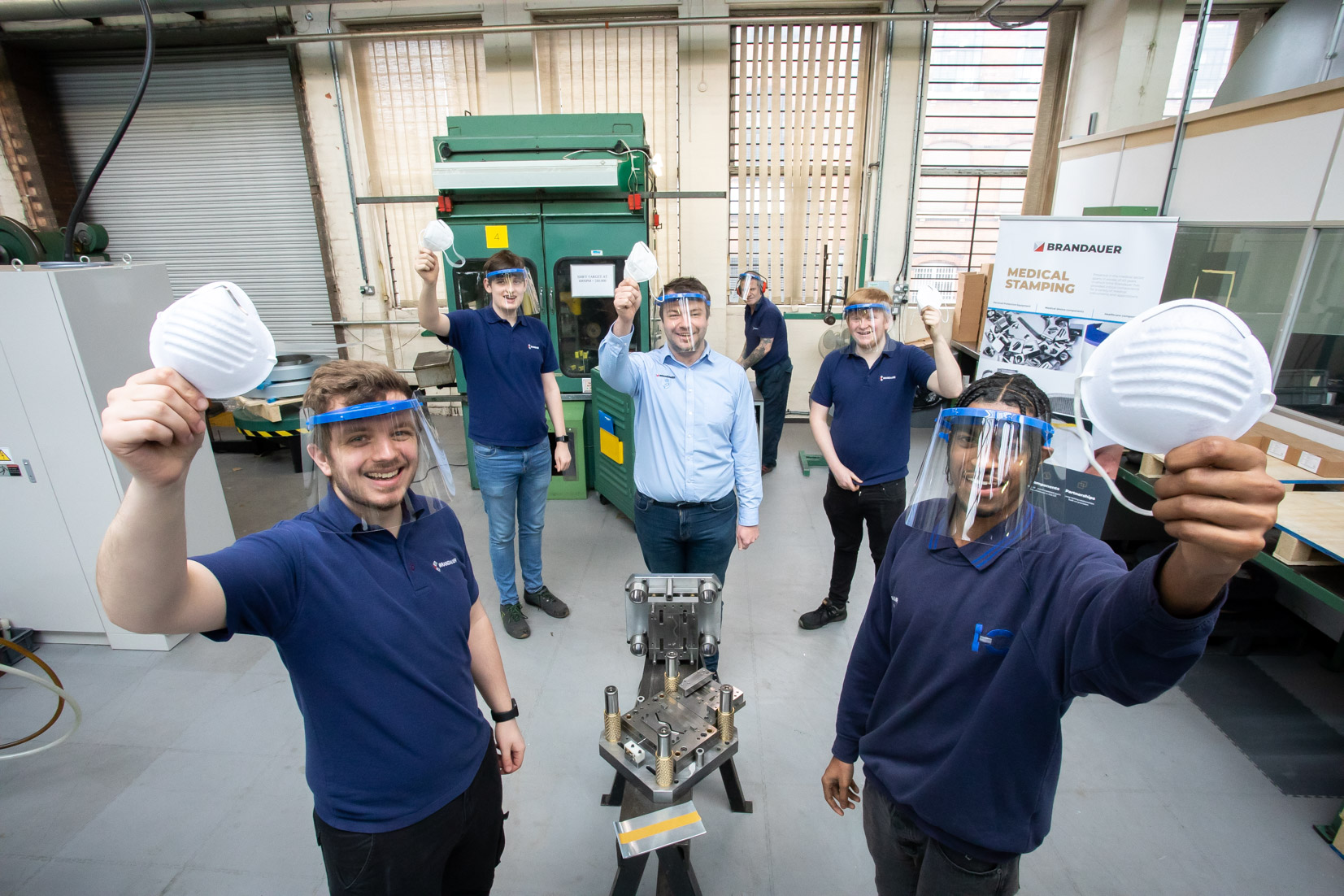 “Face coverings have become part and parcel of everyday life and we reacted very early on to ensure our position as a critical supplier was cemented,” explained Rowan Crozier, CEO of Brandauer.

“With funding secured from Innovate UK, we decided to get our young apprentices to lead on the project, with six of them chosen to work on the design, the prototyping, the product introduction and then the actual manufacture.”

He continued: “They were overseen by the senior management team, but intervention was rarely needed. Instead, we revelled in watching young engineers embrace a task that could save lives as well as being commercially viable for our business.”

Oliver Eskriett and Dean Jones were involved in the design and assembly of the progression tool, with Kaielum Kerr machining and manufacturing the different tooling elements.

Tom Crozier, a second year Quality apprentice, was in charge of sampling and first article inspection and then it was left to Will King and Kyle Morley to run production on the high-speed Bruderer UK press.

With apprentices now making up 15% of Brandauer’s total workforce, it came as no surprise that the project was managed by New Production Introduction engineer Alex Walton, himself a former apprentice.

Dean Jones picked up the story: “You can’t beat learning on the job and one of the great things about working here is the diversity of products you work on.

“This one was special. We all know the importance of face masks to protect against Covid-19 and this is our own small way of contributing to the fightback. It’s great that it has been a real team effort from the apprentices and that we’ve been able to put what we’ve learned into really good use.”

Established in 1862, Brandauer is one of the West Midlands’ best kept manufacturing secrets, producing millions of high tolerance metal pressings and stampings every week for customers in the plumbing, automotive, domestic products, electrical, medical and renewables sectors.

Most of the products it makes are invisible to the user, but fundamental in making many everyday items work effectively. These include electrical connectors that are fitted in 90% of the world’s kettles and edge connectors for the dimming of rear-view mirrors in 50% of modern-day cars.

Rowan concluded: “The modular approach of the Quick Clip Tool can be applied to all quick turn projects and is something we’re already using to produce suture blades, disposable razor blade substrates and surgical implant componentry.

“It reduces the cost and risk for the client by shortening lead times and using existing tooling. The nose clips alone are worth up to £500k per annum to us, whilst the potential of this technology could be worth four times that.”