Be prepared for new health and safety guidelines

Paul Matthews, Regulatory Partner at DWF LLP offers a warning to all manufacturers to be aware of hefty new penalties under the biggest regulatory change to health and safety sentences since the 1970s.

They represent the biggest shake up to health and safety since the 1970s, bringing fines on a par with offences such as competition breaches and bribery.

The guidelines link fines directly to turnover, and provide starting points and ranges for fines.

They will result in significantly increased fines, especially for large organisations, which are those with an annual turnover or equivalent of £50m or more.

In relation to health and safety offences and corporate manslaughter, the guidelines expressly state that where turnover or equivalent very greatly exceeds the £50m threshold, it may be necessary to move outside the suggested range to achieve a proportionate sentence.

Currently, a large organisation convicted of a serious health and safety breach could expect a fine somewhere in the region of £250,000 – £750,000.

The tarrif proposed under the guidelines could see that figure rise to between £2.6m and £10m, or up to £20m for a Corporate Manslaughter conviction. All of the tariffs can be found within the guidelines themselves.

While the guidelines would not cover Scotland, they are likely to be taken into consideration by Scottish courts, especially in the case of health and safety as the legislation is UK-wide.

They will apply to all cases sentenced from the February 1, 2016 regardless of the date of offence. The guidelines cover organisations, as well as individuals in varying capacities including directors and employees. 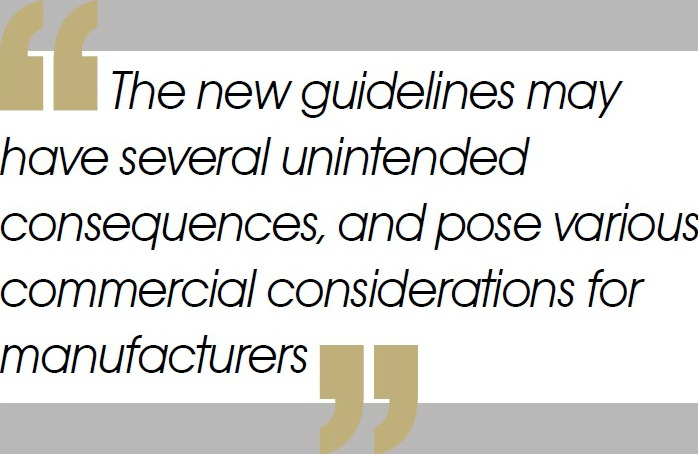 The reason behind their introduction in large part is due to the perception by Government that fines for these offences are too low for large corporates.

When a serious incident does occur, organisations need to demonstrate corporate resilience, be prepared to fully defend themselves from the outset and manage the situation properly, given potential consequences of getting it wrong.

The new guidelines may however have several unintended consequences, and pose various commercial considerations for manufacturers.

For example, turnover can be just one measure of financial performance, especially in the manufacturing sector where turnover may be high but profit margins low.

When Courts sentence these offences, there should be a much closer scrutiny of wider financial performance and management.

The manufacturing sector is already facing several economic challenges, these guidelines may be viewed as overly punitive, and could deter investment in an already difficult sector.

Will they impact on lending as banks start to assess health and safety risk as part of their lending criteria in view of the potential for much higher fines and the impact on cash-flow or underlying solvency?

Organisations may also consider hiving off riskier activities and consideration may need to be given to the existing corporate structures.