Barry Leahey MBE, CEO of Playdale Playgrounds, spoke to us about his company's transformational journey in to exporting and insists that if they can do it, anyone can!

Playdale Playgrounds is the largest UK manufacturer of outdoor children’s playground equipment. Back in 2009, they had only built a small number of playgrounds overseas. The company grew concerned with the UK market, after forecasting a shrinking industry over the next decade. This was where their export journey began. 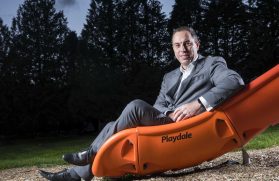 The Department for International Trade provided training and recommended an International Trade Adviser (ITA) who helped Playdale access a number of support services including the Overseas Market Introduction Service (OMIS). The support from DIT led Playdale to develop an action plan, which over the last 12 years has grown to have more than 700 actions.

Today, the company’s turnover is circa £11M. They have 85 employees and a presence in 50 countries through 38 distributers spanning the globe. 50% of their manufactured product is going abroad.

What prompted you to begin exporting in such quantity?

‘The financial crisis hit the UK in 2007/2008 and the playground industry in the UK was in an artificial bubble at the time. The government ring-fenced £255 million to develop children’s playgrounds. We had grown at that point in to one of the largest in the UK. We knew that was going to come to an end as this money was ring-fenced until 2010/2011.’

‘In March 2009 we said, what do we do? How do we diversify? We have got all this equipment and all these people that we have built up over generations. We do not want to lose that, so how can we continue to grow when the market is probably looking to constrict. At that point, we were forecasting the market to constrict by 30% over the next few years. Over the last decade it has constricted by 44% in the UK. We had beaten the best in the world over here, in what is the biggest market in Europe, which is the UK Play Market. So we decided to take on the competition in other countries as well.’

What have been the challenges on your export journey?

‘Many! I guess they come in stages; at the beginning it was a lack of knowledge, and then trepidation of gaining that knowledge. That came quite easily; there is an awful lot of information out there. I think we literally started by typing into a search engine “how do you export,” and we went from there.

From the initial knowledge then came the culture change in the business. I think one of the scary things was somebody from Wisconsin in the USA would ring, and we would say to ourselves, well it’s just the same as someone ringing from Walsall near Birmingham – they speak English, it’s nothing to worry about.’

‘Then there was the understanding of what quality is because once you enter a global market, you are then operating at world class levels, not UK class. Unfortunately, in the UK, we get a little bit carried away of what actual great customer service probably feels like. It was necessary to upskill everybody in our organisation to understand what world class is.

We have got a net promoter score of 84 which I believe is world class. It is because over recent years, we have worked so hard on the culture change, on the speed that we operate and how agile we are. All these plus points are part of export – but they have also contributed to some of the problems that we have gone through; they’re the growth pains that you have to go through.’

What would your advice be to other businesses thinking about expanding their international trade?

‘Get out there and do it, but do it with research. The globe is a very large place and the UK is a little island. There is so much opportunity and potential out there. Nobody has got a given right to be able to trade out there, but you’ll never trade out there if you never go and visit. Not giving it a go is a lot worse than trying and getting it wrong. So, get out there; you will learn an awful lot about your business, you’ll learn an awful lot about yourselves and about your potential. It will widen your mind in terms of what you can achieve.’

For related content from The Manufacturer click here, to listen to one of Barry’s success stories in export.