You’re planning to implement ERP, but how do you decide if you should introduce the new system in a ‘phased’ manner or go for the ‘big bang’ approach? 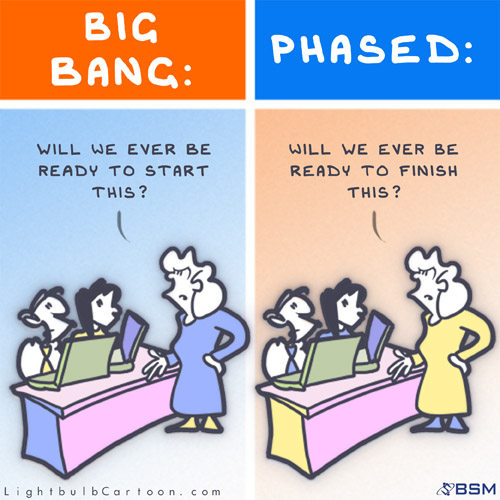 The phrases ‘big bang’ and ‘phased’ are used to describe strategies for introducing new systems into an organisation. A ‘big bang’ ERP implementation is typically used to describe a go-live or cutover scenario where a business switches from their old ERP system to their new system at a single point in time.

Both approaches have their advantages and disadvantages. However it’s important to point out that an implementation strategy doesn’t have to be limited to these two options.

This Blog was written by John Donagher, Senior IS Consultant at BSM. If you would like further information on ERP Implementations please send an e-mail to John Donagher at [email protected] or check out www.lumeniaconsulting.com

If you are currently looking for an ERP system, The Manufacturer is hosting ERP Connect on 20 May, 2014 in London. This unique event offers a one-of-a-kind opportunity for you and your team to see the best Enterprise Software Solutions in the world all in one place, all at the same time. Visit www.erpconnect.co.uk for more information.