Posted on 3 Jun 2015 by The Manufacturer

It’s difficult to miss the hype surrounding Big Data. Suddenly, the world has woken up to the potential that it offers.

Yet a lot of that potential is destined to remain unfulfilled, says Diane Palmquist, vice-president for manufacturing industry solutions at GT Nexus, the world’s largest cloud-based e-commerce network, which connects 25,000 businesses collectively carrying out over $100bn in trade.

“Big data has to be actionable,” she emphasises. “Big data on its own has no value. Everyone is saying ‘If we had more data we could run our businesses better’ – but it’s not that simple. It’s not just about getting the data, it’s about taking action on it.”

What sort of action?

Palmquist points to the massive supply chain disruption wrought by events such as the devastating earthquake and tsunami that hit Japan’s north east coastline in March 2011, or the floods that swamped Thailand in the autumn of that same year.

Japan’s earthquake largely closed down the country’s automotive industry, and left others severely damaged. Even months later, lower-than-expected GDP growth in the UK, America and Asia was still being blamed on the supply chain disruption caused by the tsunami.

In Thailand, the worst flooding for 50 years hit seven of the country’s largest industrial areas, causing factory output to fall by 36% in October. Two of the world’s largest manufacturers of hard drives, Seagate and Western Digital, had factories flooded, causing supply shortages and soaring prices. 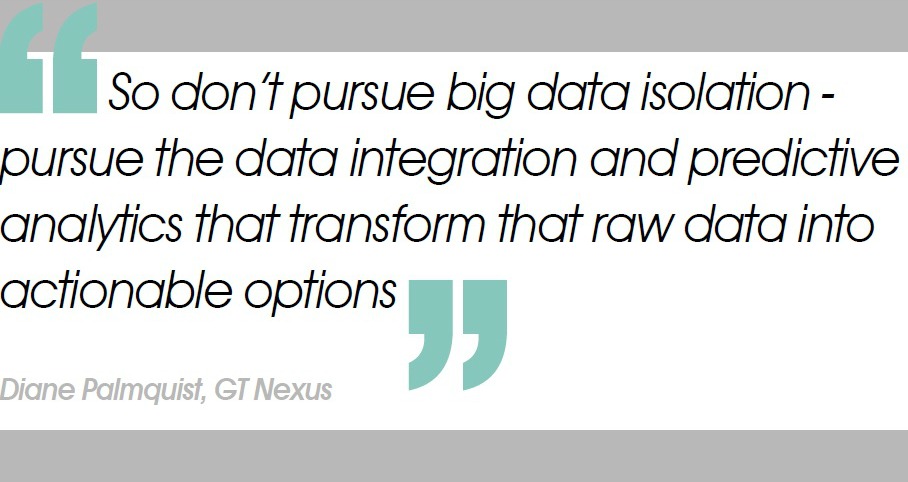 In both cases, huge numbers of businesses were caught out, says Palmquist. “Eighty percent of the supply chain data of a typical manufacturer lies outside the four walls of its own enterprise,” she points out.

“Instead, it’s in the systems of suppliers, partners, and logistics service providers. So it’s important to reach outside your own systems, into the systems of these other supply chain links – and then turn it into data on which you can take action.”

“First, gather the data: suppliers, ships, trucks, customs brokers – wherever it is, you need to get it. But each piece of the puzzle only knows about itself, not the other pieces of the puzzle. So the second step is to integrate the data together, to build a digital ‘picture’ of the supply chain.”

At which point, she continues, it’s then possible to take the third step: predictive analytics, so as to be able to spot anomalies – shipments which are destined to be late, for example, disrupting production unless alerts can be issued, and appropriate action taken.

But what action, precisely?

This is the key to the issue, stresses Palmquist. “It’s not just taking action: it’s knowing what options are available, so that you’re taking the right action, and following the best course of action,” she says.

“And it’s knowing what those options are that make big data actionable. So don’t pursue big data isolation – pursue the data integration and predictive analytics that transform that raw data into actionable options.”