Richard Noble and Bloodhound are (almost) ready to roll. As Nick Peters reports, you and your company might hold the key to getting the supersonic car to the starting line.

As anyone who has met Richard Noble will attest, if it was possible to capture human energy and turn it into fuel, Bloodhound would not need a Rolls-Royce jet engine nor a repurposed rocket to reach 1,000mph. Noble could power it all by himself.

His boundless enthusiasm for pushing boundaries seems of another age, when a certain type of Briton thought nothing of going deeper, faster, higher, setting records with a blithe disregard for personal risk. In that sense, Noble is from the same stock as Sir Ranulph Fiennes, adventurers and mavericks both.

There are notable exceptions in the modern era, such as the Austrian Felix Baumgartner, whose extraordinary sound-barrier-breaking leap from 39km up in space in 2012 so captured our imagination.

But, by and large, the modern world seems a trifle bloodless compared with the exploits of Scott of the Antarctic, Malcolm and Donald Campbell and their ilk – or Noble’s hero, John Cobb, whose flame he has vowed to keep alive.

Central to the Bloodhound SSC project is that for flames to be kept alive, new ones must be lit. This is why a condition of receiving initial government support for Bloodhound SSC was that it must be used to inspire young people to consider engineering as a career.

The former Science Minister Paul Drayson, speaking at the project launch in 2008, said, “The case for building the Bloodhound Supersonic Car goes well beyond any ‘Boy’s Own’ impulse, or the desire for national pride – attractive as they may be.

“Having the ‘right stuff’ in the 21st century requires the skills and know-how that a science and maths-based education provides. My ambition is for the Bloodhound project to be a catalyst for the next generation of British engineers. It really is critical that we inspire young girls and boys to think about engineering as a career.

“We need engineers in aerospace, in power generation, in defence. We need them to design and build the infrastructure for a low-carbon planet. Like Concorde or the Large Hadron Collider, the Bloodhound SSC car is the kind of iconic creation that will excite students.”

There should be no worries on that score. Bloodhound’s education outreach has engaged the delight and enthusiasm of hundreds of thousands of schoolchildren in the last nine years in pursuit of Drayson’s vision.

Visit the project website and watch the videos of ecstatic children screaming encouragement at the models cars they build and then race against each other. And, in the process, making the connection between what they did with their brains and their hands, and their car’s ultimate success.

But for all that to make sense, Bloodhound has to run, and it is agonisingly short of being able to do so.

The last mile is the longest

When one walks into the Bloodhound factory in Avonmouth, eyes are immediately drawn to the majestic car on the right–hand side, this wondrous piece of engineering genius that is designed, and destined, to travel at an unprecedented 1,000mph across the Hakskeen Pan desert in South Africa.

Except of course, it is not. This is simply a full-scale glass fibre model used for fundraisers and promotional events. The real Bloodhound lies in pieces on the left-hand side.

The Jaguar V8 engine that will act as the jet fuel pump, the Eurojet EJ200, a highly sophisticated military turbofan normally found in the engine bay of a Eurofighter Typhoon that will take the vehicle up to 600mph before the Norwegian-built Nammo rockets kick in to deliver the hell-raising thrust that will take pilot/driver Andy Green up to Mach 1.4; fuel tanks, cockpits, they all lie in wait for final assembly.

But there is a problem. Bloodhound is a few parts short of completion, and Richard Noble is asking manufacturers to step up to the plate to help create the final bits and pieces over the next few months.

At that point, when the machine is completed, it will be taken to Newquay Airport in Wales for a low-speed 200mph trial (using rubber tyres, not the purpose-built aluminium wheels designed to speed across the desert.)

“Bloodhound always needs help,” Noble told me with refreshing candour. (Although this is his project, he sees it very much as having a life force of its own, and that he is simply its guardian.)

“If you’re undertaking a project on this sort of scale, trying to change people’s thoughts and attitudes, it will always need help. We’ve done about £27m so far and we’ve got to the stage where we’re now just looking for the last 100 or so parts. We want manufacturers to make the parts, and make them to schedule.”

That’s right. Any manufacturer reading this can play a part in making the Bloodhound dream a reality. And they’ll be letting themselves in for a heck of a ride.

“This is engineering without a safety net,” engineering director Mark Chapman told me. “We have problems to solve that we don’t know exist yet. That’s why it is so exciting for manufacturers or designers who partner with us, it pushes them to places they’ve never been before, and is a tremendous challenge to their staff and their technologies.

“As for what we need, it’s a whole range of stuff: some small-scale composite components; some ducting and tubing; some three-axis and five-axis machining; and some additive manufacturing.”

When you consider that the completed car will contain about 3,500 parts (not counting rivets), this last hurdle may seem trivial, but it is real, and the appeal for help is genuine, just as the payback will be.

So far, Richard Noble estimates that the PR value that has been created by the project runs to more than £1.3bn, and that will only increase when the rubber hits the road this summer (and the aluminium wheels cut through the desert crust in 2018).

But it is about more than having one’s corporate logo emblazoned on the side of the vehicle.

“There’s a huge opportunity here,” he told me. “We have started to develop an enormous global following, we’re in 230 countries now. When we start running, we’ll be gathering the data from the run and it will be made available to all the people following us across the planet. All the companies who have helped support us will reap the benefit of this. Big time!”

Richard Noble’s confidence in Bloodhound’s ability not just to achieve a technical breakthrough, but provide a simultaneous boost to national morale feels strangely old fashioned, which is not to say he is wrong or misguided.

We are told to forget the Britain that was, and focus on the Britain that is, accepting limitations and containments that would have drawn scorn just a few decades ago. This is why it will be interesting to see how Noble does with his appeal for more money from sponsors, and possibly government too, and for manufacturers to help fashion the final pieces that will allow this magnificent machine to undergo its initial tests this summer, on its way to South Africa and a place in history.

Yes, it is a one-off. Yes, it will be the most expensive car ever built, and will travel no more than a handful of miles and yes, when  you look at it like that, it’s ridiculous. But the fact that government, business and hundreds of thousands of schoolchildren have been borne this far on a £27m wave of optimism, excitement and romance demonstrates that some things deserve to be looked at in ways that transcend mere financial calculation.

Three hundred and seventy companies have so far made in-kind contributions to an estimated value of £20m, so any manufacturer who steps in now to help Bloodhound will be in good company. Needless to say, Richard Noble is optimistic, not only that he will receive what he needs but also that there is a new mood in the country.

“We are seeing change, it’s coming back,” he said, “mind you, we did Thrust SSC some 20years ago and it was an absolute nightmare. I  think companies were frightened of us! They were worried that there was going be a big crash and their logo was going to be the last piece of bodywork left on the desert!”

Not perhaps an image that a more calculating PR mind would want to leave us with, but in land speed records, as in life, risk is always with us and our readiness to embrace it with confidence says more about us as a nation than mere spreadsheets ever will.

Manufacturers who believe they can help with making the last parts needed for the completion of the Bloodhound SSC should contact Bloodhound directly – and urgently, as it is vital that these parts are manufactured in good time in order to make the initial runs at Newquay Airport this year.

You can also get involved as a financial sponsor – again, if you want to make a specific contribution, contact Bloodhound directly – but smaller companies can buy a piece of history by joining the Composite Club, gaining global exposure for their brand in the process.

For just £1,500 +VAT a year you get a 25mm x 25mm square on the car to place your logo (or you can buy multiples of this space if you’d like a larger presence), two CGI renderings of the car, a PDF certificate and Club email signature.

The Composite Club logos will make up a mosaic on the side of both the full-scale show cars that are currently touring the world. The logos will also go on the real car when it does UK runway tests later this year and then deploys to South Africa next year.

Companies and institutions who get involved with the project report what they call ‘The Bloodhound Effect’, which is the potent response they receive in return for their input, whether it is a marked increase in registrations for aerospace and engineering courses at the Universities of Swansea and the West of England, who collaborated in the car’s design.

Or like Castle Precision, the Glasgow firm that machined the aluminium wheels, who reported an uptick in the numbers and quality of young people applying for apprenticeships. Or schools, where the enthusiasm among boys and girls for STEM subjects has been spurred by the Bloodhound Education Project road trips and sponsored model car races.

Whatever size piece of the Bloodhound Effect you’d like for your firm, contact Tony Parraman: [email protected] 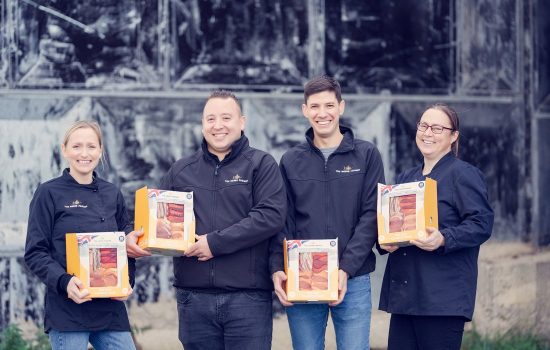