The government needs to hold its nerve and avoid rushing through a ‘clumsy’ Brexit plan that could do lasting damage to UK manufacturing and the wider economy, according to a new report out today from EEF and law firm, Squire Patton Boggs. 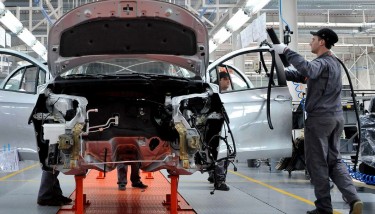 The report – Britain and the EU: manufacturing an orderly exit – spells out manufacturers’ key priorities for the forthcoming Brexit negotiations, and warns that supporting and protecting industry will be critical to ensuring post-Brexit Britain is a success.

With reportedly just 5% of UK adults regarding loss or damage to the nation’s manufacturing sector as a price worth paying for leaving the EU, the report calls for a measured and considered approach and for the UK to negotiate a bespoke deal recognising the special relationship it has with the EU.

While acknowledging that the government faces a difficult balancing act between free trade and controlling the movement of workers, it warns against rushing through a ‘clumsy’ Brexit plan that could do lasting damage to UK manufacturing and the wider economy.

Instead, it urges the government to hold its nerve and deliver a carefully-engineered Brexit that supports investment, ensures business certainty and allows manufacturers to play a full and unfettered role in helping the UK achieve post-EU economic and global trading success.

Key to this, according to the report, is for the UK to negotiate a bespoke deal – as opposed to agreeing to an existing off-the-shelf model (such as the Norway or Swiss models) – which specifically addresses the UK’s needs and recognises the ‘special relationship’ the UK has with the EU.

CEO of EEF, Terry Scuoler commented: “Manufacturers see great opportunity for jobs, growth and wealth generation from the expansion of global trade outside of the EU.

“These ambitions tally with those of the government and the voting public, who want to see post-Brexit Britain exporting and manufacturing more, as well as achieving a better balanced economy.

“At the same time, our report identifies concerns that our sector’s future success and ability to play its full part could be damaged if the UK fails to secure the right deal. The negotiations will inevitably require compromise, but manufacturing has a key role to play in the success of post-Brexit Britain.

“I would urge the Prime Minister to ensure that any new relationship works for our sector. This means maintaining unrestricted access to the single market and ensuring companies have the ability to hire and post employees across the EU – albeit with more controls in place.

“In the short-term we want government to provide regulatory and policy certainty, but in the longer-term there is clearly opportunity to pull back from EU regulation where it does not work for the UK.”

Rob Elvin, partner at Squire Patton Boggs, comments: “While our ability to trade freely with Europe is naturally of immediate concern to UK manufacturers, Brexit has provided an opportunity to create a longer term vision for international trade; one which embraces new and enhanced relationships with established markets like the US and China, fast growing emerging economies and regional trading blocs, such as the ASEAN and Mercosur member states.

“However, fulfilling the government’s ambitions that after leaving the EU, the UK will confirm its place as ‘one of the great trading nations in the world’ requires regulatory stability and continued access to financial support, to ensure our manufacturers remain competitive and have the best platform for future international success.

“The negotiation of international Free Trade Agreements must also be a priority, but it is important that these are struck after consultation with the industry to ensure that they deliver the best outcomes for British business.”

Three years of sustainable accolades for The Park