Stoke-on-Trent: From ‘pits and pots’, to bits and bots

For centuries, Stoke-on-Trent has been regarded as the ceramics heartland of the world. To keep pace with the demands of today, the city can’t rely on its industrial pedigree, it needs to offer cutting-edge technology and manufacturing excellence.

Johnson Tiles and Steelite International are just two of the local ceramics producers doing exactly that.

Ceramics are one of the oldest human inventions. The earliest pieces found are thought to originate some 12 millennia ago in the twilight years of the Stone Age. On the surface, not much would appear to have changed from a process perspective, but technological developments have reaped vast improvements in terms of quality, design and speed.

Developed in Italy in the 1970s, a roller hearth kiln transports a single line of wares through a continuous firing furnace via a series of ceramic rollers. In doing so, RHKs offer superior temperature and heat efficiency, enabling high speed firing, a rapid flow of product and significant energy savings compared to traditional fixed heating chambers.

“If your product was twice-fired in a brick kiln, it traditionally took roughly 16 hours per firing, 32 hours in total. Roller hearth kilns take that process down to just 30 to 60 minutes. It’s impact on the industry has been nothing short of transformational,” explains Stephen Dixon, managing director of Johnson Tiles.

The story of Johnson Tiles’ investment in RHKs – or lack thereof, and what it led to, should serve as both a warning and encouragement to any business facing disruption.

In the late 1970s, Johnson Tiles was a profitable, well-established business with a dominant market share in the UK (circa 75%-80%). In short, it was in the perfect place to invest in and embrace new process innovations. The Johnson family chose not to.

Shortly after, the Company was sold to Norcros plc, which is still 100% shareholder. For the next decade, the business effectively stood still while the market around it grew significantly. 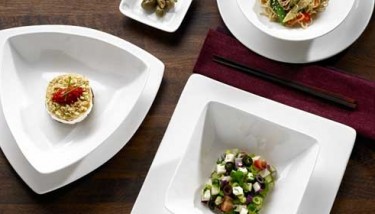 Having weathered the 1991-92 recession, Norcros made the decision to invest heavily in manufacturing in the UK to the tune of £35m – a substantial sum given that the business turned over around £50m at that time. It relocated several tiles factories across Stoke-on-Trent onto one, purpose-built, cutting-edge site. But by that time, the business was playing catch up.

By the crash of 2007, the business was making a reasonable profit, but not at the level Norcros wanted for the level of capital invested in the site. Yet, Johnson Tiles achieved a “brilliant recession”, largely thanks to the “revolutionary” advances in inkjet printing.

“We had been watching the technology’s development over the years very carefully,” says Dixon, who become MD in 2008 having spent the past decade with the business in executive marketing and finance roles.

“An Italian business had finally perfected the technology, in our opinion, enabling a manufacturer to produce photo-realistic designs on its tiles. Only a very small number of businesses globally had taken it up at that time, about 20, and Johnson Tiles was the first UK manufacturer to install digital printing equipment.”

At a cost of around £650,000 for one machine, what made inkjet printing so transformational?

“A tile blank is stamped out using compressed clay dust – clay, sand, limestone and crushed up broken tiles. It’s very fragile and the previously employed techniques of silk screening and rotor printing are both contact printing. It resulted in quite a high volume of breakages,” Dixon continues.

“The other limitation with contact printing is that after you’ve pressed the tile, the stamping mould leaves the edges slightly curved. That means you can’t get right to the tile edge. Engineers worked to get that frame smaller and smaller, but it can never be eliminated entirely because of the nature of the process.”

Inkjet technology solves that inherent issue, as well as offering greater variability of design, almost double the resolution and a cheaper manufacturing process because it generates less waste. More importantly, it looked better from a consumer perspective, “chalk and cheese”, describes Dixon.

“We thought that the difference in product was so distinct that it would offer, at best, a six-month lead on the competition. The recession provided us with almost three years because businesses hadn’t got the funds to invest. We quickly installed more inkjet printers, and towards the end of the recession we invested in a new kiln. We were probably the only factory in the world that year to increase capacity.”

In the face of such disruption, Dixon and his team look to identify niches where the business can offer a differentiated product and continue to lead the market.

Most of the tiles produced here are small format, and we believe, from a manufacturing perspective, that this is an area where we can truly differentiate ourselves,” he explains.

“We’re cost competitive on a world-scale because how we make small format tiles is more efficient than anyone else in the world thanks, again, to being among the first to introduce cutting-edge technology.”

“When you manufacture small tiles, the number you handle each minute is a lot higher. Johnson Tiles was only the second factory in the world to install an advanced robotic packer capable of handling and processing small tiles very quickly and performing multiple tasks at once.”

Packing is the last step in what is a highly automated line. The factory spans 25 acres yet is overseen by only 35 – 40 people per shift. For the most part, nobody touches a tile during the entire production process; the first and last person to touch one of Johnson’s tiles is the person affixing it to the wall. Self-guided vehicles even carry the cages of decorated tile blanks from the production line to the kilns.

“Variability is a huge challenge. We dig material out of the ground, place it in an oven and do it 3 million times a week and expect the results to be the same every time. Our losses from start to finish are around 20%, a lot of which is due to inconsistency of the raw material and the production environment.

“As a result, we measure every stage of the process to death. We need to know where volume is being lost and why, and, more importantly, what we can do about it.

“We’ve recognised that we spend too much time collecting data and not enough time using it, so we’re investing in a new system that won’t necessarily gather greater volume than now, but the data going to be far more accurate, in real-time and automated. The person with a clipboard is now free to focus on continuous process improvements.

“This new system means we spend, objectively, no time collecting the data and more time analysing it and gaining insights.”

The company can trace its roots back almost 150 years and has been leading the market since 1983 when Steelite International plc was officially formed. Over the years, the business has either fully or semi-automated several processes, including pressure casting or manual handling in the casting and presshouse; but for the most part, production is largely still manual.

“We have certainly invested in a new kit and kiln technology in recent years; however, part of our USP is the skills of our workers. I couldn’t imagine decorating, for example, ever being automated, especially for our unique ‘Craft’ range,” says group HR director, Louise Griffin.

‘Craft’ is inspired by hand-crafted, simple country wares made by generations of potters over hundreds of years and has proven incredibly popular around the world. The range celebrates the chance effects of glazes applied by hand the chance effects and reactions which occur naturally in the kiln.

“Asian competitors have tried to apply a lithograph to mimic the ‘Craft’ look, and though each individual piece looks unique, you can see they are all the same when you collect them together. The pieces just don’t carry the same texture, feel or pleasing aesthetic,” explains group finance director, Jon Cameron.

One area where the power of technology is most definitely being brought to bear is traceability. It’s a challenge that isn’t unique to Steelite, but the business’ location and growth has unquestionably multiplied the challenge.

The site is situated on an incline bordered by a canal on one side and a main road on the other. With little room to expand sideways, the only option was to go up. With different processes taking place on different levels, knowing exactly where a consignment is and at what time can be tricky with product disappearing and reappearing somewhere else entirely a day later.

What makes it harder is that tableware isn’t like a typical manufacturing process, where products move from point A to point B in a logical fashion. Instead, items can go from A to B, then possibly E and come back to C, then it might go back to A again.

“When you’re producing 36 of something bespoke for a client and you’re making 500,000 in a week, it’s very easy for those 36 to get lost in a certain part of the factory. Unless you barcode every individual item, traceability is a real challenge,” adds Cameron.

To address the issue, the business invested in a new state-of-the art, multi-million-pound ERP system at the start of 2018. The implementation required a certain amount of time and effort to bed-in, but it is already paying dividends in areas such as production planning, stock visibility, forecasting and improved customer service, to name just a handful.