Can the Northern Powerhouse be realised?

With the government’s plans to empower the North now two years old and faltering, Fred Tongue looks at what has been achieved so far and what industry wants.

When it was first announced, the Northern Powerhouse was a real power play by the government. It promised to invigorate the North with fresh investment, help to stimulate growth and to rebalance the North-South divide.

Since the announcement in 2014, plans seem to have stalled and a new cabinet has complicated the situation further by providing no clear guidance on their policy towards it.

Matters were not improved when Jim O’Neill recently became the first member of Theresa May’s parliament to resign over the Northern Powerhouse. He did not give specific reasons for leaving, but cited concerns that there was a lack of commitment to the project.

Since May has taken power there have been accusations that the government has let the initiative slip down its list of priorities, amid worries that the £13bn earmarked for the project isn’t genuine, with some of that money set out for pothole repairs and motorway maintenance.

The core cities for the project are Leeds; Liverpool; Newcastle; Manchester, and Sheffield. There are plans to improve the M1, so that access to northern cities is easier, as well as improved rail links from London and between cities in the North.

Transport is one of the main cornerstones of the project, with phase two of HS2 linking London with Leeds, Manchester and Sheffield, while HS3 will provide a high-speed rail link between Manchester and Leeds.

The thinking behind greater rail and road links is that the North’s infrastructure and supply chains can become far more robust, giving manufacturers greater agility to react to the market. Whether it means getting raw materials to the plant or shipping the finished product afterwards, there’s little doubt that investing in infrastructure will be of great importance to northern industry.

The only issue with this investment is that it’s not in keeping with investments further south. The cost of the trans-London CrossRail project is estimated to be £14.8bn, however many are already predicting that the project will overrun. Currently, there’s no comparable infrastructure project in the North of England on the same scale, the closest being the Liverpool Superport, which will cost just over £1bn.

The only similar project for the North is HS3, which will link Manchester and Leeds, but this hasn’t even been formally agreed or had a formal budget allocated to it. This disparity in investment has been touted as a failure to address or rebalance the North-South divide.

The response from industry to the Northern Powerhouse has been mixed, with plenty praising the idea, however many are critical of the lack of direction. The government has not outlined any kind of indicators or measures for success.

According to Zoe Brimelow, brand director at Manchester-based polythene packaging manufacturer Duo UK, there is still a very obvious divide, “There’s still a feeling of ‘us and them’ with regards to people who live in the south – personally, I’d love to see that gap closed and for the UK to be considered as much more unified,” she said.

Is devolution the answer?

Chris McDonald, CEO of the Middlesbrough-based Materials Processing Institute (MPI), believes that for the Northern Powerhouse to succeed, devolution needs to be one of the outcomes.

“This is an opportunity for those cities and regions that want to, to experience a greater degree of control over their own economic development. I understand that this is not the right answer in every region, but where there’s a will and a need for greater local control, the mechanism is now in place to achieve this,” McDonald commented.

Devolution has been promised as part of the Northern Powerhouse initiative and according to Sajid Javid, the Secretary of State for Communities and Local Government, “Handing power back to Northerners is a key part of our plans to build a Northern Powerhouse, and our focus now will be on working to secure a new agreement for residents in those areas committed to progressing with devolution.” 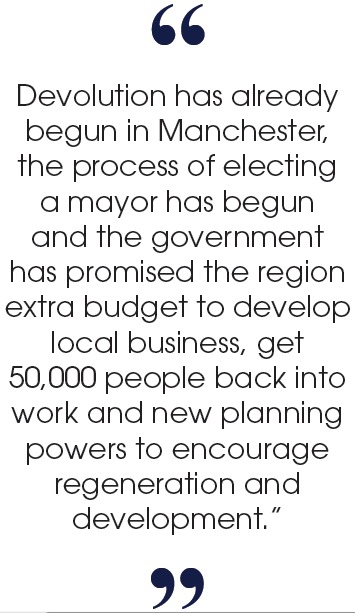 He said this in the wake of the North East voting to turn down a devolution deal, which Javid has said is now “off the table.”

John Trickett, Shadow Secretary of State for Business, Energy and Industrial Strategy, said, “Labour firmly believes that devolution is essential to bring prosperity back to the regions. We have been critical of the Northern Powerhouse idea in the past, for devolving spending cuts rather than investment, and for forcing Northern cities to compete with each other.

“But the Prime Minister has shown a distinct lack of enthusiasm for the Northern Powerhouse since taking office, and it doesn’t help anyone if the idea loses steam without an alternative plan in place for revitalising Northern industry.”

Brian Palmer, CEO of Northumberland-based Tharsus, believes that the Northern Powerhouse has yet to find its footing. “There appears to have been fragmented development across the North of England as a result of the varied pace with which different cities have taken up devolution.

Industry seems to be relatively ‘on-message’ as regards to what the outcomes should be. Devolution to the different cities and regions in the North seems to be a desirable outcome for manufacturing, however it has to be devolution of legislative and financial powers, and not just the ability to reallocate current funds.

The Northern Powerhouse received the backing of Chinese President Xi Jinping on a visit to the UK in October 2015. After an endorsement like that you would expect a large amount of investment to flood into the area, but as yet, this hasn’t been forthcoming.

This goes to show that despite Chinese endorsement and previous government backing, there has not been an increase in investment in the sector. The future for the Northern Powerhouse is therefore somewhat murky at the moment. It is in the hands of a government that has been accused of putting it on the back burner.

Despite expressions of support from China, investment has not increased in-line with expectations. The devolution of power has not been a smooth process and industry isn’t exactly sure of the direction that it’s taking.

What can be agreed is that investment in transportation can only be a good thing, allowing goods, services and people to travel more easily. Devolution has already started in Manchester, the process of electing a mayor has begun and the government has promised the region extra budget to develop local business, get 50,000 people back into work and new planning powers to encourage regeneration and development.

If similar deals can be agreed in Liverpool, the North East, West Yorkshire, Tees Valley and Sheffield regions then the Northern Powerhouse could yet become a force to be reckoned with.