The old joke, ‘Invented in Britain, developed in the US, made in China, sold everywhere’ may be an exaggeration, but it contains an important lesson for UK manufacturing – ideas are necessary, but they are not sufficient to build a successful future. Richard Hill reports.

The jet engine, the microchip, float glass, stainless steel, vulcanisation of rubber… the UK has never had a problem with that 1% of genius earmarked for inspiration – but the 99% from perspiration?

True, in many cases those eureka moments have been converted into profit within the UK, but too often our ideas have been taken overseas to reach commercial maturity.

Graphene is a case in point. Created at the University of Manchester in 2004, its commercial exploitation is happening more in China and the US. And this narrative extends beyond exciting innovations; the more mundane, incremental improvements in applications and processes also tend to flourish commercially outside the UK.

At NatWest, we’ve been monitoring how manufacturing views itself to get a sense of the sector’s future threats and opportunities. One headline from our research is the lack of inter-connectedness among manufacturers – many SME-sized businesses are too focused on the here and now to innovate fully and collaborate with UK-based peers.

This research underlines the need for the nation’s Catapult centres – hubs of excellence where companies can experiment, collaborate and innovate with the stated aim of becoming fit for the future.

Perhaps the best-known example to readers of The Manufacturer is the High Value Manufacturing (HVM) Catapult. This has been steadily emerging as a key source of advice and mentoring for UK manufacturers in many sectors.

Established in 2011, and backed with more than £200m of government investment, it brings together seven technology and innovation centres around the UK, including Sheffield University’s Advanced Manufacturing Research Centre (AMRC), the Warwick Manufacturing Group (WMG) in Coventry, and the National Composites Centre (NCC) in Bristol.

Consider the AMRC, it researches and resolves advanced manufacturing problems with the help of more than 500 academics, researchers and engineers. The centre’s 80-plus member firms range from global corporates such as Boeing and Rolls-Royce to local small businesses.

But catapults aren’t just a nice idea; they are a critical element of commercial success. They provide real, tangible insights into technological developments, and allow progressive businesses to understand the latest technology that’s not just relevant today, but also what a business might use in five years.

Take The Advanced Propulsion Centre (APC), for instance. This £1bn, 10-year match-funded commitment between government and the automotive industry addresses head-on the change to low-emission forms of transport.

It has become a hotbed for industry-wide collaboration between innovators and producers of low-carbon propulsion systems, bringing together academia, entrepreneurs and industry stalwarts to best seize on innovation.

Fit for the future

As the name suggests, catapults orientate around the future, with change and development at the core. There are other notable examples of them, but aside from the work they do and the progress they achieve, UK manufacturing can only thrive through being more interconnected.

In the specialised world we are moving towards, we can’t get by through simply dreaming up great ideas – we have to follow them up with focus and collaboration, the all-important perspiration.

For further insight into the future threats and opportunities facing UK manufacturers, download NatWest’s Future Fit: the road ahead for UK manufacturing report at: natwest.contentlive.co.uk/futurefit. 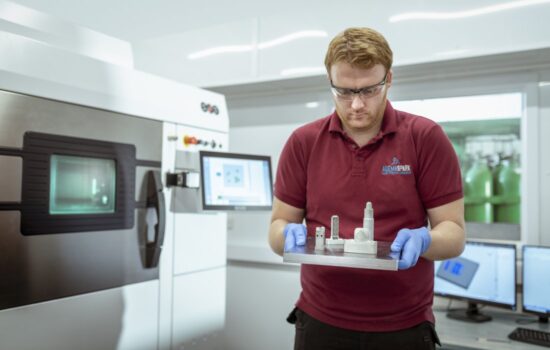