Cheese into vodka! The benefits of a circular economy

A seamless circular economy is an enviable strategy for businesses. One manufacturer reaping the benefits of such a mindset is the world’s oldest cheddar maker, Barber’s, whose cheesemaking by-products are being made into infant formula products, used in energy creation and even turned into vodka.

With a heightened focus on sustainability across sectors (and the world) in the last few years, manufacturers are steadily looking to implement more sustainable operations.

Somerset-based and sixth-generation cheesemaker, Barber’s, produce over 80 tonnes of cheese every day. The business source the milk used to make it from local dairy farms in the South West region.

When the milk arrives onsite, it is tested and once approved it is split into curds and whey. The whey is removed and the curds continue to be processed to create their award-winning hard cheeses.

“Cheesemaking is the core of the business, all of the milk goes into that process, but about 85% of the milk is removed in the form of whey,” director at Barber’s, Giles Barber tells me at the Somerset site.

The team at Barber’s uses the entire milk fraction, the curds, whey and water. He explains, “We separate any residual butterfat from the whey and that goes into making farmhouse butter.

“We then take the liquid and process the whey protein through a sophisticated membrane and concentrate it to the right level to be used in infant formula products. All of it is exported outside of the UK to infant formula factories in places like the Philippines, Thailand and Australia.” 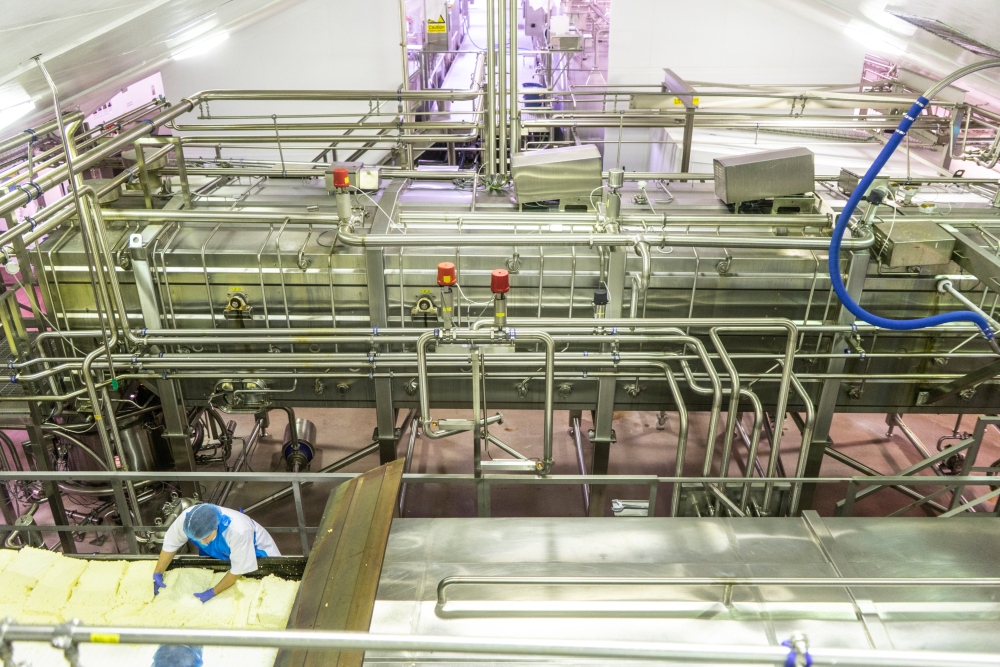 The circular economy concept means that when a product reaches the end of its life, its materials are kept within the economy wherever possible.

Barber adds, “The last part of the process is to separate the lactose. We separate this into a concentrated serum that then goes to either be fermented and distilled to make vodka – we have a cousin [Jason Barber] who has a brand called Black Cow Vodka – or it goes into anaerobic digestion plants for energy creation.”

How to make vodka from milk

To make the vodka, a first of its kind, the whey is fermented into a ‘beer’ using a special yeast that converts the milk sugar into alcohol. This ‘milk beer’ is distilled and treated, the vodka is then triple filtered and finished, before being hand-bottled.

Barber says, “The final by-product is water, which we use to wash down and clean the cheesemaking areas. Once that has been done, the water is then piped a few miles underground to a purification plant where it is cleaned to a standard that allows us to put it back into the water system. It is often cleaner than the river it goes into, so it is improving the river water quality.”

A few years ago, the site set about integrating a new measuring system to improve efficiency.

Plant manufacturing lead, Joe Claffey said to The Manufacturer on a visit earlier this year, “We added load cells onto tanks to measure weights, automated valves to control the flow of liquid and a number of mass flow meters.

“The SCADA system is measuring everything, recording and logging all the batches, making the process quicker and totally consistent. The new system, coupled with the expertise of our liquid processing team, has enabled us to operate much more efficiently and has allowed us to increase plant output significantly.”

The greater control of the plant via the SCADA system has also enabled First Ireland Spirits to focus on making their plant more energy efficient.

As a member of Origin Green (the Irish government’s food and drink sustainability program), the site has been working towards becoming more environmentally friendly.

“In 2015, alongside the new SCADA system we installed an energy buffer system. This has allowed us to reduce our electricity consumption by 22% and our diesel consumption by 16%, something we are proud of as a site, we are continually looking to improve our sustainability,” says Claffey.

Why is a sustainable model important?

Not only does a sustainable model save and make money; in Barber’s case using the by-product water to clean the cheesemaking areas, and selling the lactose to energy creation plants, it helps drive sustainable production, thus conserving natural resources, and, it just makes sense.

First Ireland Spirits also proves that by integrating environmentally-friendly concepts with business strategy in mind, production can increase, energy costs are reduced and so profits are driven up.

The main challenge is the implementation and understanding of where sustainable methods can be introduced. This could take time that some businesses don’t believe they have short-term. However, long-term it is a necessity, and manufacturers are engaging and acting on their 21st century circular economy strategies.