The roots of the UK’s chemicals industry extend deep into the past and it is still a vibrant element in the UK economy. Ruari McCallion takes a litmus test. 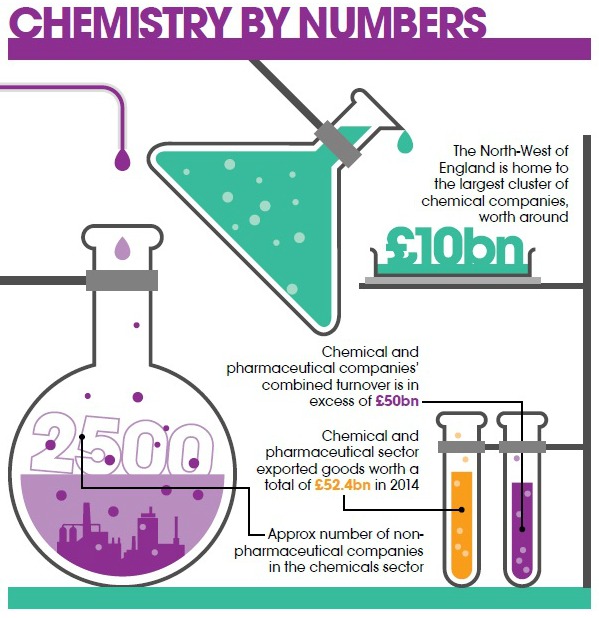 Any consideration of the UK’s chemical industry cannot ignore the role of ICI – Imperial Chemical Industries – which was, for almost 70 years, the country’s largest manufacturing business.

Agrichemical products included herbicides and other pest control agents. It made soda ash products and its Nobel division made explosives. Britain’s industrial landscape owes a lot to ICI but this is not mere nostalgia; the legacy persists today.

It was stimulated to divest to a more manageable structure after rebuffing an attempted takeover by Hanson Corporation in the early 1990s. The pharmaceutical side was spun off and became AstraZeneca PLC. It bought Unilever’s speciality chemicals business of Unilever in 1997 and sold it to WR Grace the following year.

The Nylon business went to DuPont. It moved away from commodity chemicals and sold Tioxide, its titanium dioxide business, to Huntsman. Industrial chemicals went to Ineos; the remaining company, focused on paints, was acquired by Akzo Nobel in 2007.

Of course, ICI was not the only chemical giant in the country; Unilever (previously Lever Brothers) had – and continues to have – a strong presence as well, especially in food, cosmetics and personal care.

The chemical industry in the UK is now around 70% foreign-owned but its roots are deep and long-lasting. The chemical business has high barriers to entry; building new facilities is expensive and so companies have an incentive to retain what they have.

Most of the former ICI sites are still functioning and mostly doing so quite healthily. There are around 2,500 non-pharmaceutical companies active in the chemicals sector; pharma companies total another 500 or so.

According to the Chemical Industries Association (CIA), the chemical and pharmaceutical industry is the second largest manufacturing sector in the UK; only the food industry contributes more to the domestic economy.

The gross value added (GVA) by chemical and pharmaceutical industry was approximately £15.2 billion in 2013. The split is unequal; the non-pharma chemical enterprises contributed approximately £8.8bn, with £6.4bn coming from the 500 pharma operations.

The Office of National Statistics (ONS) UK Labour Market report says that there was an average of 157,000 jobs in chemicals and pharmaceuticals in 2014, which is an 8% increase over the year before.

Chemicals and pharmaceuticals are strong foreign currency earners; they exported goods worth a total of £52.4bn in 2014 and the trade surplus – according to the ONS UK Trade in Goods Classification by Activity CPA (08) publication – of the non-pharma sector was £2.75bn.

The performance of the pharma sector is harder to quantify because of the impact of illegal drug imports, which includes counterfeit and ‘pirate’ pharmaceuticals and was valued at around £2.7bn in 2009.

The CIA reckons that the pharma sector is in trade surplus, if illegals are excluded. Overall, given the difficulties in the Eurozone (our major trading partners), the industry can be regarded as performing rather well.

The Chemistry Growth Partnership is designed to facilitate long-term collaboration between Government and industry to address the key challenges and opportunities for the chemical sector.

The Partnership is comprised of business leaders from the chemical sector who have agreed to pursue key work themes around energy, innovation and supply chains in order to achieve 50% sector growth by 2030.

The EC takes more than half (57%) of the UK industry’s exports; North America takes 18% and Asia and Oceania together account for 11%.

What is the industry making – and exporting?

Actually, it’s quite difficult to be precise. The largest subsector, according to the Standard Industrial Classification (SIC) system, is “other” – i.e., chemicals not classified elsewhere; it amounted to 11% of the industry’s GVA in 2013.

Paints, varnishes and similar coatings, printing inks and mastics amounted to 7.6%; “other organic basic chemicals” was just behind, at 7.1%; and perfumes and toilet preparations accounted for 7%, according to the ONS Annual Business Survey.

The CIA suggests that the ONS Index of Production (IoP) gives “more timely” information on changes in industrial production than the Annual Business Survey, however according to the IoP, non-pharma chemical production expanded by almost 4% in 2014, compared with the year before and that strong growth in the latter half of the year and the first two months of 2015 helped the industry to achieve its highest level of output since August 2008 – just about the start of the recession.

On the other side of the coin, pharma production fell, although at a slower rate at the beginning of this year than had been apparent at the start of 2014. A number of reasons for the slowdown in the pharma industry have been put forward.

For many years it was argued that the UK’s National Health Service was a magnet for global pharmaceutical companies; its patient records and data, going back to the late 1940s, was claimed to be an invaluable resource for companies seeking to develop new medical products.

The strong pharmaceutical research and development infrastructure in universities across the country, including Imperial and King’s in London; Nottingham; Cambridge, and Manchester, was also claimed to be an attraction.

A number of drugs and therapies have been developed over the years, from penicillin – albeit that it was American companies who commercialised production – through the Tamoxifen breast cancer drug, Inderal beta-blocker and some interesting “accidental” discoveries, such as Viagra.

However, US company Pfizer, which owns the plant at Sandwich, Kent, where Viagra was discovered, announced in 2011 that the facility was to close. At the time of writing, the site is still open but with a much-reduced headcount. It also has a research facility in Cambridge.

According to Steve Elliott chief executive officer at the CIA, the future for the British chemical industry offers challenges and opportunities. Lower oil prices have put downward pressure on energy and feedstock costs; however, producers in the US are able to produce basic petrochemicals at much lower cost. 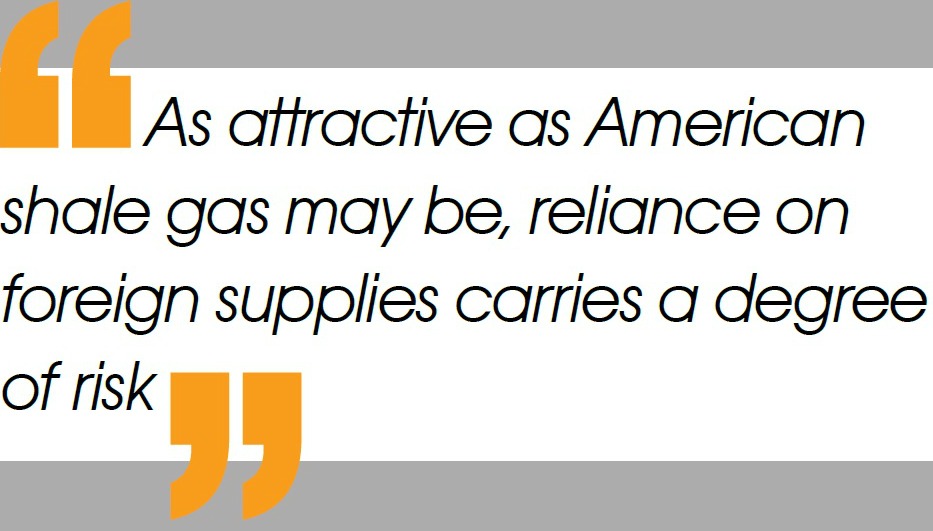 The weak European economy has reduced demand from the industry’s largest trading partner and reduced the value of the euro, which makes UK exports more expensive – but the European economies are recovering, subject to fallout from events in Greece.

US shale gas imports will be starting late 2015/early 2016 and this should lead to increasing demand and lower production costs. However, as attractive as American shale gas may be, reliance on foreign supplies carries a degree of risk – and that strengthens the case for the exploitation of domestic onshore and offshore unconventional oil and gas reserves, the Association believes.

Salt of the earth

The British chemical industry owes its foundation and existence to huge salt deposits, especially in the North of England and in Cheshire in particular. They attracted the Romans 2000 years ago and they are still productive today.

Compass Minerals UK’s salt mine at Winsford, in Cheshire, is claimed to be the oldest working mine in the country. The deposit was discovered in 1844, by prospectors who were looking for coal in order to make salt from brine. It’s 90% sodium chloride and currently provides half of Britain’s two million tonnes of rock salt needed for gritting each year.

Several towns around Winsford have something in common in their names: the suffix ‘wich’. It is an Anglo-Saxon name that refers to salt and brine; its production is referred to in William the Conqueror’s Doomsday Book.

The mid-Cheshire salt deposits were the foundation of the chemical works at Rocksavage, Runcorn, and – by extension – the agrochemical and petrochemical industries that extend along the banks of the Mersey upstream to Warrington and downstream to Stanlow oil refinery and on to Port Sunlight, near Ellesmere Port, where research and development of products ranging from soap to detergent has been undertaken for over 100 years.

Port Sunlight is home to Unilever’s Home Care and Personal Care R&D department, with major programmes for Hair, Laundry, Deodorants and Household Care based there. Unilever will be opening a new, £24 million, Advanced Manufacturing Centre in 2016 in Port Sunlight.

The 6,500 sqm Advanced Manufacturing Centre is supported by £4 million from the Regional Growth Fund and will house an advanced pilot plant, which will allow scientists and engineers to test and develop new personal care and homecare product ideas up to factory scale.

The company has also recently invested in a global IT hub; a new personal care factory; and the Materials Innovations Factory, which will be built at the heart of the science campus of the University of Liverpool. It will focus on cutting edge chemistry, formulation and high throughput product assessment.

Pharma faces a challenging future. It’s almost impossible to exaggerate the long-term impact of the discovery of penicillin and subsequent antibiotics, which was back before WW2. It was a revolution in medicine greater than anything in pretty much any other sector of industry or even society.

Maybe the internal combustion engine or the invention of electric power generation had something like the transformative effect – but they are not finding their efficacy undermined by new strains of microbes and biotics that have evolved to resist them. Pharma is faced with that.

It has been used to spending a lot of money on R&D, over many years – but to reaping huge rewards from it. Not all the ideas worked; indeed, the majority did not. But those that did generated such huge sums that the failures were well worth the risk. That era seems to be coming to a close.

MRSA (methicillin-resistant Staphylococcus aureus) is a bacterium that produces infections that leave doctors as helpless as they were in the era before antibiotics. Patients die of it and all modern therapies seem to be in vain.

Clostridium difficile (c-diff), a type of spore-forming bacteria, causes infectious diarrhoea. It is an opportunist that can bloom when antibiotics have successfully treated a different infection.

Not all bacteria are inimical to human beings; certain types of intestinal flora are essential and they can be compromised by antibiotics. C-diff seizes the opportunity and dives in, causing serious upset to the host’s digestive system and even death.

It’s reported to have killed around 29,000 people in the USA in 2011 (New England Journal of Medicine, 372). Most types of escherichia coli (e. coli) are completely harmless, some are essential to healthy digestion – and some turn on their hosts with a vengeance, causing serious food poisoning.

Outbreaks in Scotland, England, Wales, Germany and other parts of the world have resulted in thousands of deaths. One strain, E.coli 0157:H7, deploys the ultimate “poison pill” – the organism releases a toxin called the Shiga Toxin, which is classified as a bioterrorist agent. It destroys red blood cells, which then clog the kidneys and lead to strokes.

E.coli ESBL (extended spectrum beta-lactamase) is resistant to antibiotics and can cause septicaemia that overwhelms the body’s defence systems, leading to septic shock and inevitable death.

Against these enemies, the quest is on to find completely new lines of medical therapies. Where they will emerge…is anyone’s guess. Penicillin was discovered by accident. So was Viagra – but they both came about as the result of very deliberate and focused research.

The biotech sector in the UK is currently very small but it may have a part to play in the future. It’s not only a good idea to invest in R&D in these areas – it could turn out to be, literally, lifesaving.