Compound semiconductors: Can the UK retain its global dominance in the technology driving our future?

We are constantly regaled with how our future will be changed by advances in technology: 5G super-fast communications, autonomous vehicles, AI, and digital life at bewildering speeds. Rarely do we stop to ask what will power this technological acceleration.

Inside every smartphone are at least a couple of compound semiconductors (CS). Wonderful and life-changing though silicon-based chips have been (and still are), they cannot do all the heavy lifting required by the demands of the future, or even of today.

The reason you have a handful of CS chips in your phone is they alone have the capacity to manage 3G and 4G communications. But that is only the start of their versatility – they are at least 100-times more powerful than their silicon counterparts.

They can resist heat that would melt silicon, they are photosensitive, they are sensitive to magnetism, they emit light, require very low power, generate very high frequency signals and have extremely fast connectivity. And of course, they are very much more complex and expensive to create.

How is the UK able to claim global leadership in compound semiconductors?

The answer is a virtuous coming together of traditional British ingenuity, academic brilliance and an enlightened governmental strategy, particularly in Wales, that has helped create a dynamic cluster of CS companies in the Newport area.

In a few months’ time, this cluster will be augmented by the opening of a new Compound Semiconductor Applications Catapult in Newport. This addition to the Catapults network may be good news for the companies already at the pioneering edge of this technology and those who want to join them, but it is also evidence of a troubling deficiency in the sector, namely that the supply chain around CS is weak.

This means we risk failing to take advantage of our own incredible asset, unless the Catapult can achieve its stated aim of forging a mature UK supply chain based on CS devices.

This article first appeared in the May issue of The Manufacturer magazine. To subscribe, please click here

To understand the UK CS sector and where it is today you must study a little known, but quite remarkable company called IQE plc. Based in Cardiff, and now opening a new plant in Newport (where the new Catapult will be co-located), IQE is the global leader in compound semiconductor technology.

It was founded in 1988 by physicists and engineers from the former BT Laboratories at Martlesham, which was developing lasers for fibre optic transmissions. The core of these lasers was a compound semiconductor and Dr Drew Nelson and his team, founders of EPI (later IQE), were the experts in the metal-organic chemical vapour deposition technology that creates compound semiconductors.

(It is one of the enduring ironies, possibly tragedies, of this story that had BT developed CS technology for themselves, instead of losing focus, they could today occupy a world-leading niche in fibre optic technology. Instead, the CS that IQE produce eventually end up inside Chinese-built equipment that today you will find in the back of any BT Openreach van.)

The true launchpad for today’s IQE was the rise of the mobile phone. As mobile (RF) communications became more sophisticated and powerful, silicon chips reached the limits of their utility – they’re not fast enough, power-hungry and as a consequence become too hot. The advent of higher frequency 3G and 4G technologies gave CS the market opening they needed.

They are 100s of times faster than silicon, but consume less power, resulting in longer battery life for consumers.

IQE was ready for the revolution, and after an IPO in 1999 it established a US facility to make gallium arsenide (GaAs) CS wafers for the burgeoning mobile phone industry. IQE’s products are in virtually every smartphone in the world today. In fact, the company’s growth has in many ways shadowed – indeed, fuelled – the development of the digital revolution, and over the years new IQE factories gradually came on stream around the world.

IQE did not lose sight of its original core technology, which is servicing the photonics sector. From their original focus on fibre optic lasers, they started to produce CS for domestic lasers, as in CDs, DVDs, Blu-Ray players, and depilatory laser products. Even your wireless mouse is likely to have an IQE CS in it, namely a VCSEL (vertical-cavity surface-emitting laser).

Today, you will also find these photonics CS in mobile phones screens, using proximity sensors that shut the screen down as you place the phone to your ear, in 3D recognition and, increasingly, LIDAR, which is the infrared 3D sensing technology that will enable autonomous cars to monitor in near-real time, each other and their environment.

It is a heady brew of success stories, which should set the scene for a brilliant national industry producing an array of products based on CS. But, as we know, perhaps with the kind of weary familiarity that the BT story engenders, things don’t always work out the way we’d like them to.

How are compound semiconductors made? 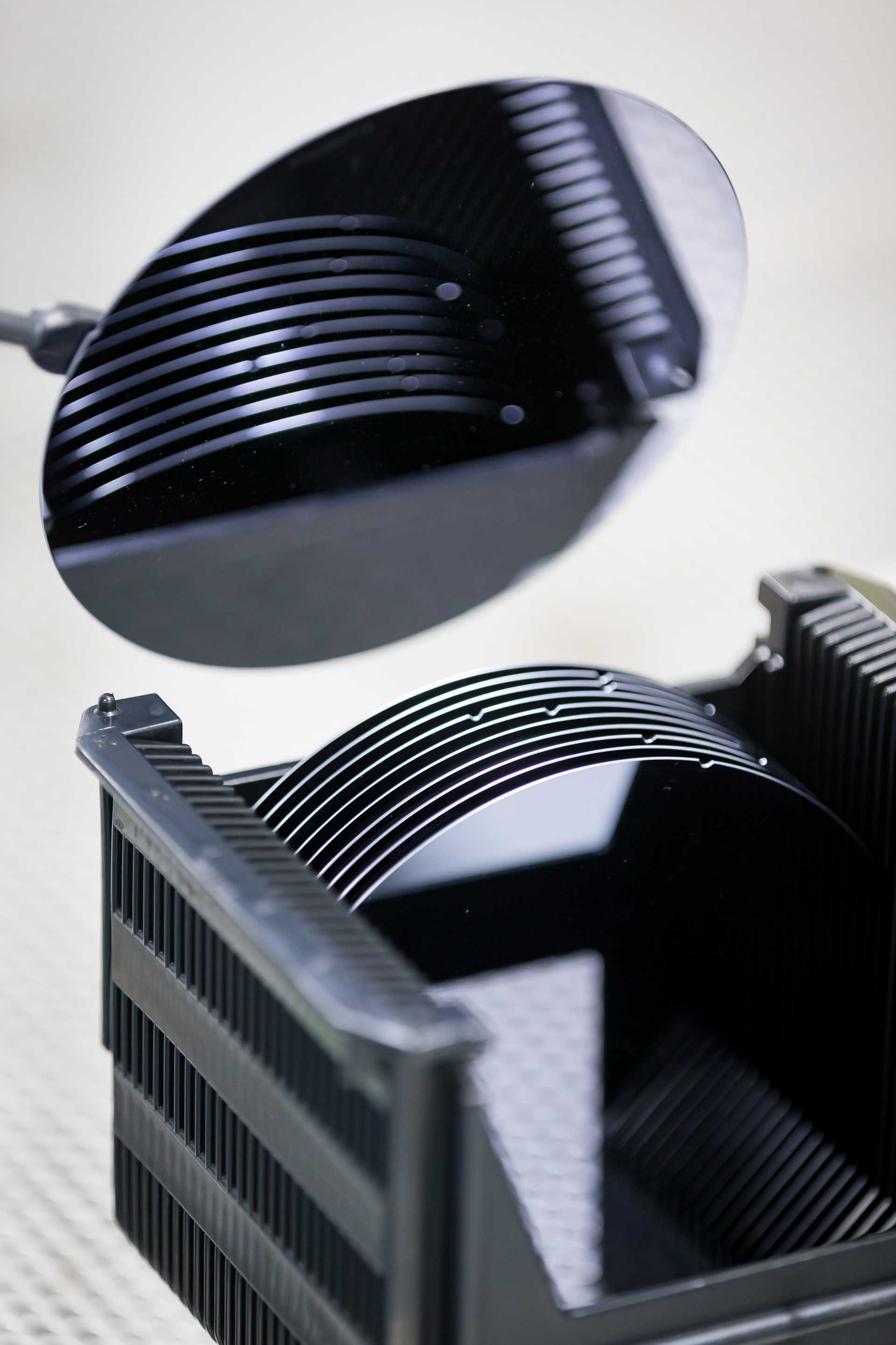 Each wafer is then placed inside a positive atmosphere-plus sealed chamber where the process known as ‘epitaxy’ takes place. This involves laying down on the substrate layers of atomic-level compounds only two to three atoms deep. The number of layers depends on the demands of the chipmaker, but typically it is around 100.

The machines cost £4 – £5m each. IQE has 100 of these in its facilities around the world. The new Newport factory will have 100, just on its own.

The machine that can test the wafers hasn’t yet been produced. It is done by highly skilled technicians, who use a mix of microscopes and lasers to ensure the atom-depth layers have been added to precisely the formula demanded by the customer.

The wafers are very fragile, so IQE’s next stage of development is to develop a way to layer compound semiconductor materials on larger, stronger silicon wafers, offering huge economies of scale. The challenge is in creating an impermeable barrier between the silicon and the CS layers.

As mentioned earlier, IQE produces CS wafers that get made into chips that are then placed in modules that end up in smartphones made in China and elsewhere in Asia, finally to be sold back to us at multiples of the value of the technology that drives them. (In case you are wondering, CS only drive the more advanced RF and sensor technologies in phones. Much of the rest, such as video and audio, is still silicon-based technology.)

Why weren’t we capable of taking advantage of technologies that we lead the world in? A cynic might say it has always been like that – the UK is the natural home of the ‘Valley of Death’, where good ideas die, uncommercialised on home soil.

Ask BT, which today buys back from Chinese companies like Huawei products based on the technology they owned 30 years ago. And the cynic’s mantra of ‘invented in Britain, developed in the US, made in China and sold everywhere’ would, up to a point, be right.

The telephone and television are simply the headlines in a litany of British innovations and inventions that other countries were far more willing to exploit. IQE is determined not to let it happen again. As a whole new wave of technologies that demand CS at their core come on stream, they are pushing for the UK to be tooled up to capitalise on at least part of the value chain that currently resides overseas.

That means making more CS chips, more of the modules powered by those chips and who knows, perhaps the end-consumer products themselves.

This will draw together expertise in other CS research departments in Swansea, Manchester and Sheffield universities.

In 2017, the Cardiff Capital Region (CCR) regional cabinet supported the cluster with a £37.9m investment towards the establishment of a state-of-the-art compound semiconductor foundry.

So far, so good. The difficulty is that in terms of the value chain, that only addresses Technical Readiness Levels 1-3, which are basically R&D and prototyping. Levels 4-6 are where the real payback is, in commercialisation and sales of finished products, and that currently resides overseas.

There is a nascent industry already growing – companies like Newport-based SPTS, which makes some of the equipment that turns IQE’s wafers into chips and IR/ Infineon, which actually makes chips are playing important roles in the CS Cluster. But there needs to be more.

IQE’s communications director Chris Meadows, who has been with the company since 1988, told me, “Silicon Valley in the 1960s was a concentration of all the technologies that launched the digital revolution. We have the potential to do the same in the UK with compound semiconductors, by binding all the component parts of the sector together so we occupy not only the whole vertical supply chain, but also the whole horizontal TRL chain from 1-6.”

Making that happen is the challenge to be addressed by the Compound Semiconductor Applications Catapult. The key is the word ‘applications’ in its title. IQE and its partners in academia and the cluster of companies around it in South Wales are well on their way to occupying TRL 1-3.

Where the UK needs to score heavily is in TRL 4-6, which is perfectly illustrated by the fact that while the UK’s share of the global CS wafer market is more than 50% (depending on which sector, from RF communications to photonics, you focus on), our share of the exponentially more valuable applications market is only 9%.

The signs are positive that IQE’s ambitions can be realised. The government appears to be very much onside, as the CSA Catapult shows, but there are worrying signs that Brexit has begun to hold us back.

The EU created a forum called the Important Projects of Common European Interest (IPCEI). It doesn’t dole out any funds, but it does bring together Europe-wide players, and crucially allows governments to invest in these Important Projects without running foul of state-aid rules.

The IPCEI project on compound semiconductors has attracted bids of €2bn. Germany, France and Italy have each put in bids of hundreds of millions of euros. The UK, the world leader in this technology: just €48m. IQE’s Chris Meadows says that the proper vehicle for meaningful UK government backing could be a national investment bank that uses private financing to fund government-backed bonds, to support further investment in the CS sector.

Whichever way it plays out, there is a huge opportunity for the UK economy in compound semiconductors. It is to be fervently hoped that this time we are able as a nation to make our fortune out of our own ingenuity.