UK industry pays more for its electricity than counterparts in France and Germany for a wide range of reasons.

Delivering more competitive industrial electricity prices will require the UK government to make some important decisions on the future of onshore wind, the structure of the power market and its desired outcome from the Brexit negotiations, argues Nick Molho.

With the recent publications of its Clean Growth Strategy and Industrial Strategy, the UK government set a clear ambition to build a competitive, low-carbon economy.

The Industrial Strategy identified clean growth as one of four ‘Grand Challenges’, and the Clean Growth Strategy sets out 50 actions the government will take to support greater investment in energy-efficient and low-carbon technologies.

However, another important aspect of the UK’s future competitiveness will be the price that its businesses, especially its manufacturing and electro-intensive industries, pay for their electricity.

The price that UK industry pays for its electricity has been a concern for many years and that’s one of the reasons why the Aldersgate Group – an alliance of major businesses, academic and civil society organisations – commissioned University College London (UCL) to do an in-depth study on this issue.

The ensuing report – UK Industrial Electricity Prices: Competitiveness in a Low Carbon World – which came out on 5 February, concluded that UK industry pays more for its electricity on average compared to counterparts in France and Germany, but that the reasons behind this are far more complex than recent media coverage implies.

This article first appeared in the April issue of The Manufacturer magazine. To subscribe, please click here.

Some of the UK’s European neighbours tend to have lower industrial electricity prices because their power grids tend to be better interconnected, they engage in more electricity trading, are more supportive of collective, long-term contracts to reduce prices for heavy industry and have integrated renewable energy on their power grids in a more coordinated – and therefore cheaper – way.

With regards to the latter, countries like Germany have historically put more emphasis than the UK on ensuring that investment in power generation infrastructure was accompanied by investment in the power network.

Importantly, these countries have also long pursued ‘activist’ industrial strategies to support electro-intensive businesses with low-carbon policy costs and the costs of connecting to the network.

For many years now, there have been very detailed distinctions in place in Germany to determine the level of policy and network connection costs which a business should pay, depending on its sector and annual power consumption.

In France, a huge consortium of 27 companies from electro-intensive industries (known as ‘Exeltium’) negotiated a 24-year electricity contract with French power giant EDF, therefore buying down the price of power considerably, in ways that are – or were – incompatible with the UK’s historic approach of promoting competition between industries.

In addition, the very high value of the Pound relative to the Euro in 2015, which coincided with peak contracted gas prices and the increase in the UK carbon floor price, contributed to a spike in UK power prices for heavy industry in 2015 when measured in Euros (see tables opposite).

The gap lessened in 2016 as the exchange rate fell. It is also worth noting that the UK introduced compensation schemes a few years ago to support electro-intensive industries with the policy costs associated with the deployment of renewable energy and carbon pricing, which, for those businesses able to receive them, are more substantial than those in place in our key continental neighbours. 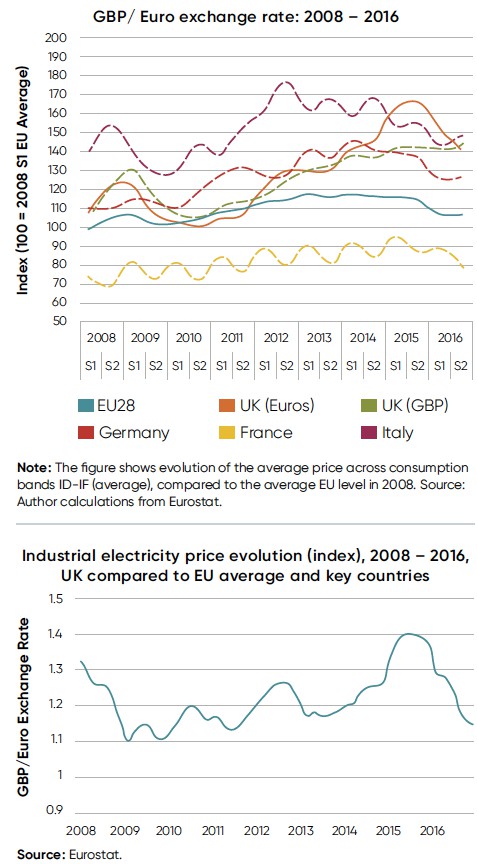 However, for those electro-intensive businesses with only limited or no access to compensation for policy costs, UK industrial electricity prices remained comparatively high.

So, what can be done to provide competitive prices to industry as the UK continues its transition to a low-carbon power system?

The short answer is that given the multiple reasons behind recent price increases, a range of policy solutions are required.

The first is that the government needs to rethink its policy on mature forms of renewable energy like onshore wind.

There is currently no clear route to market for onshore wind in the UK, despite the fact it is a highly cost-competitive and low-carbon technology and one that could deliver electricity at a level below UK wholesale prices.

In the near term, the government could arrange another competitive, subsidy-free auction of mature renewable energy projects (known as ‘Pot 1’ auctions).

Recent research by consultancy Baringa suggested that another 1GW auction of onshore wind projects would clear at a price of around £49/MWh, which would be below the expected market price of electricity in the coming years and would deliver a payback to consumers of around £18m over the lifetime of the projects.

In the longer term, the government could support a new market of zero-carbon and tradeable electricity contracts. This would allow industrial consumers to enter into long-term contracts with renewable energy developers, thereby giving them access to low-cost, unsubsidised clean electricity.

It would also provide them with the flexibility to trade these contracts should their demand for power change over time. Importantly, businesses holding these contracts wouldn’t have to pay the carbon price, currently frozen.

UCL argues the carbon price should increase in the early 2020s as coal generation is phased off the UK grid as a clear market signal that low-carbon power generation is the future.

To help minimise the costs of keeping the power system secure as more renewable energy comes on to the system, UCL also suggest that the costs involved in providing the necessary balancing and backup services to the grid be passed on to renewable energy generators through a ‘green power pool’.

This pool would aggregate all the long-term renewable energy contracts, invest in the necessary services to keep the overall system secure and require renewable energy generators to pay their fair share of these.

It would also reward those business consumers that are able to provide demand flexibility and other services to the grid, by providing them with lower contract prices.

This proposed way forward, which focuses on the security of the power grid at the system level, is likely to be far more cost-effective than the proposal put forward in the recent Helm review on energy costs (commissioned by the UK government), which argues that each renewable energy generator should be required to pay for their own back-up services.

The ultimate outcome of the Brexit negotiations will also be critical. Currently, the UK is part of the EU’s internal energy market, the purpose of which is to encourage a cost-effective sharing of energy resources across borders.

It does this by better aligning the rules in place in different EU member states and encouraging more interconnection links to be built between national power grids, both of which make it easier to trade electricity.

The UK currently has a limited number of interconnection cables linking it with European power grids. However, this is set to change with several projects in the pipeline, which would increase the UK’s ability to trade electricity with its neighbours and reduce the cost of maintaining system security at times of high demand for power.

However, for these projects and benefits to fully materialise, the government will have to ensure that the UK retains an unrestricted access to the EU internal energy market after Brexit, which at this stage is not a given.

While this may not be an option available to all businesses or industrial processes, UCL also recommend that industry should be supported in selling ‘flexibility’ services to the national grid.

These services can include the ability to shift power consumption to a different time in the day where power demand is lower or providing frequency support.

In the upcoming five-year review of the electricity market reform and Capacity Market, the government should look at how UK industry could gain from providing these services to the future UK electricity system.

A range of other measures could reduce industrial power prices. These include better co-ordinating investment in renewable energy and network infrastructure to lower the overall cost of developing the system, supporting electro-intensives with the cost of connecting to the network and ensuring appropriate support with policy costs for those businesses that still need it.

With the latest statistics showing that the UK’s low carbon and renewable energy economy delivered a turnover of £77bn in 2016 (a 3.8% increase on 2015) and with the cost of new technologies such as offshore wind rapidly going down, the government has a strong base from which to deliver its clean growth ambitions.

But to do so successfully, it must also take the bold measures needed to deliver competitive power prices to UK industry. 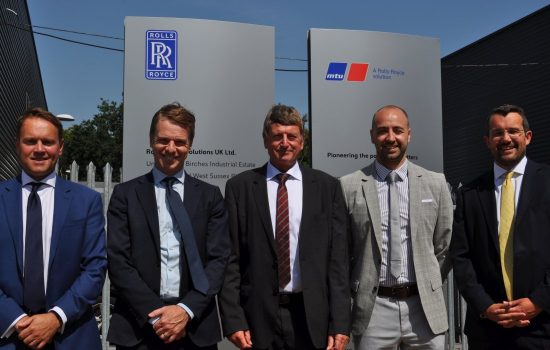