Engendering the future of engineering

Posted on 8 May 2015 by Victoria Fitzgerald

Earlier this year the IET revealed parents as the prime culprits in deterring their daughters from careers in STEM. Victoria Fitzgerald reports.

In 2015 it is difficult to believe that gender stereotyping still exists, and in my role at The Manufacturer, I am constantly informed at events that the times are changing.

However, I fear on closer examination it’s only in the circles I frequent, filled with like-minded individuals, where I hear these stories, when, in fact, beyond these boundaries this sort of discrimination continues to be omnipresent.

Its pervasiveness is evident in a short walk through a UK department store in search of a gender neutral gift for a pregnant friend, where I’m met by a clearly defined demarcation between pink and blue articles. 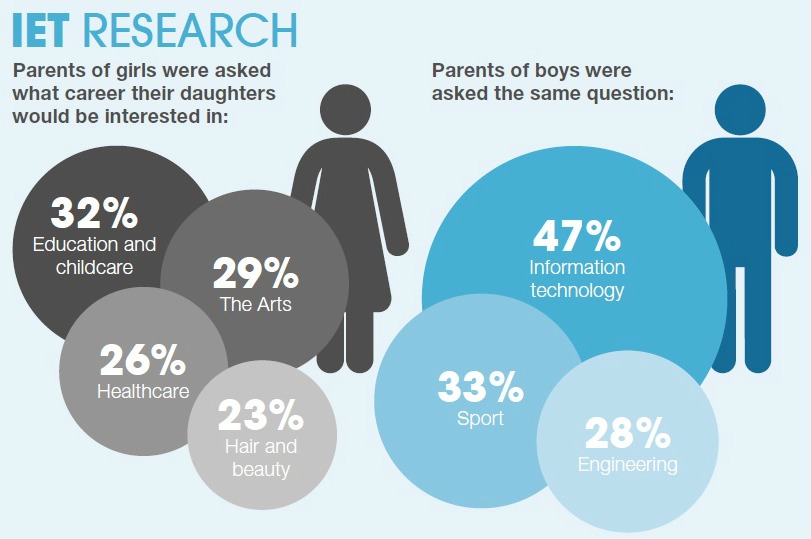 Consequently, I was not surprised to learn that, according to research from the Institution of Engineering and Technology (IET), only 7% of parents would encourage their daughters to pursue a career in engineering.

From the hospital crib to the primary school playground and into adult life where political parties take to the streets in a pink van to garner female votes, our subconscious is permeated with ideals of what girls should do and what boys should do, and for no other reason than that’s how items are marketed.

Writing for The Atlantic in December 2014, Elizabeth Sweet says, “The marketing of toys is more gendered now than even 50 years ago, when gender discrimination was the norm”; and at an event last year, Athene Donald, Professor of Experimental Physics at the University of Cambridge, referred to the most common words used to market boys’ toys as “strength” and “leader” and for girls’ toys as “princess” and “magic”.

Donald commented that she couldn’t remember the last time magic helped her prevail in her research.

EEF’s Women in Manufacturing 2015 report also revealed that although women now account for 23% of all board seats in FTSE 100 manufacturers – up from 19% in 2013 and 21% last year – women continue to be underrepresented at every level, including apprentice and graduate-entry level where the manufacturing sector seeks its future stars.

Unsurprisingly, women comprise only 9% of the manufacturing sector. Similarly, Chloe Agg, senior mechanical engineer at Cundall, was not shocked by the IET results, she told The Manufacturer, “I think it’s disappointing, yes. But I don’t think it’s particularly surprising. As an engineer myself, when I talk to people about what I do or rather when I introduce myself and say ‘hi I am an engineer’ there’s always a surprised look.

“I think people just don’t perceive it, A) a career for women, B) a fun, exciting rewarding career. I think people think it’s all about grease and cars.”

But Agg doesn’t believe there will be a rapid progression, she explains, “I don’t think we’ll do anything quickly. “It takes people a long time to change opinions but I think you can already see some of that in the new engineering academies.

“I’m working on the design of one at the moment, which has given me the opportunity to look at an existing example and it’s good to see there’s a much higher proportion of girls in those than there are in industry itself.

“I think that change is already starting but the IET campaign will really help with that.”

On the bright side, industry leaders are and have been showcasing the issue and backing initiatives left, right and centre for some time. However, there comes a point when we need to stop talking and start doing.

IET’s Engineer a Better World has seen the organisation join with a number of industry stakeholders to develop the campaign, which looks to inspire the next generation of engineers and technicians by encouraging young people and their parents to nurture their curiosity and think differently about careers in engineering. The campaign will also showcase female role models who have creative and rewarding careers.

As part of the project, IET gave parents and children some information on the exciting careers available in the engineering sector. Before being more informed, fewer than half of those parents with daughters would have encouraged them to pursue engineering.

Having seen the information, this figure rose from 45% up to 67% – an increase of almost 50%. The figure also rose substantially among girls themselves rising from 32% up to 61%.

Susan Scurlock, chief executive and founder of Primary Engineer, believes that we need to stop getting hung up on gender stereotyping and let budding female engineers be themselves, “We get really caught up in these massive questions that when you drill down into them, aren’t really meaningful.

Primary Engineer is a non-profit organisation that aims to encourage young people to consider careers in STEM-related professions. It offers primary schools a way to deliver practical mathematics and science to design technology activities, including teacher training interactive and paper-based resources, and regional and national competitions.

All projects are linked to practicing engineers to provide a real-world context to the project. This year the organisation is working with nursery schools. Scurlock explains, “We launched this year, early learning engineer for nursery schools and reception teachers.

“We did that on the premise that there’s actually a demand for it, the teachers that have used it found it absolutely extraordinary. Engineering in nursery schools is the next step I think.

Scurlock makes an excellent point, we need to stop agonising over issues that detract from the point. Stereotypes always have existed and always will. By just ignoring them and instead turning our attention to promoting the rewarding, exciting and well-paid jobs that exist for both young men and women in manufacturing, will in itself alter perceptions.

Young people cannot be inspired by what they cannot see. We have a responsibility as parents, teachers, influencers and individuals in manufacturing and engineering to promote the successes of industry from a young age at home, in school and in the public domain to make a sustainable change and fill the talent pool with gifted young people of both sexes.