ERP: the importance of choosing wisely

Anyone in the market for an ERP system needs to get to grips with every last detail of functionality before placing their order, warns Malcolm Wheatley. Mistakes can be costly.

Gloucestershire-based Fluid Transfer International designs and manufactures aviation and naval refuelling equipment such as fuel trucks, which they sell to defence ministries and airports worldwide.

Each order is bespoke, finance director Richard Iles Caine told me. It starts with a vehicle chassis, onto which the company then adds the required components and sub-assemblies. 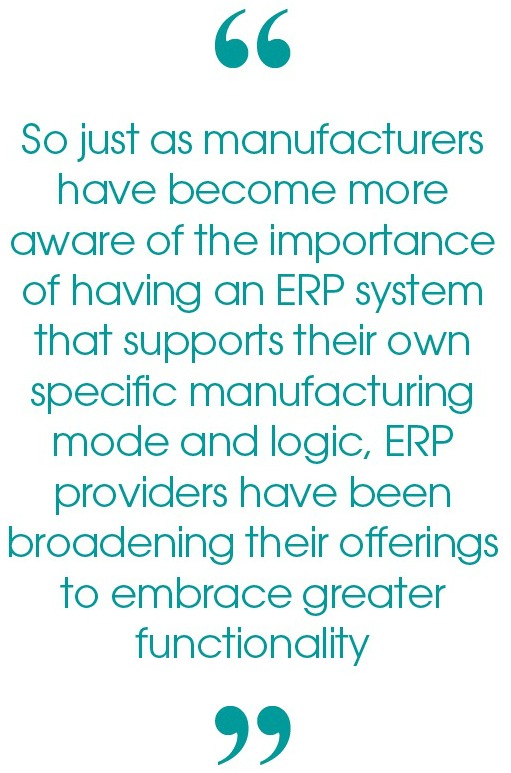 “A refuelling truck, one of our core products, typically comprises more than 1,000 items—but only 50 or so cost more than £100,” he explained. “We aim to use just in time principles to keep inventory investment to a minimum but at the same time any delays in production can have huge implications.”

“Without a configurator, manufacturers such as Fluid Transfer would have to maintain literally thousands of bills-of-material, each describing essentially the same product,” explained Datawright general manager Andy Gough.

“Configurators are often sold as an ‘extra’, or have to be bought from a third-party, but for us it’s part of the basic product, and reduces a lot of bill-of-material complexity for our customers.”

It’s a story that cuts right to the heart of one of the biggest possible mistakes when buying a new ERP system: the argument that deep down, ERP systems are all essentially the same – and that choices should therefore be based on factors such as brand, cost, and other non-manufacturing issues.

This unique event offers a one of a kind opportunity for you, and your team, to see the premier enterprise software solutions, in one place at the same time.

Don’t miss your chance to meet with solution providers and reduce six months of research into six hours.

Don’t throw your hands up at all this jargon. It’s important to understand it because getting it wrong is an expensive mistake to make.

Bill-of-material disassembly, for instance, is a manufacturing model common in food manufacturing, where manufacturers start with (say) a chicken or side of beef, and then manufacture multiple products from it.

Process manufacturing? It’s the same story: try running a chemical plant with an ERP system geared for washing machine assembly, and you’ll soon be looking for a replacement system—or be out of business.

“Manufacturers are definitely more clued-in about the importance of this than they used to be, and probably because more companies now have people within their ranks with prior ERP implementation and operating experience, prompting them to think about these issues,” said Gavin Davidson, manufacturing industry lead at ERP provider NetSuite.

“A few years back, it would have just been the senior finance people with ERP experience—now, it’s more pervasive.”

Even so, it can be easy to make a mistake, convinced by glib ERP providers that a piece of functionality doesn’t matter, or is really the same as something else, when it isn’t.

“Companies can easily receive the impression that bill-of-material functionality is the same as an ERP recipe or formula, but I would dispute that way of thinking,” said Justin Herbert, commercial manager at Microsoft Dynamics ERP specialist Prodware UK. 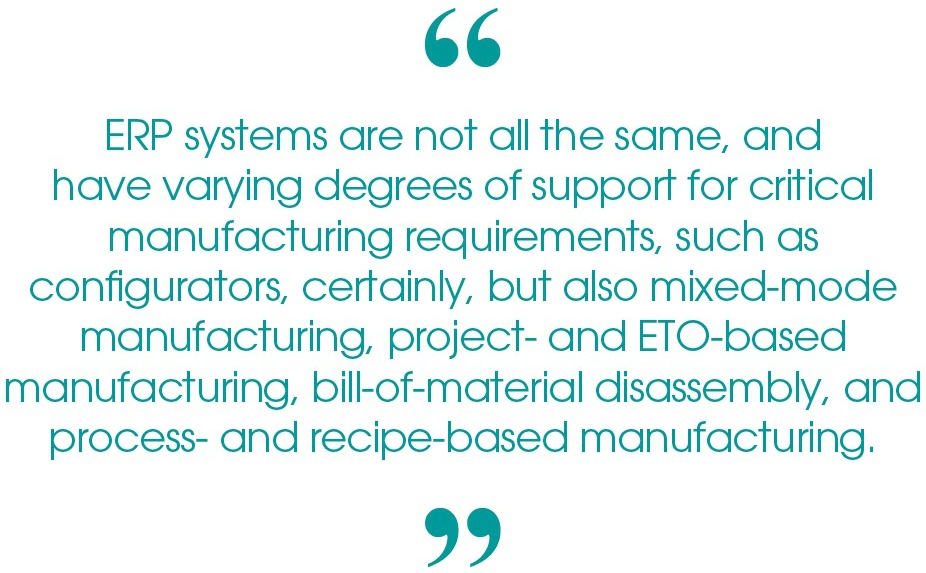 “While they serve a similar purpose, they’re not the same, nor are they interchangeable: a bill-of-material does not normally require the additional and extended attributes that can be associated with each batch.”

That said, points out Jonathan Orme, sales and marketing manager at ERP specialist Exel Computer Systems, it’s important to keep a sense of proportion, and not be too over-prescriptive when looking at ERP systems’ support for alternative manufacturing models.

“Take a yoghurt manufacturer and a business making carbon-fibre parts for aircraft,” he argued. “Yes, they’re making very different products for very different markets, but at the end of the day, the production process involves bringing raw materials in through the door, doing something to them, and then shipping products out of the door again.”

So just as manufacturers have become more aware of the importance of having an ERP system that supports their own specific manufacturing mode and logic, ERP providers have been broadening their offerings to embrace greater functionality.