Posted on 6 Oct 2015 by The Manufacturer

If George Osborne is serious about achieving £1tn of exports by 2020 he needs to add rocket boosters to the Government’s current efforts, Terry Scuoler weighs in.

In fact, he will have to do something special just to ensure the UK maintains its current share of world trade, which in terms of goods has halved over the past two decades to just 2.5%.

Our pride as a trading nation is rightly based on a history of sailing the seven seas and selling our goods around the world.

The new global digital reality means there is an expectation that the goods we produce are not only technologically advanced, but more often than not customised to meet each buyer’s requirements and accompanied by sophisticated service support and back up – anywhere on the globe.

Almost all (94%) of manufacturers surveyed in EEF’s innovation monitor stated that they engaged in innovation in the past three years, consistent with long-term survey trends.

It is this kind of innovation which will help manufacturers export more, with 52% saying that they were investing in innovation in order to move into new markets, while 47% said they were innovating to develop existing export markets.

Manufacturers are responsible for 44% of all UK exports according to the Government’s own figures. So every arm of Government – local and central – must be firmly coordinated in support of our drive for increased trade.

The Prime Minister, Chancellor and trade minister, Lord Maude, have all personally demonstrated their commitment to helping UK plc on trade missions around the world.

In the autumn the Chancellor will take exporters to China and once again seek to sell more goods and services to this vast, complex and still expanding market.

Whether it is through excellent professional services, such as those provided by UKTI, the network of embassies around the world, or funding for research such as the pioneering innovation centres – the catapults – which bring industry and academia together in the drive for greater technical excellence, Government has a key role to play. 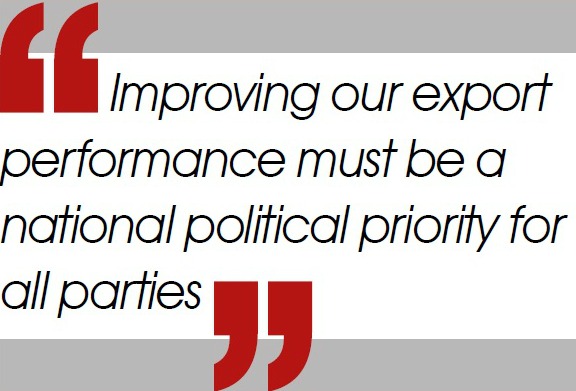 They are more productive than the economy as a whole, and considerably more export intensive with forecasts suggesting they can contribute 40% of the UK’s productivity gains over the next decade.

The export intensity of the sector means however that UK manufacturers are more exposed than most to international competition, which requires them to be ever more productive and innovative.

UK manufacturers are investing in new technology, skills and innovation to compete both at home and on a global stage, all of which is borne out in EEF’s latest research.

Moving into new markets however is challenging. It requires a huge amount of effort, time and resource.

Developing new relationships with new customers can take years. Once relationships are cemented however, they can be long lasting and commercially rewarding.

Sustainability is key and success can only come on the back of ever rising investment and commitment.

If manufacturers are to have self-belief they need also to have belief in our political leaders and the ongoing support which they and our nation deserves.

Let us be clear the £1tn target is an enormous challenge, but let us do our very best to achieve it.