Exports: what are UK manufacturers experiencing?

Posted on 9 Nov 2016 by Victoria Fitzgerald

The Manufacturer examines British manufacturers’ attitudes to exports post-Brexit and looks at how to navigate the age-old barriers of finance, culture and legislation.

Since June 24 this year, headlines have been saturated with the uncertainty of a post-Brexit Britain, particularly where exports are concerned.

Just before the referendum, EEF reported that 70% of its members felt it was important to remain in the EU. The organisation’s CEO, Terry Scuoler, stressed that although members favoured staying put “there were no rose-tinted spectacles”, manufacturers were fully aware of the pros and cons of EU membership, but on balance, decided that the UK’s interests were better served in remaining.

But in June we found ourselves closer to moving out of the European Union and keen to formulate a plan to ensure the UK can continue to grow and export separately from the EU. It is encouraging to see that Britain’s future EU exit hasn’t fazed many manufacturer’s ambition to continue to export and enter new markets.

The Manufacturer and Santander asked manufacturers whether their attitudes to exports were different after the referendum, and a resounding 60% said their position remained the same.

Jonathan Lane, sales director for Arrow Solutions, a UK manufacturer of professional cleaning and maintenance products, told TM, “Our plans remain entirely unchanged and, naturally, we have had some benefits from the weakening of the pound through improved export performance.”

Similarly, Mark Venables, managing director of Alloy Wire, a specialist manufacturer of round, shaped profile, wire rope and electrical resistance wire, has even seen a boost in exports since June.

He noted, “We have seen an increase in export orders since Brexit, with the reduction in the pound against the Euro and Dollar helping us become more competitive. However, on the flip side, the nickel based alloys we import from Europe and the US have become more expensive, so it evens itself out.”

John Carroll, head of product management and international business at Santander Corporate and Commercial, commended the resiliency within the sector.

He commented, “Many of those in business today having come through the recessions of the 1980s and 1990s, not to mention the 2008 financial crisis. As a consequence, they have a mind-set of focusing on the task at hand while planning accordingly.” 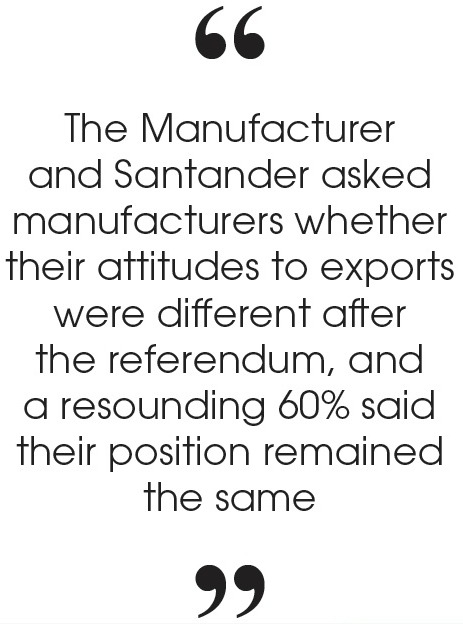 It’s excellent news to hear that manufacturers are robust in the face of uncertainty. And although the survey showed an unchanging attitude to exports, it highlighted some concerns that still present an obstacle for businesses.

Half of respondents cited a “lack of legal and/or regulatory knowledge” and 100% of those surveyed said a “lack of local contacts in target markets” was a barrier to exporting. Arrow’s Lane told TM that having “local employees” and “regular overseas travel” in the desired export area were critical to a firm’s success.

“Our solution for our biggest overseas markets is to have local employees that can guide us through both the very obvious barriers (legal compliance for example) and the more nuanced considerations, such as how to make a presentation or host a dinner,” he explained.

“The key people are our local managers, who have a strong understanding of both UK and local business culture and are able to act as a buffer, spotting any concerns before they become issues.”

“Even with the presence of a local team, regular travel overseas is essential. It’s not possible to interact in the same way or experience local conditions for yourself while sitting in your office thousands of miles away and conducting business over e-mail and video calls,” he added.

Venables had a similar approach for Alloy Wire’s export strategy, but also said there was much to be gained from exhibiting overseas, “We exhibit at six exhibitions around the world, from Chicago to Houston to Dusseldorf to Bangkok and, in the future, we will be showcasing Alloy Wire products and services in Shanghai.”

Carroll emphasised the benefits of trade missions in fostering successful exports, “One of the best things we do and the most rewarding, is to take businesses on trade missions. We have taken many UK manufacturing businesses into far afield markets and even in such a complex market as Brazil we have directly helped secure significant contacts through our local connections in market. Our global financial solutions have helped turbo boost sales and overall profit performance of traditionally UK or Western Europe manufacturing trading businesses.

“Cultural, legal and legislative issues are often resolved if you truly understand the market by having deep presence and support networks to help either through your own local understanding or with alliance partners who can also assist,” he added.

As well as the cultural aspect, it’s important not to underestimate the legal barriers. Terry Scuoler explained that, when negotiating, the rule of law is absolutely critical. “I have traded as a managing director of a large organisation, and when you get into difficulty with the process of arbitration, I have to say quite frankly, sometimes they may not be sympathetic to you as a British exporter. So the rule of law is important and in some markets around the world it can be, on occasions, pretty prejudicial to an exporter.”

Lane supported this and pointed out that “legal restrictions around exports have become tighter in recent years”, he referred to new documentation requirements, for example SASO standards in Saudi Arabia and regulations in the movement and storage of hazardous chemicals following the 2015 Tianjin warehouse explosion in China.

“We have put in place robust procedures to ensure SASO requirements are met in full for every shipment. For China, we have spent time finding the right logistics partners that can handle and store those Arrow products that are hazardous,” explained Lane.

So how do manufacturers want to be supported in navigating these barriers? Lane urged for a “government that fully appreciates that expanding manufacturing as a whole, is a long-term process and a long-term plan is required”. He also highlighted the value in developing the domestic supply chain and manufacturing ‘ecosystem’, as well as more clarity on trading restrictions from the financial sector.

“One suggestion I particularly like, came out of a recent report into export by the Legatum Institute, which was to hold automatic cross-sector trade missions when a UK multinational company has just signed a major overseas deal,” he concluded.

Where next for exports?

“We are very keen to support manufacturers as much as we can and to provide them with the lending that they require. In order to position the business in the best possible light the proposals that are put forward must consist of a coherent story outlining the history and evolution of the business along with a clear explanation of future plans.

“In addition, there are several key elements that should be incorporated to give the best possible chance to secure funding. These include details on the people, the product, the strategy and key metrics. The more complete the picture the greater the likelihood that we can help them progress the next stage of their business.

Find out more about supporting your exports journey at: en.santandertrade.com