Posted on 3 Jan 2020 by The Manufacturer

The “seismic” shift from fixed automation to mobile robots will transform material handling within the industrial supply chain, as well as other areas of manufacturing – according to new research by a global tech market advisory firm.

By 2022, the rapidly growing autonomous mobile robots (AMR) space will start to overtake the traditional industrial robotics market, and of the 8 million robots forecast to be shipped in 2030, nearly 6 million will be mobile, according to ABI Research.

Currently, mobile autonomy is concentrated in material handling within the supply chain, but mobile robots are set to touch every sector of the global economy for a wide range of use-cases.

The “enormous” projected growth is expected to permeate all subsectors of industry and generate an estimated total market valuation of approximately US$277bn (£211bn), as mobile robots grow to “touch every sector of the global economy for a wide range of use-cases”.

Mobile autonomy is currently concentrated in internal logistics within the manufacturing supply chain where further developments are predicted to happen before mobile robots become commonplace in other areas of industry, according to the ABI Research Commercial and Industrial Robotics market data report.

AGV vs AMR – What’s the Difference?

Automated material handling is a challenge for large and small companies alike. By automating logistical processes, businesses can liberate their human workforce to focus on more complex, high-value tasks.

Automated guided vehicles, or AGVs, have been the traditional (and largely only) option for internal logistics and are generally a fixed, heavy installation used in repetitive delivery processes.

Autonomous mobile robots, or AMRs, are the more flexible, cost-effective technology that can perform sophisticated tasks without manual operation or observation.

AMRs also do not require external infrastructure to localise themselves and are built with sensors and cameras to self-navigate their environments.

“Many new verticals, like hospitality, delivery, and infrastructure, will demand systems that do not require external physical infrastructure to move about,” said Whitton.

“While AGVs will thrive in intralogistics for fulfilment, especially in greenfield warehouses, AMRs solve the challenges faced by many end-users by offering incremental automation that does not require a complete change of environmental infrastructure.”

AGV technology currently represents the majority of mobile robot shipments, but this will change, according to ABI Research.

While there will be 2.5 million AGVs shipped in 2030, AMRs will reach 2.9 million in the same year, it said. A takeover attributed to declining costs of superior navigation systems and the desire for greater flexibility into robotic fleets.

The Amazon Use Case

Amazon Robotics has driven growth in mobile robotics for the past seven years since its acquisition of Kiva Systems, with an estimated 256,000 automated guided vehicles deployed to date.

Amazon currently holds nearly half of the internal logistics robot market share and is constantly broadening its portfolio of robot subtypes with autonomous mobile robots for transport and delivery.

French manufacturer Balyo (who partnered with Amazon) is presently leading the way in mobile robotics, whereas Seegrid (800 units sold) along with several smaller actors are just beginning to scale up their operations

It estimates that half of all global shipments for forklifts (almost 1 million) could be automated by 2030.

Other areas for mobile automation will be maintenance and cleaning, according to ABI, with more esoteric technologies likes quadrupeds (exemplified by vendors like Boston Dynamics) deployed for data collection purposes, particularly for real estate, construction, and industrial inspection.

ABI Research also predicts that quadrupeds will increase to 29,000 yearly shipments by 2030.

“As mature sectors of the robotics industry achieve growth more in line with established technology markets, mobile robotics are set to create lasting transformative effects across the supply chain and will become increasingly ubiquitous throughout the global economy,” said Whitton. 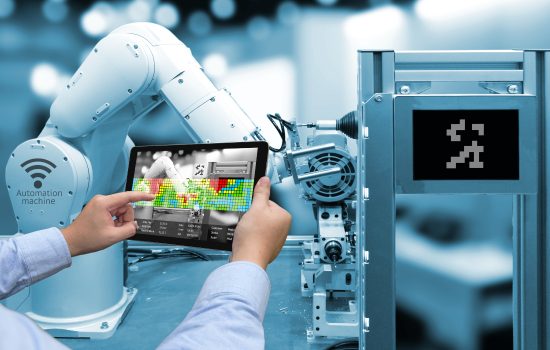