When the Bloodhound land speed project collapsed back in 2018 due to lack of funding, there were many among the manufacturing community who bemoaned the seemingly inevitable fact that without emergency capital the fate of the iconic multimillion-pound supersonic car would be the scrapyard.

None were more determined to haul the near 10-year project back from the jaws of defeat than Yorkshire businessman, Ian Warhurst, who used his own money to revive the Bloodhound mission of breaking the world land speed record of 763mph and to ensure the brand retained its place in engineering history. 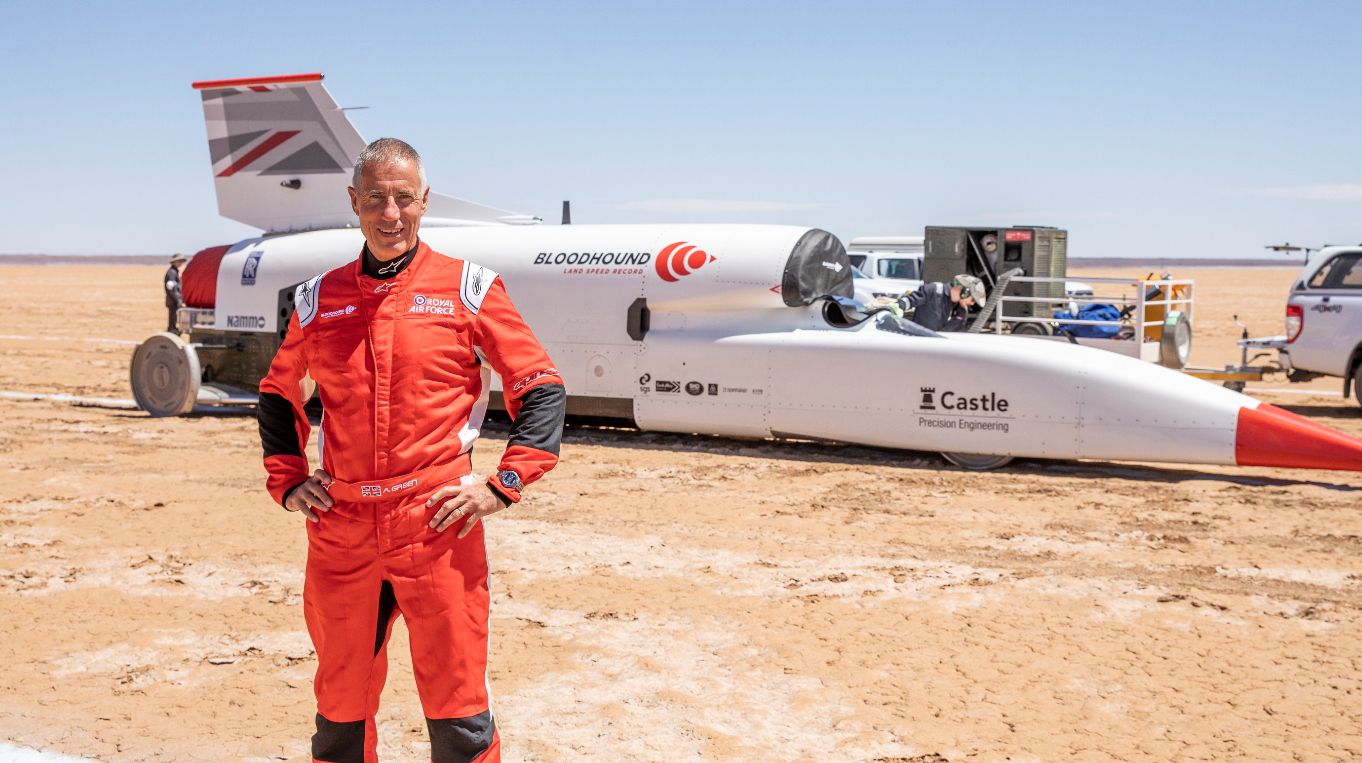 Then, in 2019, Bloodhound pilot and RAF Wing Commander Andy Green took the supersonic car to 628mph in a straight-line at South Africa’s Hakskeen Pan – the preferred test site for the Bloodhound team – up from 501mph in early November.

This after overcoming some initial car handling challenges that included crosswinds above 10mph, and making the brake chutes fly steadily behind the car, rather than oscillating from side to side during the brake phase. “Before we get carried away about how easy this sport of straight-line racing is, we did have to work quite hard in November to get this amazing result,” said Green.

It’s no secret that Warhurst has been especially careful not to reveal the precise figure he personally invested to restart the project in 2018, but he has said that in order to move things forward, Bloodhound will need between £5m-£10m if it is to have any chance of setting a new world land speed record.

The endeavour was previously led by project director Richard Noble, and bankrolled by Zhejiang Geely Holding Group (ZGH), the largest privately-owned Chinese auto group, which signed a three-year sponsorship deal with Bloodhound in 2016. 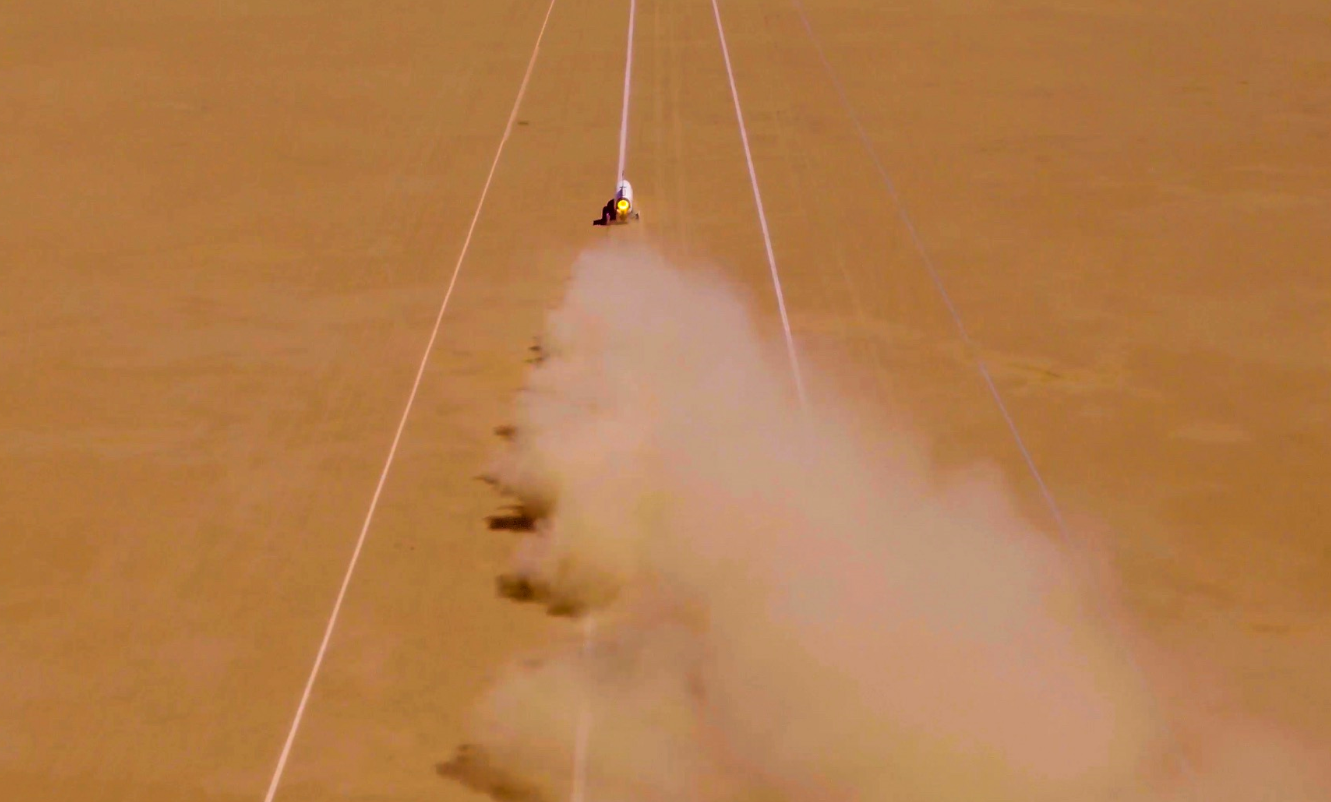 Now, under new ownership and with some revisions to the original objective of 1,000mph, the Bloodhound SSC is back in the test phase and gearing up for big things in 2020 and beyond – provided the project’s new owner can secure additional support from other like-minded investors keen to hitch their wagon to the Bloodhound shooting star.

Speaking exclusively to The Manufacturer, British entrepreneur Ian Warhurst discusses a newly formulated education programme for encouraging greater STEM awareness, managing his expectations about what Bloodhound can reasonably achieve with the ‘pot of money’ he has set aside, a timeline for completion and the role of British manufacturing in beating the world land speed record.

What compelled you to take over the Bloodhound project, to see it through, and what are the larger implications for UK manufacturing and innovation?

Ian Warhurst: I turned up at the old office in Bristol to have a look at the car once I’d spoken with the administrators to find out what I was supposed to be buying.

I remember thinking it wasn’t right for something that had taken 10 years of work to be cut in half with an angle grinder, gutted for its control equipment and weighed in for scrap. I left the building without initially doing a deal, but I had this feeling like I was kind of the last person left, that I might be the one who let it be cut up, and I didn’t want to live with that. 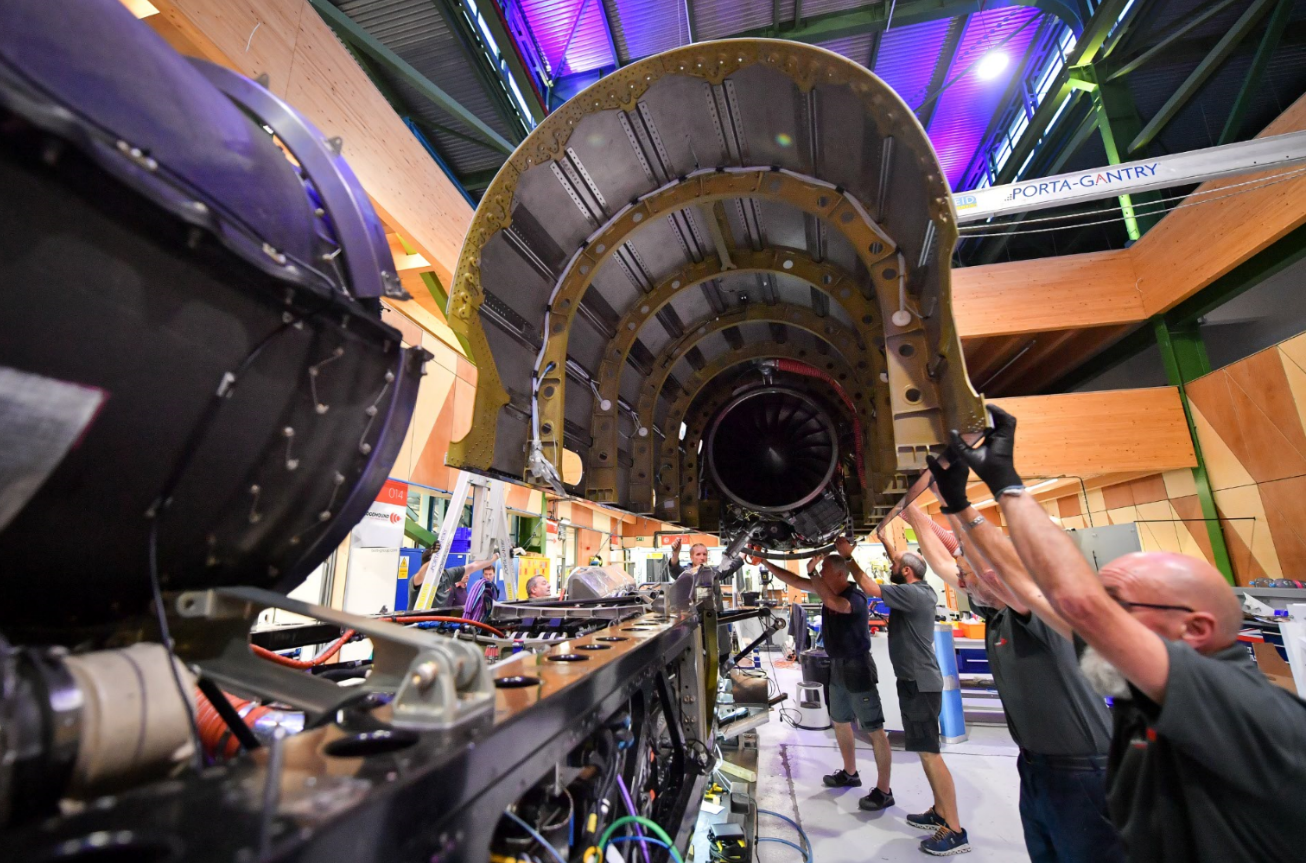 How is the Bloodhound Education Programme, formerly Bloodhound Blast, different and is STEM engagement as important to you as breaking the world land speed record?

The Education Programme is actually about going into schools, educating the kids and giving them lessons like rocket car challenges and getting them excited about STEM.

If anything, I would say the world land speed record is important to achieve because that’s the whole point of what we’re doing. But it’s the journey that’s the really exciting bit. The excitement of doing the testing, solving problems of running in the desert, working out how to develop a design and fit the rocket to achieve the next speed level.

So yes, that all feeds into STEM and it’s very much what the project’s about.

You’ve rolled back the 1,000mph target and now aim to exceed the current world land speed record of 763mph. Can you tell us why and plot some milestones for us?

1,000mph was an aspiration of the previous project, and I’ve basically put that in the cupboard for now.

Breaking the land speed record is, in itself, a massive achievement and a very difficult thing to do. I’ve said let’s look at speeds north of 800mph for phase one, then work out what we do about 1,000mph – if we should carry on, if it’s safe to do so, and if there’s someone to sponsor it.

Timing-wise, it’s going to be a few months before we get any contracts signed. That’s normal in sponsorship. I’m hoping that by the end of the first quarter in 2020 we’ll be in a position where we can announce we are proceeding with the next bit of the project.

We’ll probably be about 12 months in developing the design of the rocket and fitting it, before heading back to South Africa, maybe by mid-2021 – but that depends upon a few more things yet. So, I don’t exactly know when, but around 12 to 18 months is when we’re looking to go back out there again. 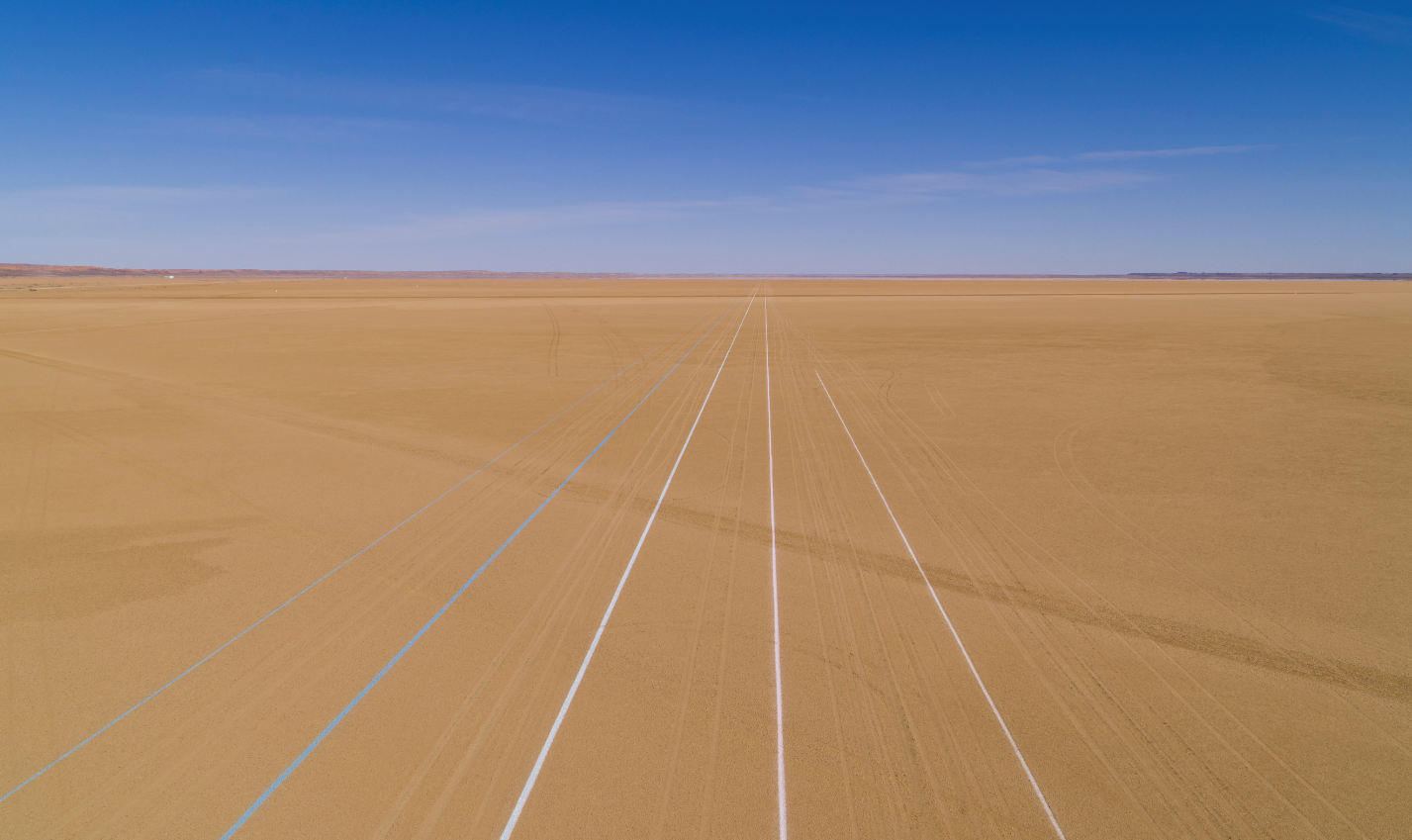 There were numerous reasons why the original project fell through and couldn’t continue. What’s the contingency plan if the same hurdles arise again?

My plan is that we won’t restart the next phase of the project until we have enough money in the pot to do that – and then we have to make sure the project is run very tightly because we can’t go over budget.

So, very simply, the plan is to get enough money in the pot and then spend it doing the project and make sure we achieve the world land speed record.

I set a budget, a very clear budget for the last nine months’ work, and the team actually came in under budget, so that was really great. We know we can do it; the team can do it, and so that’s the plan.

The decision to transition away from the familiar blue and orange to a white shell – is that part of the whole sponsorship campaign, or is it to appeal to a new generation with the ‘spaceship’ angle?

The main reason was more out of respect for the build project. In the same way that Formula 1 teams change livery and sponsors every year, that’s what we were doing. The first phase of the project was the build prep phase and I wanted people to understand that it wasn’t just the blue and orange car trying to carry on.

The image of the blue and orange car with all those sponsors remains enshrined in history and should remain so, and the car going forward from here is a different part of the project.

The white is simply to show that the car is a blank canvas and we are still looking for naming sponsors, title sponsors. If somebody comes along and wants to paint it pink and pay all the money, then we’ll paint it pink. I don’t mind what colour it is, I just want the car to break the world land speed record! 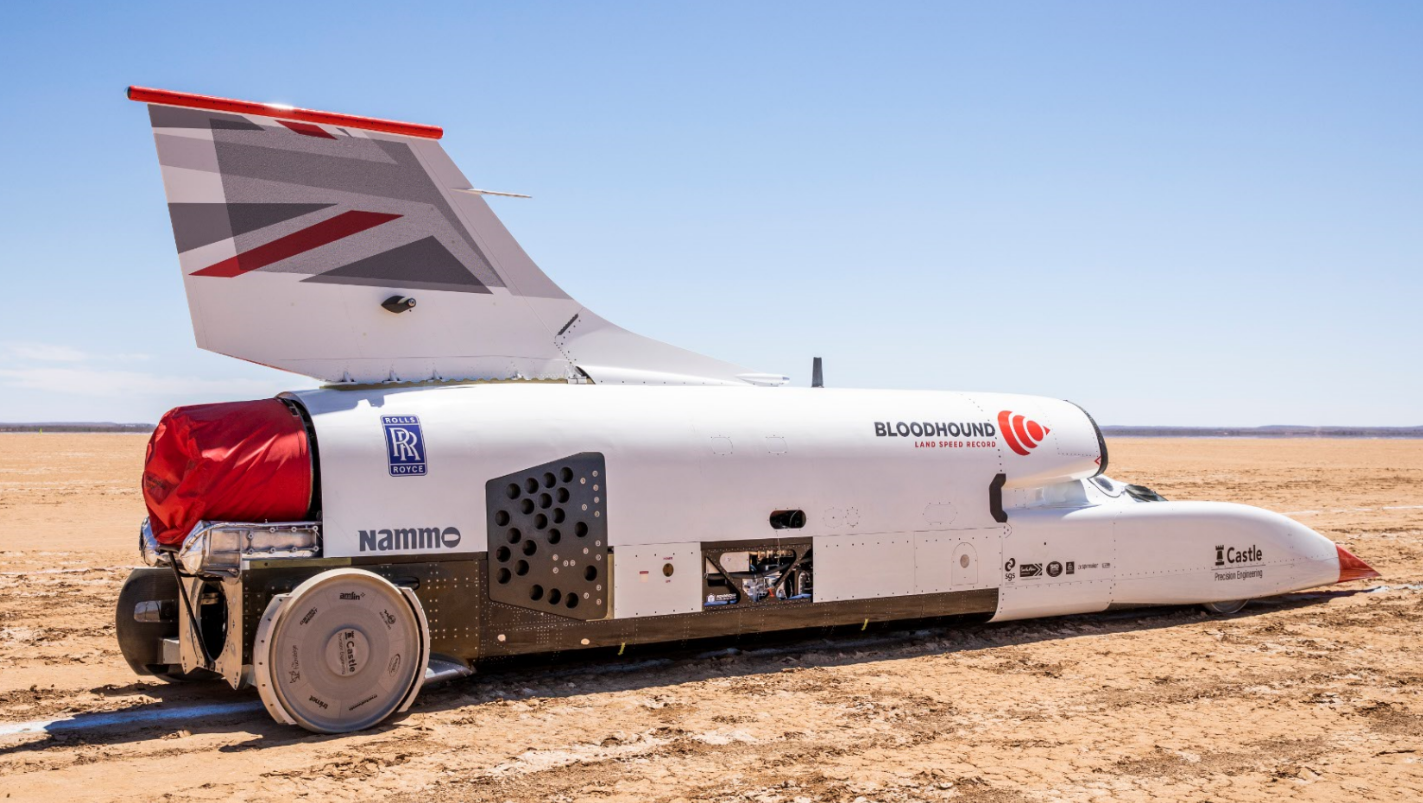 How do you square the circle of wanting Bloodhound to be a showcase of British engineering when so many components have been sourced elsewhere?

The rocket was made by Nammo, the international aerospace and defence company in Norway. Very few things are 100% made here, lots of things are made elsewhere. So, I guess I see it as a global project from a supply chain point of view.

But the actual manufacturing and engineering of the car is British, as are the people doing the project and actually making it run. So that’s how I guess I square it in my mind.

What’s been the most challenging aspect of the Bloodhound project for you and the team?

The project is inherently risky and dangerous, because we’re trying to go to places people haven’t before. We’re breaking the sound barrier with a car and four wheels on the ground. So, it’s also about human endeavour.

Then there’s all the different engineering involved, including electronic software control programming, the mechanical side, the jet engine, the rockets. I like to think of it as pure engineering: it’s got almost everything in one vehicle, which has been exciting. That’s what I love about it.

The other exciting aspect is the programming side of the software – control of the EJ200s, the military jet engines, which are obviously designed to fly. The engineers have to do all sorts of clever things with the software to fool the engine into thinking it’s OK to actually run. Because everything on the engine will be telling it to stop straight away because it’s too low, it’s going too fast, the air’s too dense.

I desperately want to get to this next phase because I want to buy a rocket and run it and obviously the team do as well. Incidentally, the great thing about the rocket is it’s environmentally a really superb product because all it does is take in H2O2 (hydrogen peroxide) and decomposes that down into steam and oxygen. 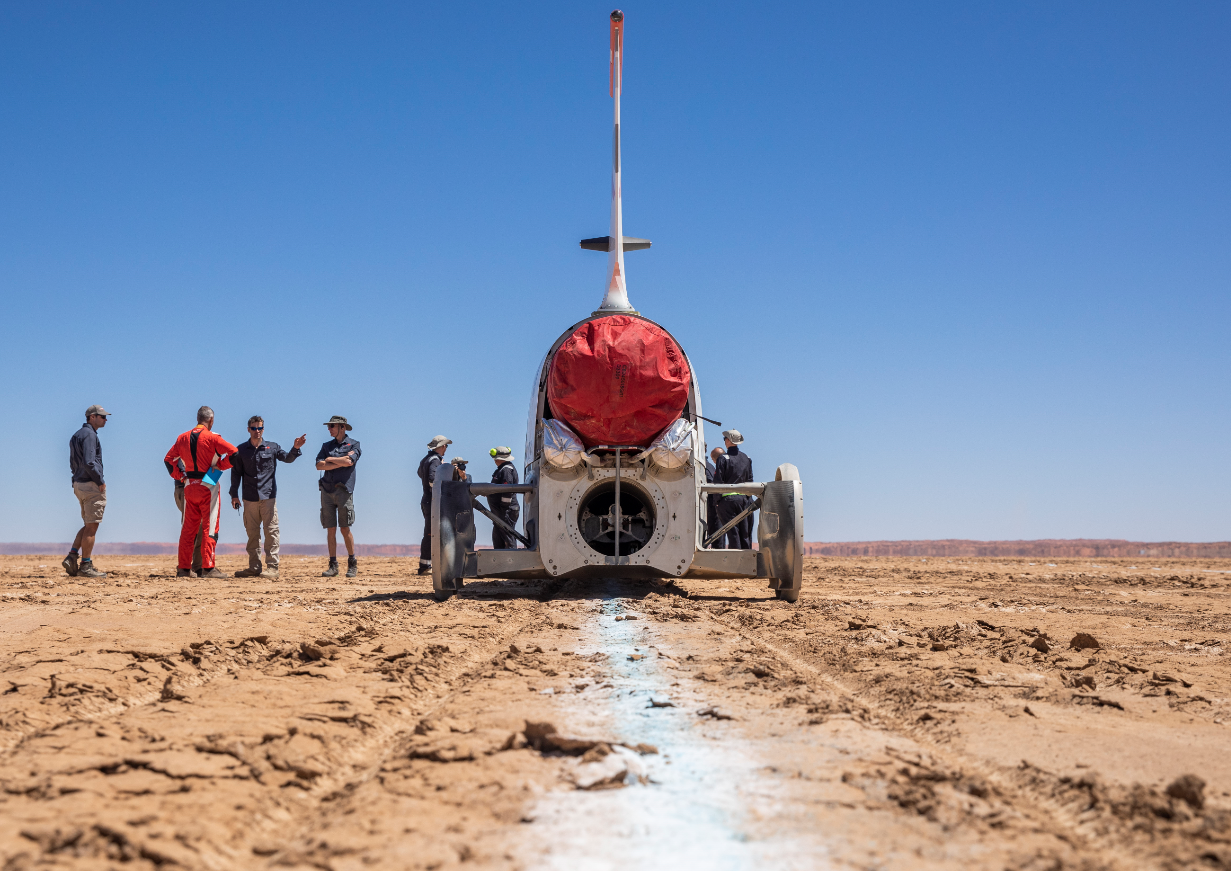 What was your feeling when you saw the car run?

When I saw the car running at speed for the first time, I was at what we call a ‘maximum speed point’ on the track, and the car came past me at about 300mph and my reaction was, ‘Wow, that’s really fast’.

Until you see it going, you don’t appreciate how fast it actually is. And obviously as it runs, it goes faster and faster, and it even made the early runs look ‘slow’. It’s a mixture of pride for the team and just excitement for the project. It’s a really great thing to be involved in – superb.

What needed to be manufactured between buying the project and getting the car running?

When we launched the project in March, we were aiming to reach the desert in October. So, we had a really short window to make parts for the car.

There were quite a few components that needed making – composite components, machined components – and while we’ve got a machine shop in-house, the main components were made for us by the National Composites Centre.

They made the airbrake doors, and a few other companies were making other composite parts. Everyone pulled together really well in a short space of time and it was great to be able to draw on UK manufacturing to achieve that. 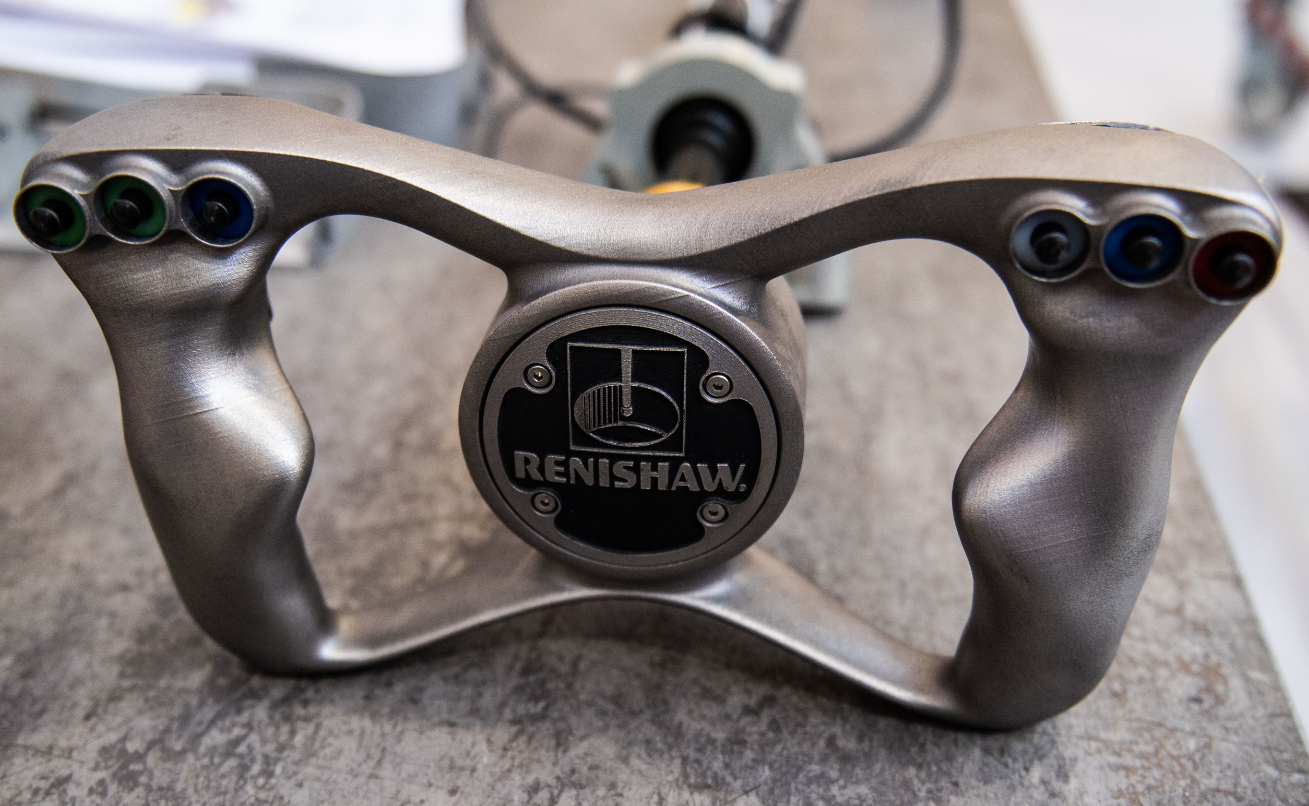 We’ve been keeping up with the Bloodhound SSC…just about