Will Stirling reviews some next-gen technology being developed for Industry 4.0 on display at the world’s biggest industrial technology show, Hannover Messe 2014.

The future of manufacturing or synchronised, grand scale marketing campaign? If you are unsure about the importance or relevance of Industry 4.0, the line-up of German companies aligning their products and services to the movement at Hannover Messe this year should convince you ‘Integrated Industry’ is real and it’s coming. 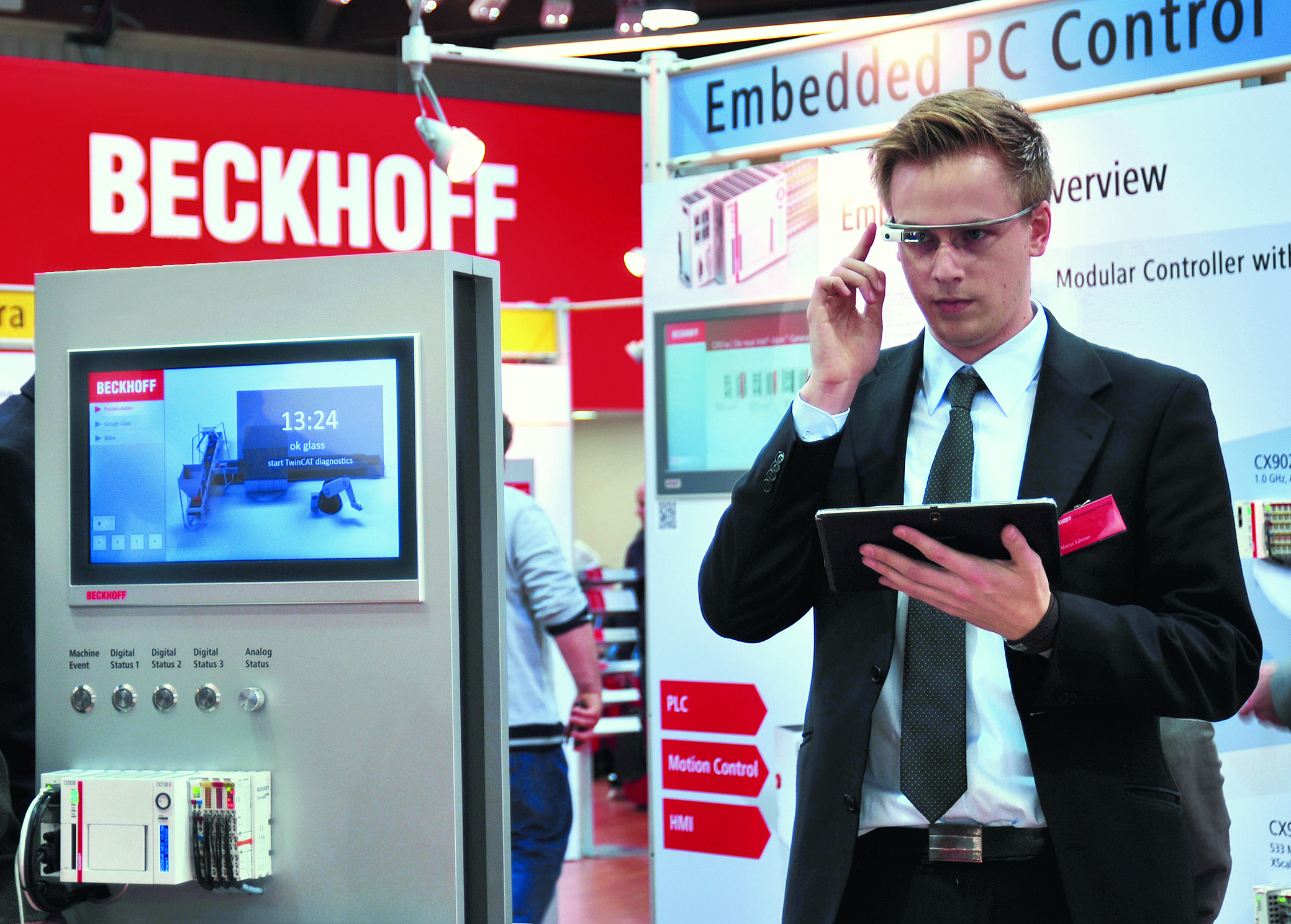 technology, convinced that, as the “generally accepted technology platform”, PCs will run factory automation like condition monitoring and robotics. One eye-catching product is its Google Glass for industrial automation, where Beckhoff has developed the sensors and interface to see the status and the specific events of a machine.

“You can document what you see, and because it is hands-free you can control the machine anywhere, for example at home you can see the status of a machine at work,” says Martina Fallman of Beckhoff. “You don’t need to use Google in an open network but can communicate directly via a WLAN network.”

Google Glass is voice activated, allowing the user to not only switch the machine on and off, but also ask questions about its operating performance. 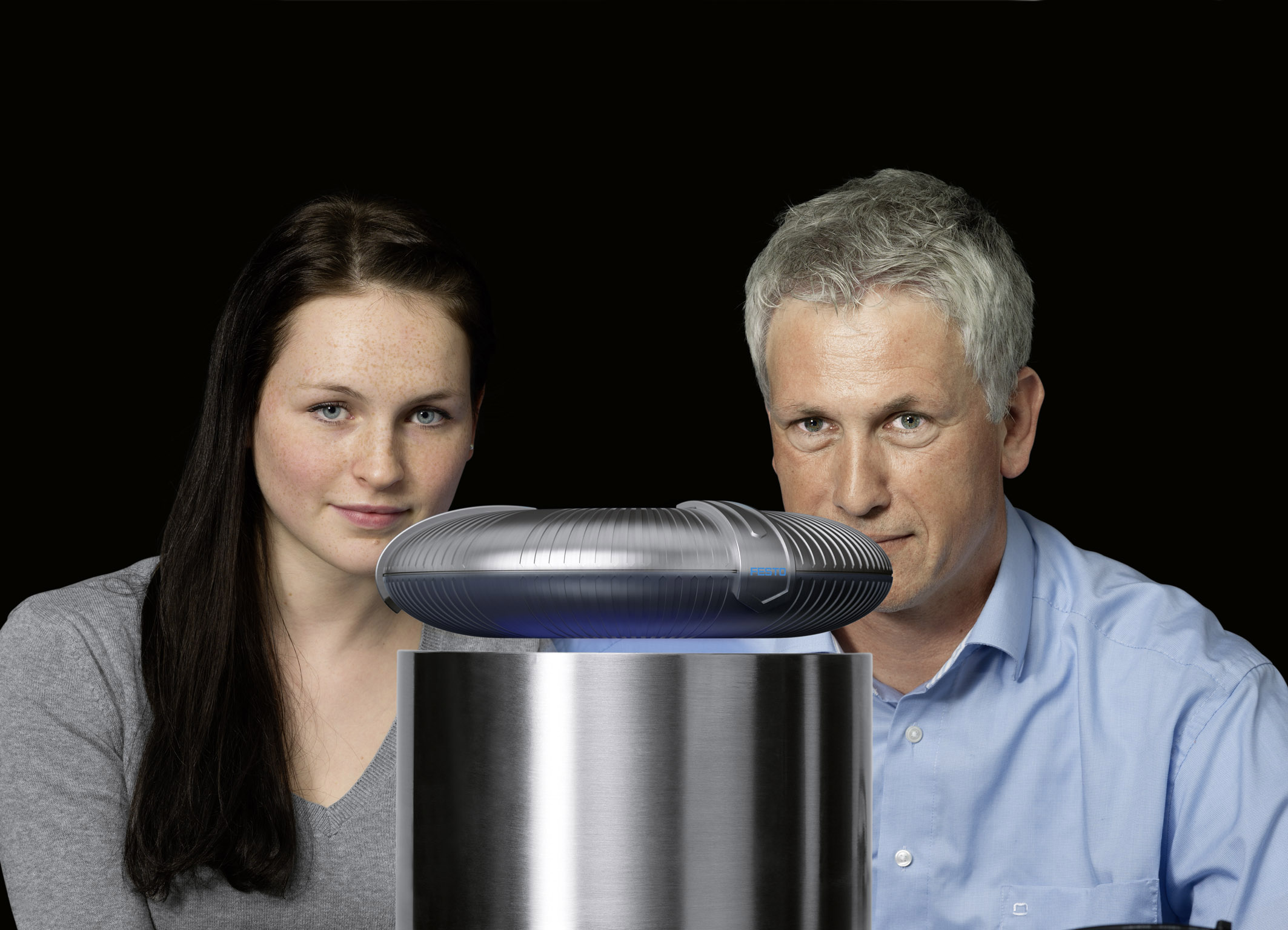 Typically putting on head-turning exhibition stands with slick, animatronic-themed displays of automation equipment, Festo is demonstrating several applications of Industry 4.0 at Hannover. One is an air preparation device that monitors the air consumption of complicated production processes.

“By using methods of artificial intelligence on this device you can ensure the quality of your production process easily,” says Dr Volker Nestle, head of future technology at Festo. That’s a typical example of how intelligence can today be integrated into standard components of production today quite easily.” The technology on display uses compressed air but it could use an electrical current.

How does the artificial intelligence (AI) work? “It will learn what is a good process, not what is bad,” says Dr Nestle. “It’s very difficult to teach a machine what is bad because you have to define what is bad – there are lots of reasons for what might be bad in the production process. You want to produce goods, not errors.”

For example Festo is working on several AI methods to measure flow consumption. Powerful processors on the component receive data from sensors and compare statistics to check if the data is good, or typical, or if there’s something wrong with the process. “Because you always monitor the same signal, by doing some statistics such as algorithms, on the signal, it reveals when there are sup-optimal flows,” says Dr Nestle.

As well as its AI technology, Festo will demonstrate education solutions for integrated automation, using the “Transfer Factory” by Festo Didactic, superconductors for automation technology and developments from the Bionic Learning Centre at the Hannover Messe.

A big family-owned manufacturer of connectors, cables and automation equipment, 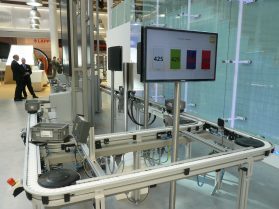 Harting was an early engager with Industry 4.0. “How do you automate?” asks Philip Harting, a partner and senior vice-president for connectivity and networks at Harting. “In Germany we talk about the automation pyramid, which means over the next 10 years it will look different, it will be diluted. Communication then will not only be vertical and horizontal but in all directions.”

Harting has moved from being an engineering company manufacturing hardware such as transponders and switches, to developing software as well, now providing complete packages via a new company launched in January, Harting IT System Integration. “These [Industry 4.0] developments are being driven by IT,” says Mr Harting, whose company is using industry applications like predicative maintenance to demonstrate Industry 4.0.

Collaborating with software company SAP’s HANA data cloud, at the Deutsche SAG meeting in September Harting demonstrated to 3,000 people the simulated operation of a pumping station. The demonstration showed that specific maintenance process were initiated directly from data monitoring. Equipment operating data was transferred via sensors to the HANA database. “In a microsecond it can compare [this station’s performance] to the equivalent data generated in more than a hundred other locations, forecasting, for example, at this location in five hours within a certain probability the pumping station will stop working,” says Mr Harting.

Such accurate, automated predictive maintenance could save a lot of expensive downtime in the automotive and power generation industries.