A British Army veteran turned Paralympian has gained a competitive edge over his fellow sportsmen thanks to a revolutionary technology devised by a Bristol-based team of digital engineers. 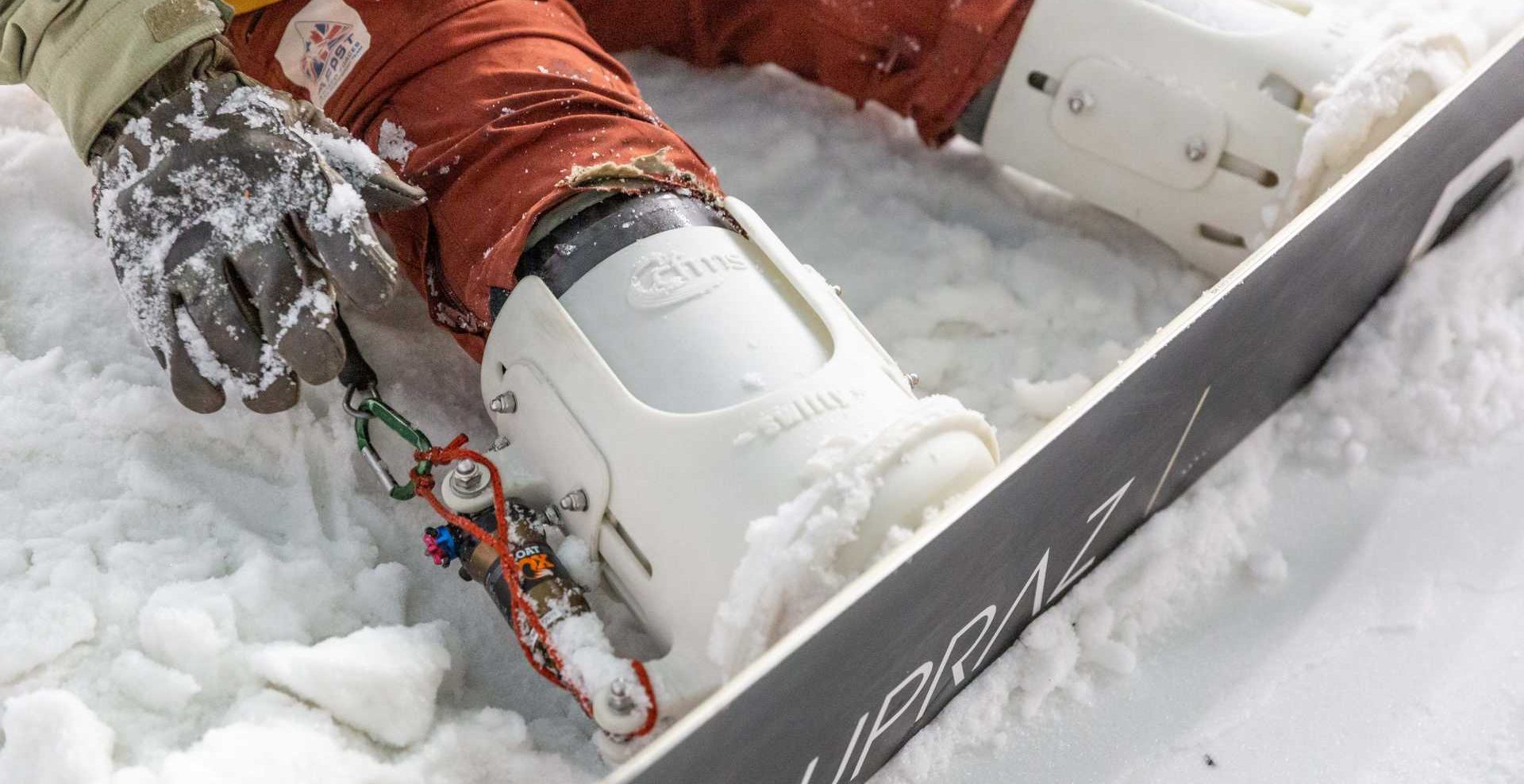 Davide Bianchi, head of advanced simulation at CFMS, who led the project, said his team leapt at the chance to manufacture a product that is understood to be a world first in 3D modelling, and the result of a collaborative effort by a group of relatively young engineers.

Bianchi said the snowboard bindings, printed by Airbus, represented nearly 500 hours of design and production spanning the better part of two years, as well as being the result of “a series of 3D printing and complex high-value design techniques”.

Darren ‘Swifty’ Swift branded the bindings a ‘game changer’ for Paralympic snowboarding. The former soldier turned athlete approached the not-for-profit organisation with his own design after being inspired to get into the sport while sit-skiing in Italy some 15 years ago.

The 53-year-old lost both his legs just above the knee when an IED exploded beside him while on his third tour in Northern Ireland in 1991. Swifty survived the blast, but a dear friend and fellow soldier was tragically killed during the same incident.

Since then, the Army veteran who grew up in Uxbridge, has continued to nurture the desire that first attracted him to a career in the British Army as a 16-year-old boy – namely, seeing the world and going on exciting expeditions. He has also stubbornly pursued what he describes as ‘weird’ sporting activities, such as skydiving and canoeing. 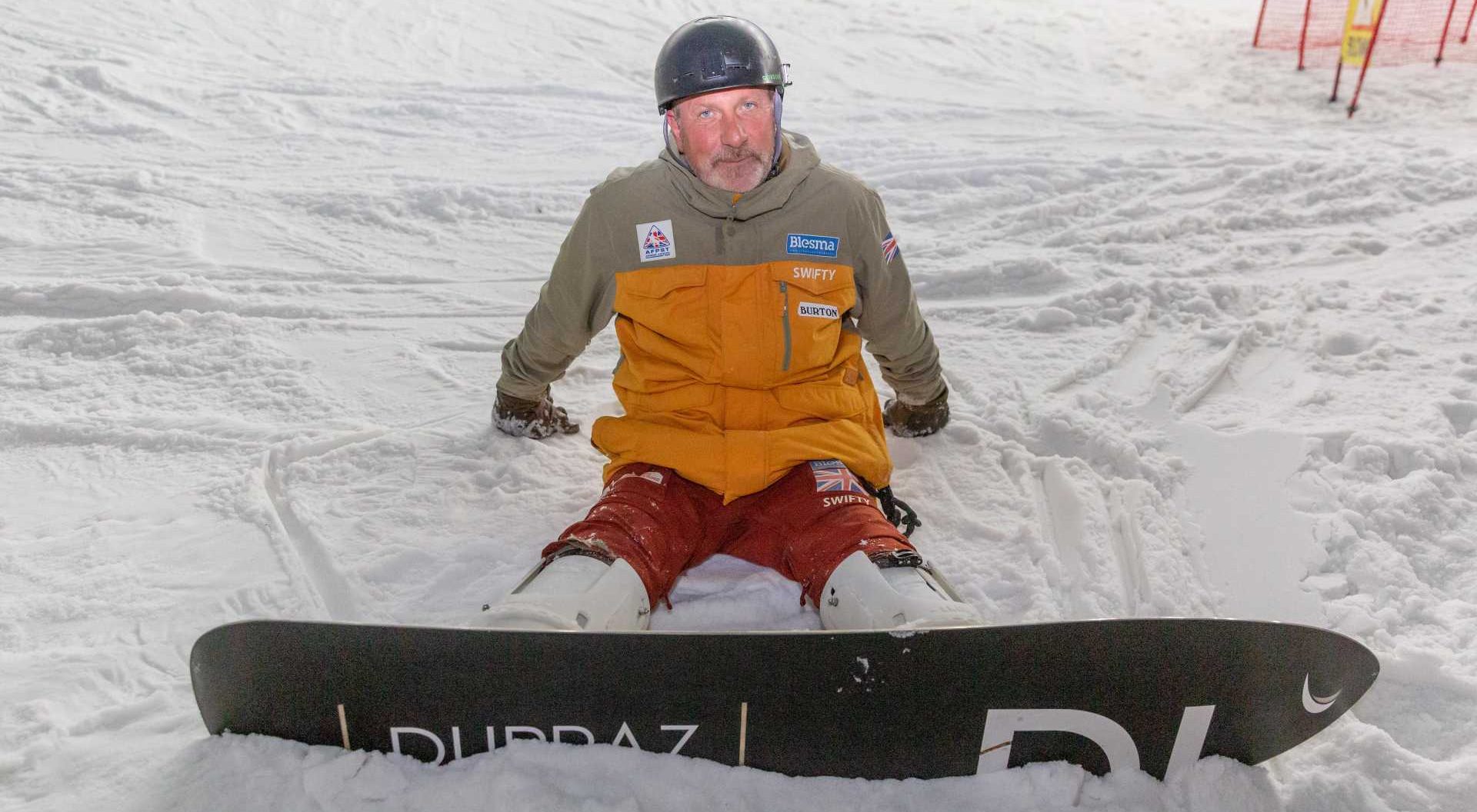 Swifty has now set his sights on bringing his passion for double above-the-knee amputee snowboarding out of its infancy and into prominence in future Paralympic Winter Games. He has spent the past three years training in the sport, and with the aid of the ‘revolutionary’ bindings built by CFMS, Swifty hopes to be competition fit in time for the Beijing winter sports event in 2022.

He added that while some minor alterations to the product are still necessary before he eventually sweeps the gold, he cannot but help remark on how CFMS’ design has alleviated overall pressure on his spine and pelvis that previous iterations had inflicted.

Back to first principles

Speaking exclusively to The Manufacturer, Davide Bianchi, an aerospace engineer who trained in Milan, said Swifty’s design concept forced his team of engineers to fall back on physics-first principles when approaching the project because, “there were no other examples” out there to draw from.

“The design was complicated because in the beginning we didn’t know what technology to use, and because we were agnostic around the type of discipline or object,” he said.

“Once we captured all the requirements, we started doing some first-principle calculations to understand what dimensions we needed. This object needed to have adjustability, so we had to create something where you could have different angles for different athletes.

“We realised quite soon that we needed a technology that could allow us to create very fine details, so we discarded all the traditional machining technologies because there were angles that couldn’t be produced – and the only one left, effectively by exclusion, was 3D printing.” 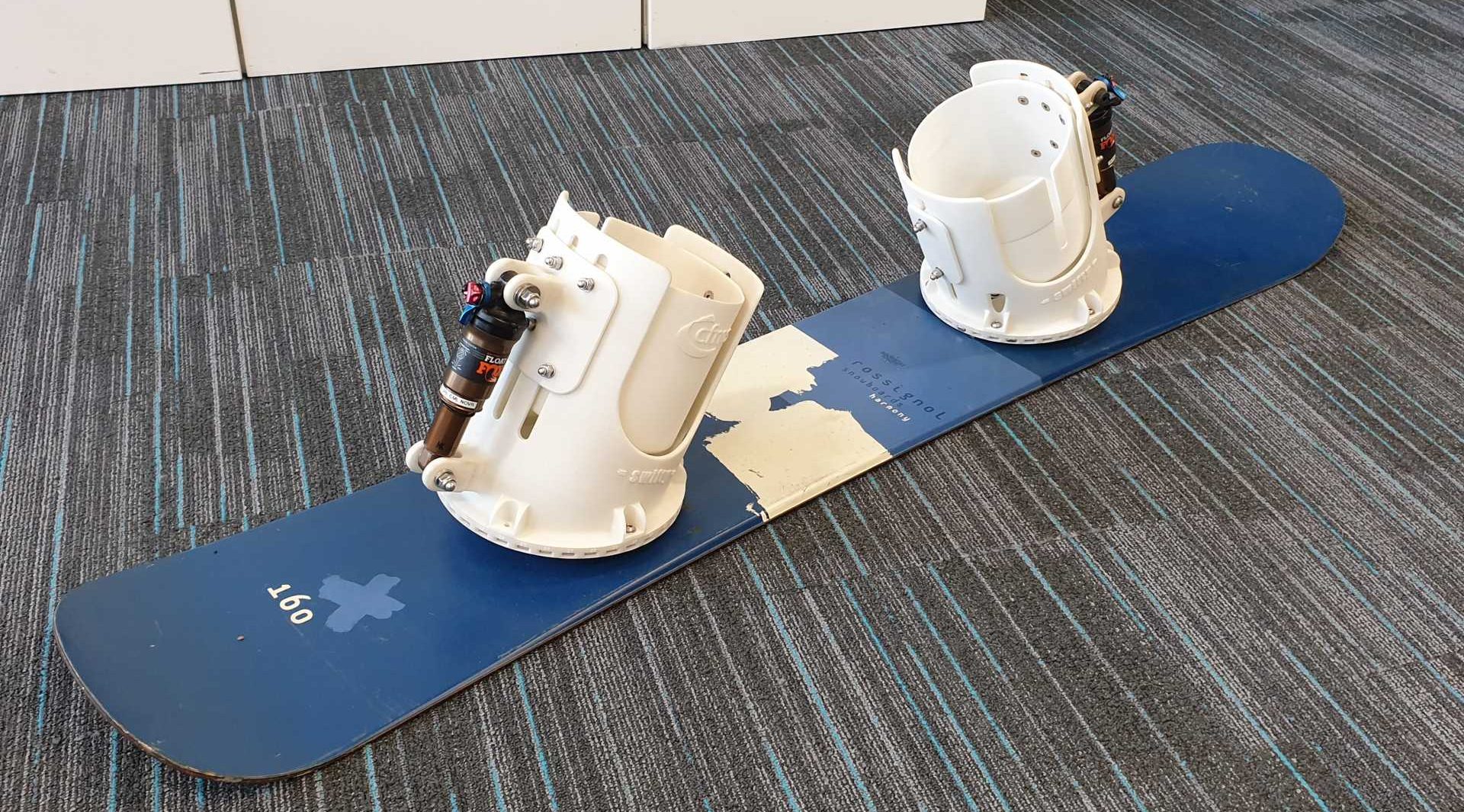 CFMS needed to create a product capable of withstanding the impact of the slopes, in order to relieve pressure on Swifty’s pelvis

Bianchi said CFMS’ FDM printer, traditional in model making, had unsuitable properties for their requirements and so they chose SLS (selective laser sintering), which broadened the range of materials at their disposal. “The problem is, if you print in metal it costs a fortune and we didn’t want to spend such sums because future customers wouldn’t be able to afford it,” he said.

“So again, by exclusion, the only material left was polymer. In this particular case, it’s glass-fibre-reinforced nylon. We designed it for SLS, but one of the technique’s biggest problems is that whatever you design in CAD (within certain nominal dimensions) – when you print it, it doesn’t come out quite the same.

“You always have tiny tolerance problems, which for the complex product we made is an issue. There are a lot of little sliding components that must move within very tiny tolerances.

“So, once we’d done all of the design, literally drawing 3D models by hand, we also did structural analysis, and when we’d nailed down the final design of what we believed it would be, we started printing. We printed all the connections, all of the joints to make sure that whatever we had in our 3D models was correct.

“In some cases it was, and in other cases we had to rework features and details, otherwise parts wouldn’t match. And when that was done it was just time to print all of it.” 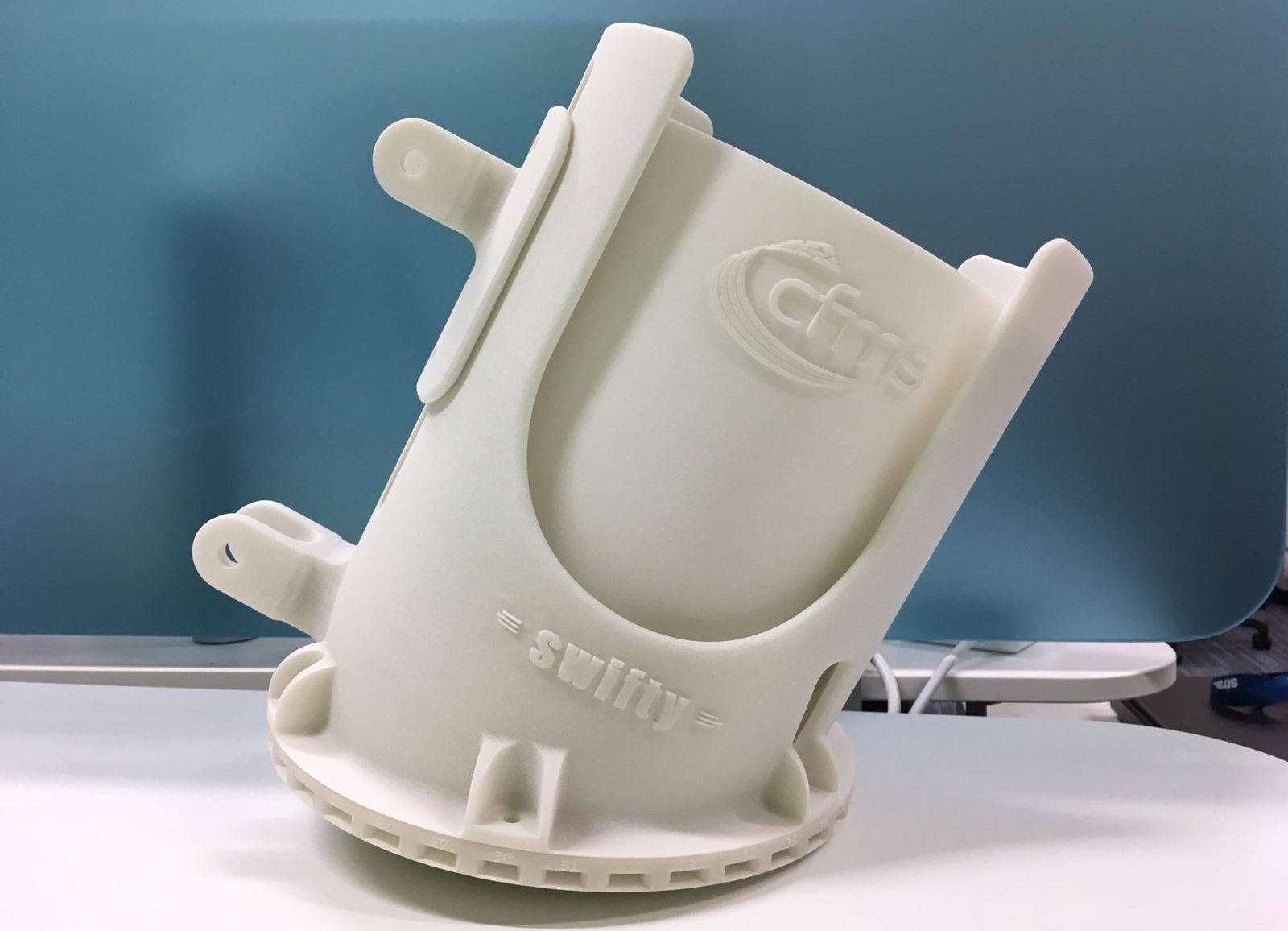 Their method and approach proved to be a success, and despite no one in Bianchi’s team having previously set foot on a ski slope, he told The Manufacturer that the bindings “worked fine” during their first trial at The Snow Centre in Hemel Hempstead. “This is the first time that we’ve done something like this. But it was quite successful – we did everything digitally and it worked first time,” he said.

“There is something beautiful at CFMS in that we are effectively covering many different fields and engineering technologies. But the other beauty is we are very diverse, so each individual member has expertise in some field – for example, I’m a pure structural analyst – but we have knowledge in other fields.

“For instance, I know 3D printing fairly well, whereas others know about friction and fluid dynamics and we are able to investigate all the basic physical phenomena in detail and apply them to any case.”

During the design and test phase, Bianchi said his team were confronted with creating a product traditionally used by able-bodied sportspeople, only this time for someone without knees and that Swifty’s unique stance and load distribution were key factors in that process.

“If you’re an able-bodied person and you’re uncomfortable in a certain position you can bend your knees and the job is done. Swifty can’t,” he said.

“We had to understand how much load is bearing down. So, we bought a snowboard with bindings for an able-bodied person and, standing in the middle of the office, and with the bindings on, tried to simulate going up and down. It was kind of ridiculous, but it worked.

“There was no literature out there, so this was a difficult part of the project to nail down. We were able to gain some data from sensors placed beneath the original bindings, but according to the test data that wasn’t going to be very useful. So, we made an educated guess and effectively worked everything out ourselves.”

He added that the product proved it was possible to customise components to allow other people with a similar disability to ride or compete, merely by adjusting them to their personal requirements. “It’s a technology that can be fitted to any case. Anyone in a similar situation can be helped – we have all the original CAD drawings and data, which we can modify accordingly. The beauty, in my opinion, is that you could take any type of disability and apply the same engineering principles.” 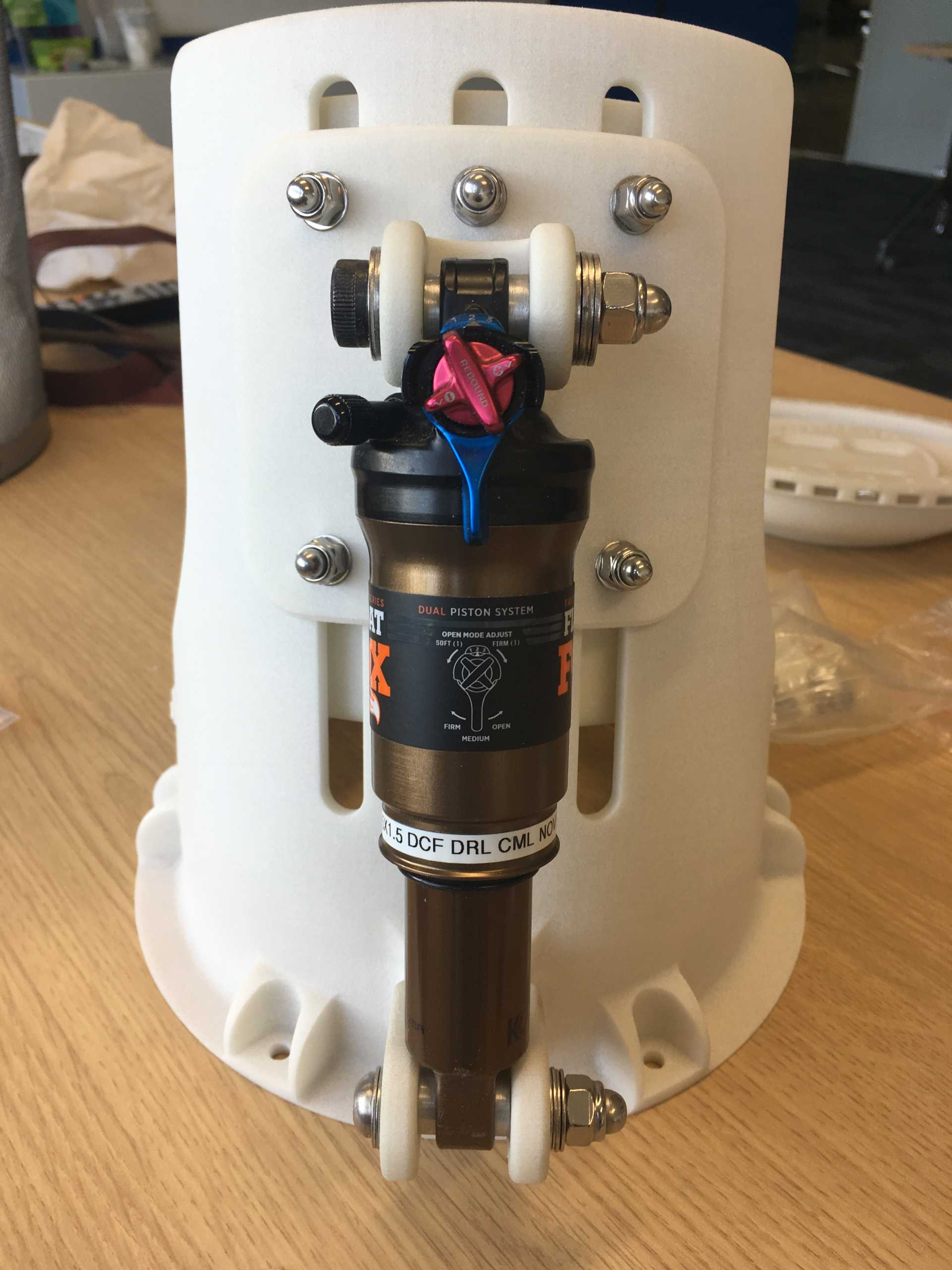 From tragedy to triumph

When Swifty looked down at his body, and the body of his fallen comrade following the explosion in Belfast in 1991, the young soldier believed his life was at an end and that he too would soon die. But he was saved, and when he emerged from hospital, he was transported to Headley Court in Epsom, what used to be Queen Elizabeth Hospital in Woolwich and the last of the military hospitals.

Three weeks into his rehabilitation he demanded that he be allowed to bathe himself and when he was finished, he saw – for the first time since the blast – his body in a full-length mirror hanging behind the door. “I was just horrified by what I saw,” he said. “And I remember thinking, ‘what am I going to do now?’”

In fact, Swifty would go on to have many achievements, from travelling the world and learning a range of new outdoor sporting activities, to designing a custom pair of snowboard bindings and seeing them through to production, potentially revolutionising attitudes in disabled athletics and sport more generally.

At present, he is believed to be the only double above-the-knee amputee in British snowboarding and is campaigning for better categorisation in his discipline.

In 2020, he will join the Armed Forces Para-Snowsport Team, ahead of the InterServices Championship in Méribel, France. Then he’ll start professional training for the 2022 Paralympic Winter Games in Beijing, carried along by his own vision to what will surely be victory, a vision shared by David Bianchi and his manufacturing team at CFMS.

CFMS would like to thank University of Hertfordshire graduate engineer Stephen Peake, who was an integral part of this pro bono project.