Research released last month reports only 60% of girls aged 11 to 14 think they could become an engineer if they wanted to, and this figure sharply drops to a quarter when girls reach 16; why does gender disparity in the sector remain?

The research, published by EngineeringUK, examines female under-representation in the engineering and manufacturing industry, where women make up just 11% of the entire workforce.

It suggests the disparity is largely due to girls dropping out of the educational pipeline at every decision point, despite generally performing better than boys in STEM subjects at school.

The Manufacturer has previously reported the glacial progress of gender and diversity in manufacturing and engineering, and even hosted the event, Women & Diversity in Manufacturing Summit last June.

This explored how critical it is to have a more diverse workforce in manufacturing, and the countless benefits companies could utilise.

The research suggests that participating in hands-on activities and speaking to engineers has a positive impact on young people’s – particularly girls – knowledge of engineering jobs.

But how can we retain and nurture this natural interest in STEM subjects at the tail-end of primary education throughout secondary school and into higher education?

The sector needs more female role models in STEM professions, but with the consistent negligible increase of women in these job roles; how can that happen?

CEO of Women’s Engineering Society (WES), Kirsten Bodley spoke previously to The Manufacturer about the topic.

The former chief executive of STEMNET, whose background is originally in chemical engineering, explained that it is crucial to realise the potential women have in the engineering sector, offering up different skills to their male counterparts.

She said: “There are so many opportunities for women in engineering, exciting careers and they are just not being utilised. There is a massive need for skills and we need to encourage women into the sector.”

There are a number of initiatives attempting to improve the visibility and number of women in the sector. Most recently, Mattel Inc released a Robotics Engineering Barbie to encourage girls into the industry.

But the company has only one woman – out of seven –  on its board of directors, if the internal structure of the company doesn’t reflect initiatives, it is, just hypocritical.

Alongside this, The Little Miss brand created by Egmont Publishing (one-third of their board of directors are women), revealed a new character earlier this year, Little Miss Inventor, could this encourage young girls into engineering or manufacturing roles?

Certainly, one of the key aspects of getting girls into STEM subjects is seeing positive roles models in the industry, which challenge conditioned stereotypes.

STEM themed Barbies and Little Miss Inventor could help to question gender roles, and make girls more open to the idea of a career in the sector, but the initiatives lack any real drive or sustenance.

Supporting women in and through STEM

Despite the lack of confidence and or knowledge girls have to pursue a career in STEM, a survey of 300 female engineers from the Royal Academy of Engineering concluded that 84% were either happy or extremely happy with their career choice, with a further 98% believing it is a rewarding path for women.

If being an engineer is a fulfilling future as these statistics would suggest, why are female engineers a small fraction of the industry’s workforce?

The need for more role models is reflected in the necessity to keep women in STEM subjects, where sometimes, as Bodley explained they are pushed out because of caring roles, maternity leave and or no progression opportunities.

She said the sector needs further “mentoring” and “leadership” in order to support women in their STEM careers and stop them leaving job roles, which she explained often happens.

As the statistics show, girls’ interest in STEM subjects drop when they are 16, yet engineering has proved to be a popular and fulfilling career choice for women. The UK needs to make careers in STEM more accessible for women, by encouraging young girls and keeping women in the field, in order to create the positive role models it needs. 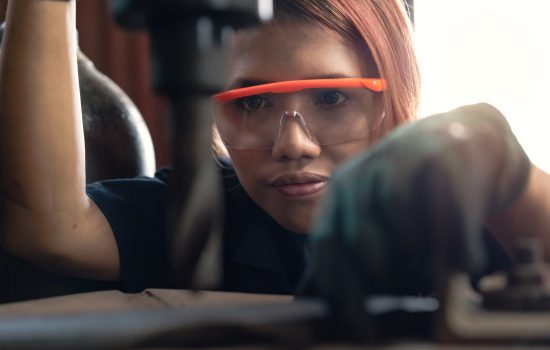