GE’s UK & Ireland CEO, Mark Elborne talks to The Manufacturer’s Industry Editor, Federico Ercoli about the heavy stake the company is putting behind the future state of manufacturing.

There is often a thin, nerve-wracking aura of pressure looming in the air before an interview with the president or the CEO of a big multinational.

Usually due to the stereotyped portrait that depicts the job title as an inaccessible, workaholic and machine-like individual with more ego than humanity, the task seems daunting most of the time.

In fact, when asked to interview General Electric’s (GE) president and CEO for the UK & Ireland, Mark Elborne, colleagues smirked and sarcastically threw a “no pressure” at me.

Thankfully, succumbing easily to despair is not one of my weaknesses.

After a couple of rescheduled meetings due to two, very dear to Londoners, tube strikes, I headed to GE’s headquarters in Hammersmith on a promisingly overcast morning.

As first impressions go, the building largely lived up to the company’s reputation. From the outside, The Ark (such is the name of the building) looked so modern it seemed a 3D render.

Seeing me captivated by it Elborne courteously filled me in about the history of the building.

“It was designed by a British architect who worked for most of his life in Sweden,” he told me. “Before us it was occupied by a Canadian corporation [Seagram] that dealt in alcoholic drinks,” he added.

It quickly became clear that Elborne is far, far away from the stereotypical category of CEOs earlier conveyed. 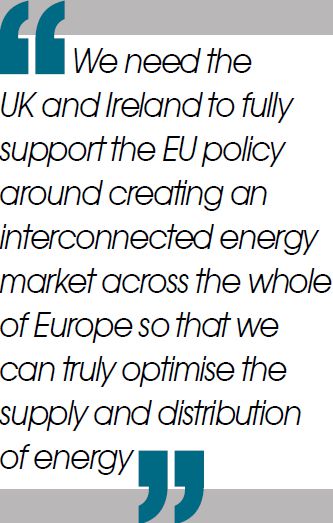 A comfortable and relaxed mood rapidly filled the room and I almost forgot I was there to talk about business and manufacturing with one of the most influential figures in the industry.

Everything was steering away from the grey scenario I thought I would walk into. Elborne naturally made room for an even more interesting conversation.

So, first things first. Looking up to certain people usually makes me wonder how they deal with the roles they cover. Do they manage to separate work and private life? What does their average day look like?

“My average day is long, I’m at the office by 8am and I rarely leave before 8pm, unless I am going out for an event in the evening, which probably is two or three nights a week,” Elborne said.

“We all have to manage emails and manage the responsibilities of delivering what’s key to us as a company. I spend a lot of time engaging with customers, government and external stakeholders, and all that takes time.

“In the end, there has to be a balance between time doing work in the office and the rest.”

Just as I imagined. Although, he appeared rested, so there must be a secret he didn’t let me in on.

The revolution is here

GE has been featured heavily in the mainstream press recently, citing a “new industrial revolution” as currently under way.

According to Elborne, there are three things driving the change, “The first is the progression of what we can do with analytics and the creation of, for example, algorithms that provide the ability to be more predictive.

“The second is the ability to do more with gathering data, for example additive manufacturing, enabling companies to put sensors in place in machines where traditional manufacturing wouldn’t; so one can really start gathering data that is meaningful towards driving that greater outcome.

“The third thing is the world being more and more connected.”

These are all, to the modern manufacturer, sounding synonyms of big data, servitization (Manufacturing Services) and the Internet of Things (IoT). All tools and models that can undoubtedly serve as catalysts for this new revolution.

So what is really driving it? “A need to create new business models. The opportunity that comes from the ability to analyse and understand data creates a situation where we and our customers need to think more intelligently about how we can help optimise production; reduce costs; drive better efficiency; create better outcomes, and deliver solutions,” he said.

“It’s all part of a journey. Take the transformation from selling a product to selling a solution, for example.

“The solution doesn’t necessarily have to be a piece of equipment that delivers a different outcome, it is the universe within which that equipment may operate and what you can do with the information you gather from it that changes everything.”

Servitization can be a way of delivering outcomes for customers whose financial model makes them unsuitable for the very significant cap-ex investments required for some technology.

But if implementing servitization means changing business model and perhaps re-targeting and re-shaping the core business of a company, big data and IoT will require adequate infrastructures, efficient and environmentally safe energy sources, as well as manufacturers’ willingness to update production practices and the potential ability to change the cultural mindset of consumers.

All of which are subject to time constraints, technological advancements and essential governmental support.

Still one of the most pressing issues among UK industry is energy security. Recently released government figures show that fossil fuels are still the key energy source in the UK despite hitting a record low of 84.5%.

Low carbon emissions sources are on the rise with 14.2% and only 7% of those account for renewables supplies.

Being still a long way from making renewables a reality as a viable alternative in energy sources, Elborne thinks that they are, nevertheless, “At the front of the industrial agenda right now”.

“There is a clear ambition and a path to delivering sufficient renewable energy generation, at least to meet the 20% renewable generation target,” he said.

“I believe that to ensure that we meet the 20% target for both transportation and heat, we will need to put in place the use of renewable energies; this will create challenges for 2020.

“What we should focus on is the biggest challenge: managing our energy mix against the government requirements on balancing energy security, cost and carbon reduction.

“The UK has, generally, the right mechanisms in place to manage this today. Obviously we need a new generation of nuclear and gas energy harnessing and depletion techniques. For example, gas is a lot cheaper now and with the termination of a number of coal plants, progress can be made.”

GE’s involvement in the run to renewables development and deployment is substantial and is easily justifiable if considering the large commercial interests that revolve around the sector.

Recent examples include the company’s decision to increase the annual production capacity of its Campinas wind turbine factory in Sao Paulo, Brazil (from 400 to 500 units a year); the fulfillment of the order for a supply of five turbines to a wind farm project near Crosey Le Grand, in France; the supply of 60 wind turbines for the Meikle wind project in British Columbia, Canada; and 50 solar inverters for the Hosoe Project on Japan’s Kyushu island.

As much as it is globally, energy is also a crucial issue in the EU and several politicians and manufacturers say the UK cannot stand alone in the energy race. Something that Elborne doesn’t seem to disagree with.

“We need the UK and Ireland to fully support the EU policy around creating an interconnected energy market across the whole of Europe so that we can truly optimise the supply and distribution of energy, which ultimately will bring down the cost of energy to consumers.

“We have to have indigenous energy generation in the UK, where a significant amount of gas is imported. We need to be interconnected, which helps us with supply from markets in Europe that have surplus.”

That is, if the UK does not exit the European Union.

Should we stay, or should we go?

Elborne has been relatively vocal in the press, stating his strong opposition about the UK opting out of the EU.

Elborne stressed the detrimental effects of an exit for both the UK and GE, which has a large part of its $175bn conglomerate and 18,000 employees in the UK.

“Our ability to operate without barriers within Europe is hugely important, not just in terms of how we support customers with our products, but also in how we ensure that we’ve got all the best people coming into the company to help us support our growth,” he said.

“The importance of driving technology through an integrated European platform is key. From a regulatory standpoint, having a single set of requirements makes doing business easier and as part of the European Union, in terms of trade deals or reaching trade agreements with other countries, this power is possible.”

Companies like GE have the power to shape markets and any corporate transformation the company undergoes can resonate heavily throughout the industrial landscape.

Recently, the biggest shift in direction has been the re-balancing of the business towards being predominantly an industrial company.

Mark Elborne will be speaking at The Manufacturer’s National Skills Conference.

In partnership with The Manufacturing Technology Centre, the two-day event will provide a forum to discuss the skills issue currently affecting all aspects of British manufacturing.

“At the beginning of this year we were 75% industrial 25% financial,” Elborne said. “It was a huge decision made in spring this year by the chairman and the board.

“We’re retaining three of our businesses that support our industrial production at our aviation company and as we go towards rebalancing, obviously we’ve got the Alstom acquisition that is very important. It’s going to add significance to our energy portfolio.

“Obviously the chairman and the board will be looking into the key infrastructure areas that need re-balancing (oil & gas; energy; renewables; healthcare; transportation) and into the areas we need to continue to grow while continuing to invest in order to stay competitive.”

If we are, and we most likely are, undergoing a new industrial revolution, it is safe to say we will see GE and similar companies at the forefront, driving the new shape that manufacturing will take – whatever that shape might be.