Fives of the world’s biggest cranes have docked at the quay at the London Gateway Container Port in Essex following a three-month trip from China.

The cranes, transported on the container ship Zhen Hua 26, are among the biggest ‘goliath’ cranes in the world and are the largest to be delivered to the UK.

At 138 metres tall, two and a half times taller than Nelson’s Column, and weighing 2,000 tonnes, the cranes have been transported upright on the ship’s deck on the voyage from China where they were manufactured. 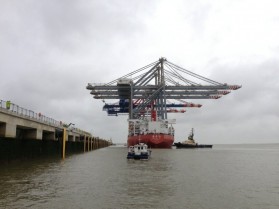 These will be the first quay cranes destined for the new London Gateway, which is on the site of the old Shell Haven refinery on the Thames. A further 21 cranes will be delivered once construction on the six main berths is completed.

The quay where the cranes will sit will be over 2.5 km in length once the port is fully operational.