Posted on 3 May 2017 by Jonny Williamson

Over five days last week, Hannover Messe served as a global hub for every sector and technology involved in the digitisation of industry. The Manufacturer recaps the highlights.

Almost 225,000 people from every corner of the globe arrived in Hannover, Germany as April drew to a close, all seeking to immerse themselves in the potential of intelligent robots, adaptive machines, integrated energy systems and the next step in the digitisation of manufacturing.

According to Dr Jochen Köckler, member of the managing board at Deutsche Messe, the key question on everyone’s lips was “How can I best get my company into shape for the digital future?”

The show’s special focus for 2017 –  Integrated Industry, Creating Value – put a major spotlight on the benefits of Industry 4.0 and the role of humans in tomorrow’s integrated factories.

As this year’s featured partner country, Poland emphasised the need for close cooperation throughout Europe, while showcasing its credentials as an innovative partner to global industry.

Managing director of the German Engineering Federation (VDMA), Thilo Brodtmann explained: “Industry 4.0 is now well past the trial stage, and is already generating real benefits in application. The show clearly reflected the industry’s buoyant mood – a mood powered by having exactly what it takes to get the job done for the benefit of people everywhere.”

Dr Klaus Mittelbach, CEO of the German Electrical and Electronic Manufacturers’ Association (ZVEI), remarked: “Industry 4.0 is booming, and Hannover Messe has been promoting the topic from the very start. Moreover, the fair has made it amply clear that digitalisation calls for a European identity. The pressing task at hand is to build the digital union at top speed.”

SMEs gearing up for digitisation

With almost every passing week, another study is published with dire warnings that SMEs are unprepared for digitisation; yet, Hannover Messe told a different story, according to Köckler.

He referenced the numerous component supplier companies exhibiting, noting: “These companies are now digitising their processes and establishing connectivity with their partners, because they know that their customers – from the automotive industry, for example – expect the end-to-end digital tracking of each and every part every component.”

Another example consisted of Salzgitter AG, which presented a coordinated display at underscoring how Industry 4.0 and digitisation have changed the way it sees its business, and the solutions that are already in place.

Cobots in the spotlight

Collaborative robots or ‘cobots’ are about to fundamentally transform the way humans work in factories. Their connectivity, artificial intelligence, innovative sensors and intuitive operation allow them to communicate directly with humans, as they learn autonomously and swap instructions with other cobots.

Köckler commented: “Not only are cobots an exciting prospect for large companies – many SMEs were also at Hannover Messe to find out about these new helpers for their manufacturing operations.”

From sensors to platforms

Previously sensors were viewed as the main technology for connecting different machines, but this year’s event put platform solutions to the fore, i.e. cloud-based network connections for the entire production operations, including data collection and analysis.

Köckler explained: “The trend towards the ‘digital twin’ concept in the production environment is opening up entirely new vistas for industry. If testing can be carried out in virtual reality – for example, to see whether a new production line is going to work out – this makes it possible to bring products onto the market faster, at lower cost.”

Energy systems of the future

Exhibitors in the energy halls demonstrated how the energy systems of the future might well operate. The emphasis was on new energy storage technologies, which included serial production-ready electrolysis stacks, making hydrogen solutions a viable alternative even today.

Some totally new approaches were also in evidence in the solar technology area, with several companies displaying ultra-thin, flexible solar foils that generate electricity even in low-light conditions, opening new options for the practical application of the technology. 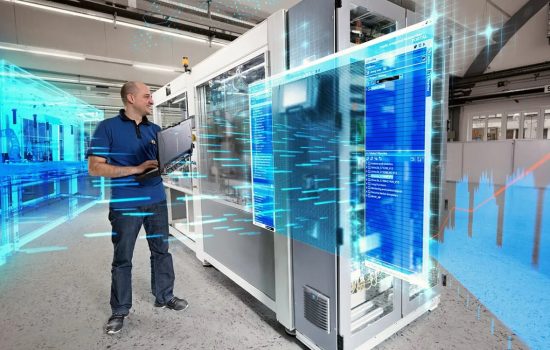