Posted on 3 Sep 2020 by The Manufacturer

With 17 sites now operational in the UK, Rosa Wilkinson looks at ways in which High Value Manufacturing Catapult has responded to local and national needs, helping manufacturing companies connect better and bringing vital jobs back to historically neglected areas in the process.

Manufacturing is a vital part of our economic mix. With annual output worth some £192bn to our economy, it provides high-skilled jobs, produces some 44% of our exports and, as COVID-19 has shown, gives us the capability and resilience to tackle global challenges.

However, which of us hasn’t heard the claim that ‘we don’t make anything anymore’?

That cry may be a perfect example of ‘fake news’ – the UK remains a premier division manufacturing nation, but our position in the league table is under threat.

Now, as the country looks to bounce back from the effects of the pandemic, the High Value Manufacturing (HVM) Catapult is playing a key role in efforts to transform our industrial performance in ways that will both keep us at the top table of global manufacturing and kick-start the economic future of historically neglected areas, bringing high skilled jobs and prosperity back to deprived communities. 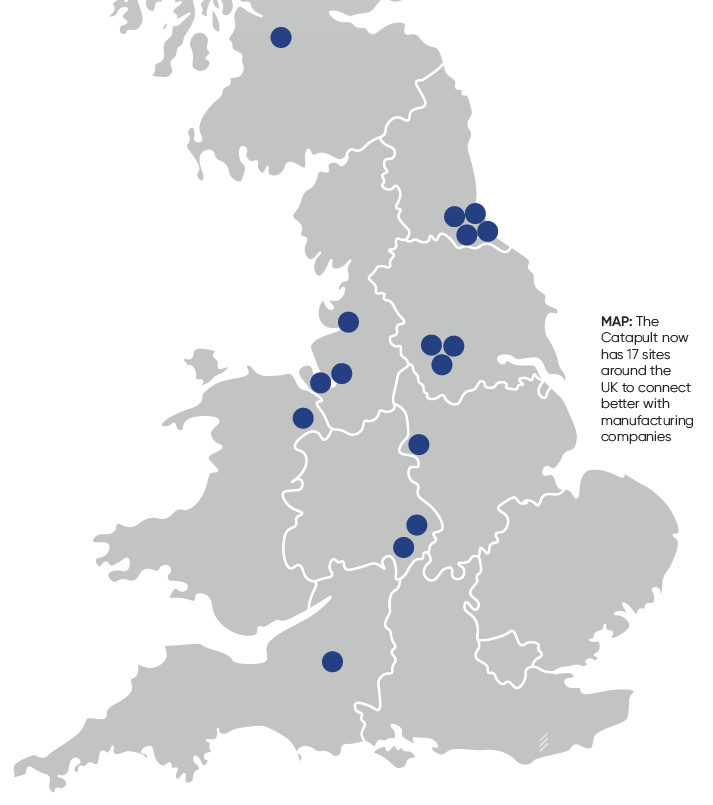 When the HVM Catapult was created in 2011, our footprint reflected the locations of the seven founding centres: Renfrewshire, Darlington, two Centres near Sheffield, Coventry, Warwick and Bristol.

Today, the Catapult has 17 sites around the UK to connect better with manufacturers and help them to transform their operations.

Wherever we have set up a base we have seen the magnetic effect of our presence, drawing in investment from around the world, attracting multinational firms and national institutions keen to access our expertise and, of course, creating new jobs in the process.

Built on the site of the historic Orgreave coking plant, the Advanced Manufacturing Park is a beacon of industrial transformation.

With the AMRC as anchor tenant from its launch, the cluster of global companies and their supply chains now established on the site is one of the most concentrated manufacturing bases in the UK.

The likes of McLaren and Rolls-Royce were drawn to the AMRC’s expertise with their factories surrounding the AMRC’s facilities. With the Nuclear AMRC joining the park in 2010, it has one of the widest sets of engineering expertise in the UK.

According to the Centre for Cities’ 2019 Parks and Innovation report, the site outperforms all similar science parks across the country, with 66% of jobs in the area in high value-added manufacturing.

The AMRC and Nuclear AMRC’s work is central to this, but the benefits of the R&D carried out there does not only benefit local firms and workers, it also reaches into other parts of the country.

With projects like those with Rolls-Royce de-risking a £100m investment in Tyne and Wear and securing 300 highly skilled jobs, the AMRC and Nuclear AMRC are regional assets with national impact.

Inevitably the centre’s success is also attracting the attention of other cities looking to enjoy similar impacts.

Just a year after opening its first workshops at Infinity Park, Nuclear AMRC Midlands is already delivering innovative projects in sensors, control systems and digital manufacturing, and helping the region’s young people develop skills for the future workforce in ways that will be key to the area’s post-Covid resurgence.

Its transformational work with companies across Derbyshire and Nottinghamshire highlights the impact that insights from the nuclear industry can have across sectors.

With a full-scale facility in the works, the centre is expected to anchor investment in the region, bringing innovative companies together to form a collaborative cluster.

CPI’s facilities at NETPark in Sedgefield, one of the fastestgrowing science, engineering and technology parks in the UK

CPI’s Formulation, Photonics, Printable and Hybrid Electronics facilities are key anchor tenants for NETPark in Sedgefield, one of the fastest-growing science, engineering and technology parks in the UK.

As one of the first companies located at the park, CPI enabled the growth of a globally recognised printable electronics innovation cluster, drawing more than 550 highly skilled jobs to the area.

Driven by CPI’s strategic partnership with both Business Durham and Durham University, the cluster is continuing to grow with CPI working to support and accelerate companies based at the site.

With a variety of urban and rural environments and a large transport infrastructure, the West Midlands is the perfect place to develop the future of mobility.

Our WMG Centre is playing a pivotal role in creating a regional centre for transport innovation.

With a leading position in the Midlands Future Mobility project, WMG is bringing companies from across the country to a 300km road network to test ‘Connected and Automated Mobility’ in the real-world.

Its work has attracted the UK Battery Industrialisation Centre to the region, allowing companies to move to high-volume (Gigafactory) battery manufacturing.

With the recently opened National Automotive Innovation Centre demonstrating the long-term commitment of Jaguar Land Rover and Tata Motors to the region and the announcement of a new dedicated and specialist advanced technology centre for Lotus, the West Midlands has become the best place for developing clean, green, smart transport.

Investment in Merseyside with MTC Liverpool

Continuing a strong partnership with academia in the North West, the MTC has successfully established a base in the heart of Liverpool’s Knowledge Quarter, strategically positioned to mobilise partnerships with regional universities and allow local businesses to test their processes in a de-risked environment.

With support from the Liverpool City Region Combined Authority, the MTC is set to expand its impact in the region, boosting productivity, skills, and job creation.

Opened in November 2019, AMRC Cymru is situated in the Deeside Enterprise Zone in Broughton, and focuses on advanced manufacturing sectors including aerospace, automotive, nuclear and food

AMRC Cymru, a new £20m research and development facility in Broughton, has been described by Welsh government ministers as a ‘game changer’ for the economies of North Wales and the ‘northern powerhouse’.

With Airbus as the first major tenant and much more planned, it is predicted the new facility could increase GVA to the Welsh economy by as much as £4bn over the next 20 years.

Only months after opening its doors, AMRC Cymru started playing an essential role in an unfamiliar game, helping save lives in the fight against COVID-19 as a production facility for thousands of vital medical ventilators, demonstrating the HVM Catapult’s versatility and responsiveness in the face of a global crisis.

*All images courtesy of HVM Catapult