Appetites for free-from, plant-based and organic foods have exploded in recent years and all manner of entrepreneurs and manufacturers are catering to the rising demand. Jonny Williamson reports.

Whether doing your weekly shop or trying to find a snack on the go, you can’t have failed to notice the seismic shift that’s taken place.

From major supermarkets and fast food chains, to boutique delis and online subscription providers, the growth of alternative food produce in recent years has been nothing short of meteoric.

It doesn’t matter which segment you look at (and there’s a wide menu to choose from), all are demonstrating strong, sustained growth and now represent highly lucrative markets.

Fish:  Fresh fish and seafood landed sales worth an estimated £996m in 2019 [Statistia]

Dessert: Over the past five years, the free-from food and drink market has more than doubled in value to reach an estimated £934m in 2019 [Mintel]

*All figures quoted are for the UK market

Sainsbury’s recent Future of Food Report forecasts that a quarter of the British population will be vegetarian in 2025, up from one in eight today, and half of people will identify as ‘flexitarians’ i.e. consuming a largely plant-based with the occasional inclusion of meat, up from a fifth today.

“Sainsbury’s alone has already seen a 24% increase in customers searching for vegan products online, and a 65% increase in sales of plant-based products year-on-year, as customers increasingly consider a vegan, vegetarian or flexitarian lifestyle,” the report states.

Furthermore, while many may see this trend as being driven by young people, evidence suggests otherwise.

“While millennials are one of the key drivers of this global shift away from consuming animal products, the plant-based movement appears to be bigger than any one generation,” notes Michael Pellman Rowland, writing in Forbes.

He adds that: “Celebrities, athletes and even entire companies including Google and countries such as China are backing the movement to eat more plants.”

Giles Quick, Director at consumer insights company Kantar, has commented that: “The vegan market has changed fundamentally in the last six or seven years – it’s now for everyone.

“Social media has brought it to the forefront of customers’ minds, and the mainstream. It’s not seen any more as a choice for life, but as a choice for one meal, one moment, for one or two days a week.”

Such a rapid, dramatic chance proves that it’s never been more important for manufacturers to know what’s happening within their markets and the changing needs of their end-users – especially if they happen to be one or two places removed.

Data from market analyst firm, Mintel, has revealed that the UK is currently the world leader for vegan food launches – almost a quarter of all new UK food products launched last year (23%) were labelled vegan, up 6% on 2018 and more than double that of 2017.

High street chains may have taken many of the headlines (Greggs’ vegan sausage roll, McDonald’s vegan-friendly Happy Meal or Subway’s meatless Meatball Marinara sub), but manufacturers have also been dining out, as these three case studies demonstrate.

Increasingly disenchanted by the lack of healthy snacks on offer for parents and toddlers, Nimisha Raja decided to do something about it.

The Kent entrepreneur sold her coffee shop and house and ploughed all the money into launching Nim’s – the UK’s only brand of air-dried fruit and vegetable crisps.

“Our products should not be confused with dehydrated, vacuum fried, freeze dried or chewy baked fruit,” Nimisha explains. “The range is made up of thin slices of 100% natural fruit and veg crisps that have been air dried to produce a deliciously authentic ‘crunchy taste’ that adds a sense of fun to healthy eating.”

The snacks, manufactured at Nim’s cutting-edge air-drying factory in Sittingbourne, are fat, gluten and dairy free, as well as being vegan, kosher and Halal certified, with more than 80% of the fruit and veg used grown in the UK, much from within 30 miles of the factory.

Capable of producing some 15 million packs a year (around 140,000 tons), Nim’s can be found in more than 1,500 shops nationwide as well as over 20 countries, including Belgium, France and Ukraine.

Since its inception, Nim’s has always prioritised product development, a fact demonstrated by its commitment to invest £100,000 into R&D in this year alone. The rapidly growing business recently launched its first air dried citrus infusion slices for drinks and won its first ever Queen’s Award for Innovation.

“We had targeted doubling our turnover this year after a number of major wins at the tail end of 2019, but, like many in our sector, we are having to adjust to the challenges presented by COVID-19,” comments Nimisha.

“Nim’s has its own production line and a strong supply chain and this – combined with effective social distancing and flexible shift patterns – is really helping us adapt so that we continue to meet orders. I have got to say retailers have been extremely supportive as well.”

“Despite all of the pressures we are facing, we will continue to innovate and bring new products to market. It’s what we do best,” she concludes.

Meadow Foods is the UK’s largest independent dairy and an award-winning supplier of dairy ingredients to several of the country’s leading food manufacturers.

Its four sites in Chester, Peterborough, Holme-on-Spalding and Dolgellau employ almost 450 people and handle in excess of 550 million litres of milk each year, sourced directly from its network of dedicated UK producers.

In January 2020, the business commenced development of a new segregated facility at its Chester site to produce plant-based products.

The £4m investments will see Meadow Foods utilise its expertise to produce a range of plant-based ingredients including milks, creams, yoghurts and custard, with opportunities to add further products in the future including sour creams and soft cheeses.

“This decision is in direct response to consumers who are choosing to make lifestyle changes and purchase new and innovative products, as well as demand from our customers for high-quality, value added plantbased ingredients,” explains Mark Chantler, CEO of Meadow Foods.

The base recipe for the range consists of a bespoke blend of oats and rice that has been in development for more than 12 months and has been specifically created to achieve the right balance across taste and texture.

Production at the new facility is expected to begin towards the end of 2020.

Meadow Foods has a history of making strategic investments and acquisitions that extend its range of products.

In the past 18 months alone, the business has acquired Nimbus Foods, one of Europe’s leading innovators and manufacturers of inclusions, decorations and toppings; certain assets related to the processing of packed milks and creams from Nijjar Dairies Ltd (Freshways); and Wrexham-based Roil Foods, a manufacturer of edible dairybased oils such as concentrated butter and butter ghee.

TAKING THE JUNK OUT OF JUNK FOOD

Chocolate is the most widely consumed sweet treat in the world. Richard Wilkinson and Edward Smith decided to tap into a market forecast to reach $61bn by 2027.

But they didn’t just want to produce delicious chocolate, they also wanted to have a positive impact on the environment and society, and to avoid using the unnecessary ingredients and additives that many other producers rely on (such vegetable fat, preservatives and extra sugar). 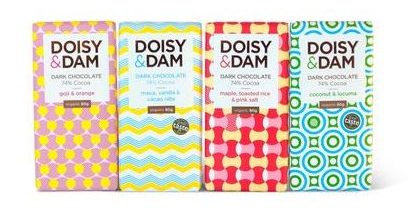 Five years ago, the friends founded ethical confectionary business, Doisy & Dam. As a certified ‘B Corp’, the business is legally required to consider the impact of its decisions on its workers, customers, suppliers, local communities and the environment.

“The best thing about having B Corp certification is that it provides a set of guidelines that means you’re driving positive change for the world,” explains Richard. “What we want to do is make something enjoyable without leaving people with that sense of guilt that what they are consuming is unhealthy.

“In order to do this, our customers need to know that the chocolate has a clean label with no unnecessary ingredients. They also need to know that it’s not doing any harm to the world, the cocoa needs to be produced ethically and not be exploitative.”

Doisy & Dam’s steadily expanding product range contains all-natural ingredients, ethically sourced cocoa, no palm oil, are 100% vegan and can be found in more than 2,500 shops nationwide. It has also experienced an uptick in purchases via its e-commerce platform as a result of the recent lockdown.

The business has also created five initiatives in response to COVID-19, including donating products to frontline workers, the elderly and food banks, as well as creating new letterbox sized packaging so people can more easily send and receive treats through the post.

With Doisy & Dam’s growth rate roughly doubling year-on year, Richard and his team plan to invest in Colombia in the coming years to help the communities who grow its cocoa beans.

The importance of Diversity & Inclusion at Digital Manufacturing Week 2022