How one Midlands firm is revolutionising plastics manufacturing

A revolution in biodegradable plastic technology could transform the way manufacturers handle harmful materials, while having a potentially life-saving impact on marine animals currently under threat from unrecyclable waste.

Plastic technology specialists Aquapak has developed an innovative polymer resin capsule called Hydropol, which unlike other plastic materials used in a variety of industries fully decomposes in water when exposed to certain temperatures, presenting significantly less risk to biological systems.

The  Birmingham-based British Plastics Federation (BPF) member has been in the research and development stage of bringing the Hydropol technology to fruition for the better part of a decade and has recently received hard-won recognition from various industry partners after going into commercial production.

Polymer manufacturer Aquapak produces the raw materials that go into the Hydropol pellets at its Midlands factory, which is then sent off to one of its many industry ‘converters’ to be transformed into anything from packaging materials, to garment and laundry bags, to film reels, and laminating supplies. 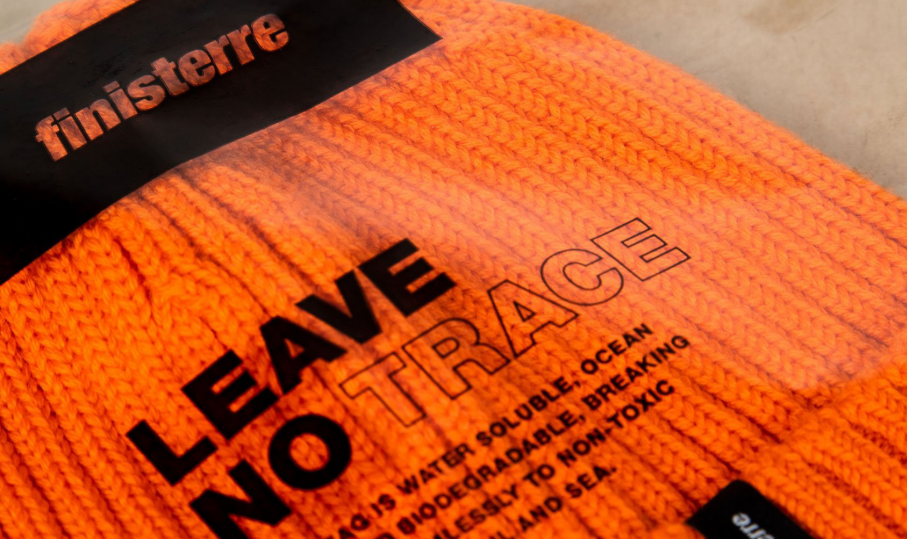 Some of Aquapak’s recent commercial partners include global fashion brand Finisterre, who in December 2019 purchased a consignment of eco-friendly ‘trace bags’ for its garment distribution, and a goods distribution firm based in Australia and New Zealand who opted for Aquapak’s technology to satisfy its hospitality and leisure demand, as opposed to destroying items like laundry bags through incineration.

“It is only in recent years that Aquapak has managed to go mainstream with the Hydropol pellets and is now seeing many high-end brands also using the formulation,” said an Aquapak spokesperson.

“Now that the formulation process has been tried and tested and certified with an end-of-life guarantee by the British Plastics Federation, we’ve been able to roll-out the technology with more confidence,” they added.

Hydropol has been formulated rendering Polyvinyl alcohol (PVOH) into a standard plastic pellet with a high hydrolysis level (a reaction that occurs between Ion and water molecules), but which remains stable under normal storage conditions.

PVOH, first manufactured in the 1920s, was largely replaced by more common polyethylene, polypropylene and PET alternatives, because PVOH is traditionally hard to process.

Most PVOH are made with lower hydrolysis levels, typically causing it to degrade in water temperatures of around 30°C.

It is therefore more commonly found in packaging applications where water solubility is critical, such as washing detergent pods – however this manufacturing process is slow and expensive. 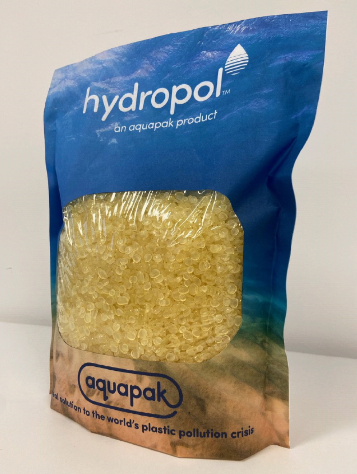 Hydropol can be activated under varying levels of hydrolysis, but is primarily designed for maximum potential in water at controlled temperatures typically between 40 – 70°C.

It can also be co-extruded or laminated onto “traditional plastics, bioplastics or paper, extrusion coated onto film or paper or even injection moulded into a rigid form,” according to Aquapak.

Hydropol is also designed to dissipate electrostatic energy, is naturally UV resistant, and is reportedly three-times stronger than polyethylene.

Aquapak describe its technology as “marine safe and non-toxic” as opposed to merely water soluble. It’s currently available in two forms – a warm water soluble and a hot water variation. A cold water soluble is currently in the test phase.

The warm water variation dissolves in temperatures above 40°C, while the hot water soluble disappears in water temperatures exceeding 60°C. 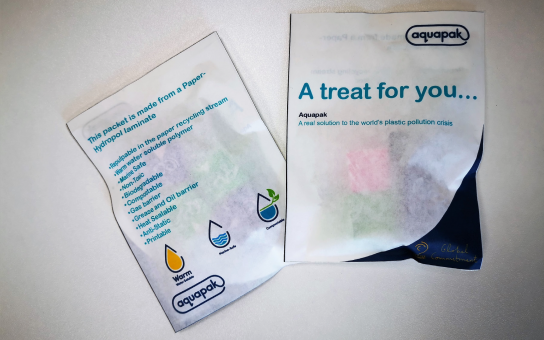 Alongside solubility, the Aquapak technology is “fully recyclable and pulpable”, meaning materials used in packaging or lamination can ultimately be dissolved in waste streams and used again via recycling and refining methods.

“Another use we are poised to launch in this technology is food waste bags,” said Aquapak. “Anaerobic digestion bags are also something we are experimenting with.

“Pretty soon responsible food waste will become compulsory under the law and that move will be compatible for anaerobic digestion and composting for biogases and fertilisers. That is something we do have the certification for already,” it added.

Aquapak relies on a number of converters across the UK to employ high-end thermo-processing techniques to transform the Hydropol polymer pellets into a variety of material uses, depending on the industry’s demand.

Some of Aquapak’s industry partners are seeing their products exported to all areas of the world economy, including Finisterre who have reach in Europe, the US, and in Asia.

“The unique selling point of the Hydropol technology really is its biodegradability,” said Aquapak. “It really does just dissolve into the waste stream or water system.”

“Its end-of-life feature is key when compared to other single-use plastics. If our product was to ever enter the water systems and ultimately the oceans, it would gradually break down which is ultimately safe for the environment,” it added.

Speaking about the future of Hydropol technology, the company said it was ready to scale-up its operation feeling confident it had reached the end of its R&D process. However, it did have some notion of other areas for expansion owing to the development of a serious viral breakout.

“With the emergence of coronavirus, Hydropol could be a really innovative solution,” said Aquapak.

“The packaging we can offer, the laundry bags for instance, is potentially ground-breaking in helping to contain the spread of germs. We’re hoping that with greater exposure we can be of service to this global effort,” the company added.

The company also said it was poised to launch new products in other sectors currently using non-degradeable plastic materials, such as pet food packaging.

Aquapak is also looking to the UK government for support of its technology and CEO Mark Lapping will be working alongside BPF and Whitehall to create more awareness about how Hydropol could play a critical role in tackling climate change, cleaning up the world’s oceans and reinforcing a circular economy.

*All images courtesy of Aquapak

Scientists present new insights into the 3D printing of metals