How UK aerospace can help the country to fly

The UK’s aerospace industry is a success story to be celebrated, argues Santander’s Paul Brooks, as new research underlines its potential to thrive in the post-Brexit world.

Who says the UK’s manufacturing sector is in decline? With global manufacturing activity increasing once again, and the depreciation in the value of the pound making UK exporters more competitive in the international supply chain, this is a sector performing strongly.

In particular, the UK’s aerospace industry is soaring, as revealed by new research conducted by Santander and EEF.

The UK is home to leading original equipment manufacturers (OEMs) such as BAE Systems and Leonardo at the top of the supply chain; high-profile Tier 1 manufacturers such as Airbus, Rolls-Royce and GKN, which supply final parts and large assemblies; and numerous Tier 2 manufacturers that produce a broad range of components.

Many of these businesses are growing rapidly. While it’s true that some areas of manufacturing have slipped back in recent decades, our research with EEF shows the aerospace industry’s output has increased by 73% since 1990.

By 2015, sales had reached £30bn, up 40% on 2009, while the number of businesses in the sector almost quadrupled, to around 2,400. As a result, the UK’s aerospace sector is the largest in Europe and second only to the US globally.

However, it is the nature and profile of the aerospace industry that really makes it exciting. For one thing, it’s an export champion, with overseas sales rising dramatically in recent times. 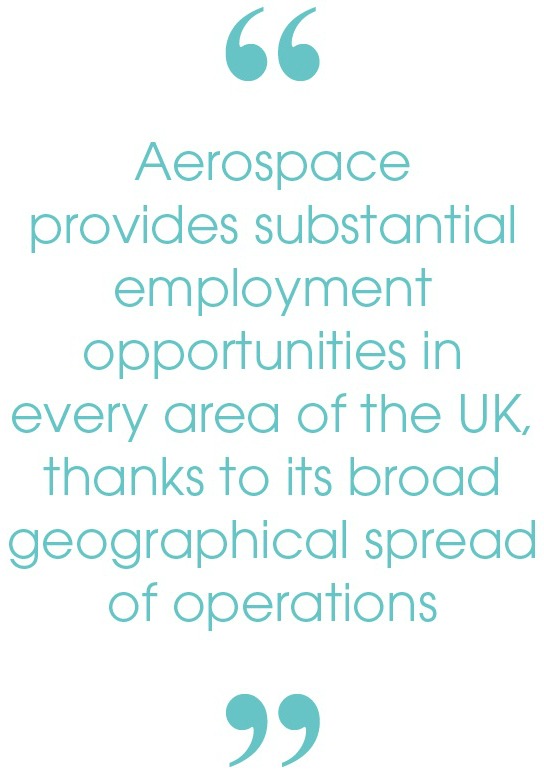 Crucially, those sales are being made in a diverse range of markets. In the context of the UK’s plans to leave the European Union, it’s significant that only two EU member states, Germany and France, are among the top 10 customers for the UK aerospace industry, albeit at second and third place respectively.

The US leads the way, with Middle Eastern countries, including the UAE and Saudi Arabia also placing significant orders, alongside nations as far-flung as Singapore and Canada. That diversity is set to continue.

Orders from countries including Morocco, Iceland and South Korea have all leapt over the past six years; and just three of the fastest-growing markets for UK aerospace companies, the Netherlands, Spain and Germany, are in the EU.

Another huge positive is the extent to which aerospace provides substantial employment opportunities in every area of the UK, thanks to its broad geographical spread of operations.

The South West of England is home to Tier 1 suppliers, ranging from Rolls-Royce to GKN; Wales boasts 6,000 jobs at Airbus’s plant in Broughton; while Bombardier employs 6,000 people in Northern Ireland. In every region of the country, aerospace employs thousands.

A focus on innovation

This is also a sector committed to R&D, with a series of significant advances made over the past decade and further innovation continuing all the time. Take manufacturing, for example, with technologies such as 3D printing. While in the end-product, the internet of things (IoT), connectivity and big data are all powerful themes. Aerospace made £1.7bn worth of R&D investments in 2015, accounting for 12% of all the UK’s manufacturing R&D.

In other words, the UK’s aerospace industry has evolved into a cutting-edge technological leader with customers in every corner of the globe. Santander and EEF’s research suggests it can make even further progress in the years ahead, achieving further export success and sustaining increased employment across the country.

This is not to suggest the sector does not face risks. There’s no doubt, for example, that Brexit poses some uncertainties – particularly around where the next generation of aircraft will be produced and the extent to which the UK industry will be able to source highly skilled labour.

A related danger is the possibility of a return to protectionism – if the EU chooses to exploit Brexit to support its own industries, for example, or if the Trump administration in the US follows through on threats to drive a harder bargain on international trade.

Risks and opportunities ahead

Economic factors such as rising energy prices and the depreciation in sterling also raise a threat, as they impact on manufacturers’ input costs. Some analysts also worry that the industry is not sufficiently diverse, which could prove problematic if OEMs move towards meeting more of their supply chain needs from fewer suppliers. (Some have already begun to do so.)

Then there are emerging risks. Cyber security, in particular, poses a threat to the UK’s very significant space manufacturing sector, where the satellite industry is integral – sitting at the heart of civil and defence infrastructure, satellites are obvious targets for cyber-attackers.

Against these risks, however, there are exciting opportunities ahead. Globalisation, including the growth of emerging markets where the numbers flying are increasing all the time, can support rising demand for aerospace sector products.

IATA predicts that China will be the world’s largest aviation market by 2024. UK airlines, meanwhile, are poised to see rapidly-growing passenger numbers and are also investing in safer, cleaner and more comfortable planes, as well as emerging trends such as connectivity.

In the longer term, the industry is beginning to get to grips with trends such as the shift to alternative fuels and the emergence of space tourism as a viable commercial activity. Manufacturing methods and processes are also changing, with greater use of composite materials, interest in 3D printing and moves towards even greater automation.

UK businesses are in a strong position to capitalise on all these ideas, but they will need support to make the most of the opportunities that lie ahead – strong funding so that they have the capital required to invest, expert advice and assistance with business growth, and help with building and expanding their networks around the world.

At Santander, we’re excited about what the UK aerospace industry can achieve over the next decade – and we are ready to play our part.