Ian Callum: In conversation with an automotive design legend

From humble Scottish roots, Ian Callum has impacted a global industry, re-imagined the Jaguar brand and along the way created icons many of us lust to own or drive. Paul Stead was privileged to spend 90 minutes with the - until very recently - director of design at Jaguar’s HQ in Coventry.

Like many, I love the Aston Martin DB7, the Vanquish, the Jaguar F-TYPE, F-PACE and more recently the I-PACE, the 2019 World Car of the Year. However, while I wanted to understand more about how these vehicles were conceived, refined and productionised, what I really wanted to discover was what drives Ian Callum, his passion for design, his design philosophy, and how the industry has evolved to embrace design to commercial advantage.

With this in mind, my first question had to be to understand a little more about Ian, how he became a designer and honed his skills to create some remarkable icons.

“I decided at a very young age I wanted to be a car designer,” comments Ian, “my mother’s cousin taught me to draw wheels in 3D which was such a liberating moment. So, by the time I was a teenager I knew what I wanted to do, but it was very difficult to enter the design world as it was just starting to be recognised as a form of education.” 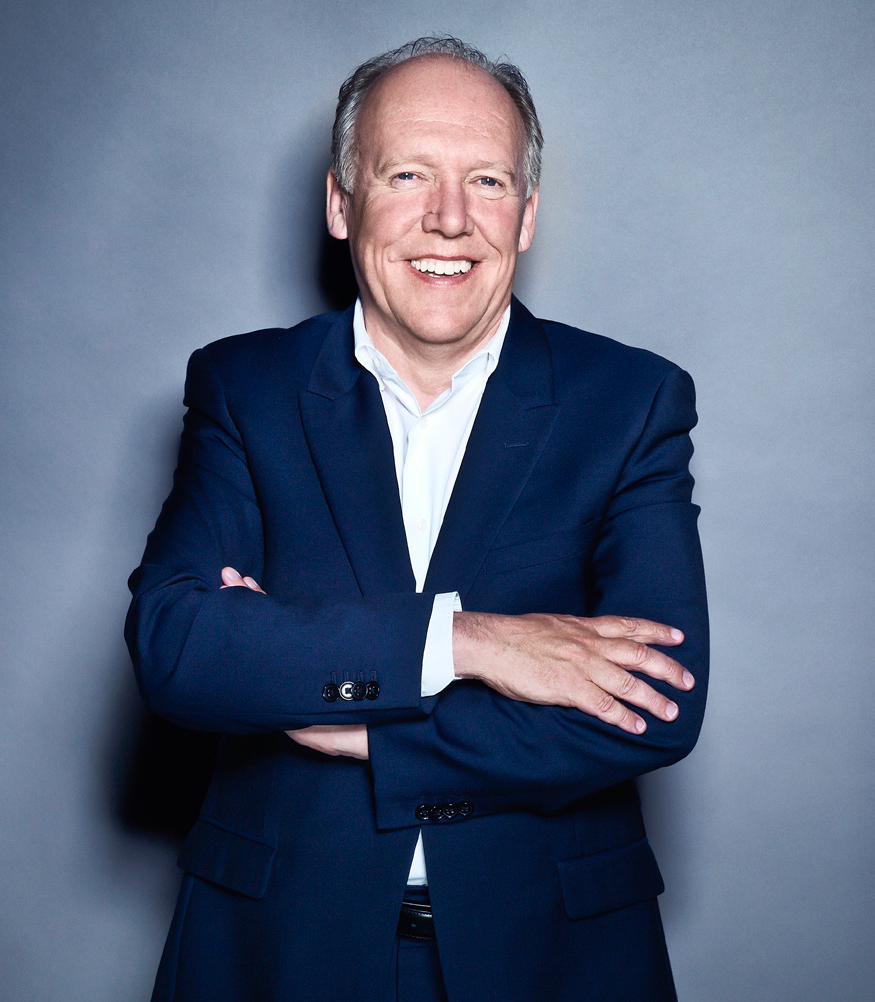 “I was somewhat of a rebel,” he admits, “my father was born in 1911, (my mum was much younger) and I was growing up in the ’60s in a conservative post-war household still anchored in the ’50s, when all around fashion, music and culture was changing rapidly. I eventually spent seven years ‘riding the wave’ at different colleges studying design and sometimes struggling against the status quo to find the right path.”

“What I now also realise, is this amazing investment in design and creative education in the ’70s really put the UK in the design leadership position we see today (with many global design studios run by Brits). The question now, is what will happen in the future as China and Korea are taking the lead? ”

You left the Royal College of Art and went to work for Ford?

“Yes,” laughs Ian, “but I also had an interview with Wayne Cherry at Vauxhall, and clearly I wasn’t good enough!”

“So yes, Ford gave me a great apprenticeship, and it also understood the cost and the value of everything we were designing, so we re-styled many of the basic platforms, as well as the interiors and the ergonomics. In fact, I also designed more steering wheels than anyone I know. You probably don’t know but I designed the wheel for the Sierra, the Transit van, and the first European air bag steering wheel for the Granada.”

“But I also challenged the status quo within Ford and pushed boundaries, so consequently it also used to let me travel around the world to the various studios. Given these experiences, I was eventually promoted to Ghia Design Manager in Turin, (with a company car) and was responsible for the Via, Zig and Zag concept cars.”

Why did the car industry embrace and respect design as a critical discipline?

“The importance of design was first demonstrated in the US automotive industry back in the 1950s/60s in the marketing campaigns designed to capture the public’s imagination. Every year a new model would be launched, the new 57 Chevy replacing the 56 Chevy, driving both sales and obsolescence, and ensured the car became a catwalk fashion item.”

“So while engineering was important, the basic platforms would remain largely unchanged and the styling, the colours, the fabrics and the interiors would change far quicker than they can today.”

“Clearly this wasn’t cost sustainable, and in the ’70s this changed, although it ensured designers became highly respected and critically important in the DNA of the industry.”

You left Ford in 1990 to join Peter Stevens and Tom Walkinshaw to form TWR Design. Why?

“There were many reasons for leaving Ford,” acknowledged Ian. “From constantly travelling backwards and forwards to the UK (did you know you can drive from Turin to London in 12 hours?), to doubling my pay, to running my own studio, to having greater creative freedom. It was the right time to leave.”

“However, it was also a shock to be working in a little shed in Kidlington, after being part of a massive corporation, but I was happy as could be, doing something I wanted to do.”

“TWR was a shop window, for Tom [Walkinsha, founder of TWR] . He was a brilliant racing driver and salesman, so we’d undertake design studies for clients to provoke them into developing new models. One such study was done for Jaguar using a standard platform. However, when this fell through we re-imagined the design for the Aston Martin DB7 and after nearly three years of hard work, the rest is history.”

“What many don’t appreciate is that I crafted and re-crafted, the concept sketches and worked with the clay modelling team, to ensure every detail, every angle was perfect. There were many challenges along the way, I recall the change that Walter Hayes made from a V12 to a straight-six engine (as it was taller & cheaper). However, when we showed the revised design to Tom, we both agreed we didn’t like it, so we walked into engineering and told them to lower the engine mounts by 20mm.”

“This was clearly one of many changes, but having support from Tom was critical. He gave me the respect and authority to make such changes. But it also illustrates that as a designer you need to understand how a car is put together, and you need to know the politics within the business, so you can work with them to get things done.”

“Yes, it was a big step to move from a small corporate business back into the Ford Premier Automotive Group with my old buddies. I’d left on great terms, but here’s a top tip: watch what you say when you leave a business as you never know what the future holds!”

“I had a huge motivation to turn Jaguar into the business I remembered it to be during the ’60s – dynamic, cool, youthful. Rather than, as it had turned into, a conservative old man’s car that had not changed in 30 years.

I was actually brought in by J Mays to his credit, and along with Gerry McGovern (chief design officer, Land Rover) we were eventually elevated to a position on the board, working directly for the CEO Dr Ralf Speth who really understands the power of design.”

You’ve been here now for 19 years and I know it’s an unfair question, but what’s your favourite car?

“My favourite car of all time has to be the Ferrari 250 GT SWB, and I was lucky to Drive Rob Walker’s Stirling Moss No 7 car in the West of Scotland,” beams Ian.

And your favourite Jaguar?

“That’s a tough one, clearly the F-TYPE, the F-PACE and the first XF really changed the brand, but the seminal car, the one we produced from the ground up, is the I-Pace. We decided as a board we needed an all-electric platform, and in typical British fashion we assumed that the ‘Big Three’ were ahead of us! So, for the first time, we had a blank sheet of paper – literally!”

“The wheelbase was set up by the range and therefore battery size needed for a 4/5 seater SUV, however, we had the flexibility to bring the cab forward (as had happened in the mid-engine Via), and start to re-write the rules, and that’s exactly what we did.”

If you’re interested in the design philosophy brought to life, I suggest you watch this short video.

What about the C-X75 concept car?

“I thought you asked about production cars,” laughs Ian, “that one never went into production, we only ever produced five prototypes.” But it’s a seminal car, I reply, one that set up the design language for what we see now!

“Yes,” sighs Ian, “and we really should have built it, but the market wasn’t right at the time. It was a £1m super car, and as a mass production company such small volume was challenging: our infrastucture is set up to build 600,000 units a year.

However, as you’d expect grins Ian, “I’m challenging the status quo every day. That’s what designers do!”

On the point of challenging, what qualities do you believe are critical in the design function?

“As a designer, I’m not there to speak to the customer, so the product has to do this for itself, so my role is to act as a translator to create and deliver the passion, the brand, the promise, and the desire.”

“I still sketch almost every day, and as head of design, I’ve surrounded myself with a great team, who likewise challenge me and each other but do so with great respect.”

“We have to be utterly disciplined, and ruthless so everyone knows what’s not good enough. However, at the end of the day, it’s ultimately my responsibility, so it’s not hugely democratic!”

Finally a BIG question. What about the future of personal transport, especially changing ownership habits given the growth of megacities?

“There’s always going to be a place for premium and ownership in automotive,” laughs Ian. “I don’t know about you, but I’ll only lend my cars to a very, very few people, and even then I’m always nervous about getting the alloys scuffed! It’s probably like lending a favourite pair of trainers, some things are just too precious!”

While I’m sure a number of businesses can argue that emotion doesn’t play any part in the specification, sale or adoption of their products or services, this is the polar opposite in the automotive market. The product we currently call a car – love it or hate it – is here to stay for the foreseeable future and the role of the designer has never been greater as we move into a world of electric vehicles, autonomous driving, and on-demand, data-driven services.

Ian Callum is clearly a grandmaster of his trade, has honed his and his team’s skills to deliver outstanding iconic products. His passion, drive and commitment cannot be faulted.

I urge anyone interested in recalibrating their business to consider how design in its broadest sense can impact future customer relationships.

Remember that brands are built in the mind; often crafted by talented creatives. Products are built in a factory; often brought to life by talented engineers. Teamed together with management and financial structures, they often change the world.

Ian Callum left JLR at the end of June. He has also been awarded a CBE for his contributions to the automotive industry. We would like to add our congratulations for this well-deserved recognition of Ian’s distinguished career.

To find out how Design Tools + Thinking can help your business grow, contact The Brewery Group today: