Posted on 1 Dec 2015 by Jonny Williamson

Manufacturers have strongly criticised the closure of the Business Growth Service, announced as part of the Chancellor’s 17% spending cut for the Department of Business, Innovation and Skills (BIS).

Including the respected Manufacturing Advisory Service (MAS) and the Growth Accelerator programme, the Business Growth Service (BGS) has successfully supported more than 28,000 small and medium-sized business across England since 2012. 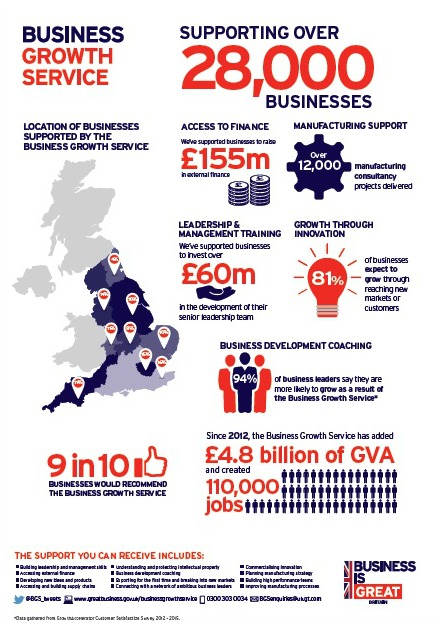 As a direct result of this support, the SMEs have experienced growth four times faster than their counterparts, adding £4.8bn of gross value add to the UK economy and creating 110,000 jobs – the equivalent of 6% of all jobs created during the last parliament.

A statement on the BGS website reads: “As part of the Spending Review settlement, the Government has decided to wind down the national delivery of the Business Growth Service.

The service closed to new applicants from Monday November 30 at 23:59; however all contractual commitments will be honoured as long as “all support and related activity” is completed by March 31, 2016.

According to BIS: “This decision does not in any way reflect concerns about the performance, quality and value of the service.

“It is one of the decisions that the Department has taken to generate the rapid savings required by its Spending Review settlement.”

Nine out of 10 recipients of support say they would recommend the Business Growth Service, and 94% of business leaders say their business is more likely to grow as a result of the support they received.

Sources close to The Manufacturer have said that 60 dedicated front-line manufacturing advisers would be made redundant, with the severance packages expected to be footed by BIS.

Delivering his Spending Review and Autumn Statement to the House of Commons on November 25, Chancellor George Osborne noted that the budget for BIS would be reduced by 17%.

However, he made no specific indications that the BGS would be culled or that jobs were at risk, leaving staff reportedly feeling shocked upon hearing the announcement.

Chairman of Shropshire-based Advanced Chemical Etching, Alan Rollason noted that the Chancellor’s decision showed the Government understood “nothing about the day-to-day struggles of running a small business.”

He added: “I know many businesses around the Midlands that have benefitted from the help and support of MAS, and who would not have survived or developed in the same way.

“It is just another kick in the teeth for manufacturing from a Government that has no idea of manufacturing’s contribution to our country’s wellbeing, both in terms of wealth creation and the jobs it creates.”

Chairman of the Black Country’s Kimber Drop Forgings, Larry Joyce commended the work of MAS, describing its advisors as being “pro-active” and having the right contacts “to make things happen”.

Joyce added: “[Its closure] is a terrible indictment of the Government that they are risking the regeneration of industry, which is still in its infancy.”

The closure of BGS is expected to deliver annual savings of £84m.

BIS told The Manufacturer that the Government is investing in 39 Growth Hubs, giving them ownership of how they support local business to start-up and expand.

Referring to the closure, Small Business Minister, Anna Soubry commented: “The most important way we can help small businesses is to continue to secure a strong, growing economy and that’s exactly what this Government is doing.

“We’ll keep cutting red tape and have extended small business rate relief for an extra year, freeing up small firms to do what they do best.”

Soubry continued: “Where taxpayers’ money is used to provide support, this is best done at the local level which is why we’re providing further funding to Growth Hubs and away from Whitehall.”

Made Smarter urges manufacturers to turn pain into empowerment