Jim McColl: success on the Clyde

MV Catriona was delivered to its new owners Clyde Maritime Assets by Ferguson Marine Engineering Ltd six weeks ahead of schedule in late September this year.

Behind that bald statement of fact lies a story of faith, commitment and technology, and the salvation of shipbuilding on the Clyde, accustomed over the decades to contracts and jobs going to overseas yards.

The Ferguson yard was the last non-naval yard to go (BAE Systems has two yards operating at Govan and Scotstoun). Ferguson actually closed in 2014, but was bought out of bankruptcy by Clyde Blowers Capital, the vehicle built by Jim McColl over the past 20 years to invest in manufacturing and technology across the world. It lifted the Ferguson workforce out of despair and back into a job.

“They’d already been paid off, so they didn’t have a job,” McColl told TM. “We essentially set up a new company and re-employed, so they were very supportive and onside right from the get go. It enabled us to use their skills and talents, probably the most important ingredient in the yard.”

The £12.3m vessel is a further investment by the Scottish Government in Clyde Maritime Assets Ltd.’s Clyde and Hebrides Ferry Service fleet and will be operated by CalMac Ferries Ltd. This is the first ship built by Ferguson Marine Engineering Ltd (FMEL), following its purchase of the Ferguson Shipbuilders business. The previous two hybrid vessels were also built in the same yard.

All three hybrid ferries – MV HALLAIG, MV LOCHINVAR and MV CATRIONA – are designed for use on short crossing routes around the Clyde and Hebrides. Their low-carbon hybrid system is leading to a reduction in fossil fuel consumption and carbon emissions and is reducing fuel consumption by up to 38% compared to a conventionally powered vessel of the same size.

The reduction of fuel consumption will result in a decrease in CO2 emissions in excess of 5,500 tonnes per vessel over their lifetime.

Crucial to the revival of the Ferguson yard was winning the £12.3m contract to build the third of a new breed of hybrid-fuel ferries for Clyde Maritime Assets Ltd. (See breakout box) And it would not have happened without the faith of McColl and his team that ships can be built profitably in the UK.

“The biggest single factor is the investment we’ve made in the yard, making it fit for purpose,” he said, “bringing it up to date, introducing modern manufacturing techniques… that’s been the biggest change we’ve made.”

But even that would be nothing, he said, without the workforce. “You can invest in new sheds and modern equipment, but it’s people that make it happen.”

The Catriona was just the start for the new-look Ferguson Marine Engineering Ltd. I asked McColl whether he had ambitions to build larger, ocean-going ships. “Yes, but not as big as the very large ships they do in South Korea or China, we wouldn’t be interested in that,” he replied.

“It’s very competitive at that end of the market, but with the investment we’ve made at Ferguson, we will be building bigger ships – ocean-going vessels. We’ve had enquiries about building small cruise ships that are more upmarket than the large ones you see going about. Also, we’ve been asked about conversions of oil service vessels into shadow yachts for superyacht owners.”

(According to the Financial Times’ How to spend it feature, “Shadow yachts are the latest thing. When your superyacht is too small, you are no longer expected to buy a bigger one. Instead, you just get another one. Your second yacht carries all the toys and tenders, helicopters and submarines, extra staff and spare crew that clutter up the mother ship and get in the way of the guests.”) 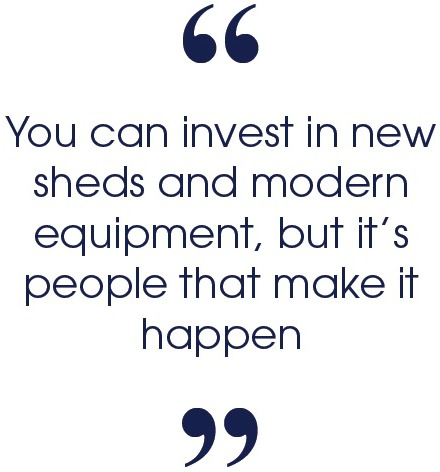 “So there’s quite a bit of opportunity and market demand for the kind of things we can do there,” McColl added. “That was really why we saw a future for the yard and there’s no reason why we can’t do it successfully in the UK, other than this whole issue of bonds and support for this kind of industry. We need to get that in place, that’s for sure!”

Cue a conversation on the issue that more than anything, he believes, is holding back heavy engineering in the UK.

Whenever a shipyard wins a contract to build a ship, it must offer the purchaser a cash-back guarantee so that if the yard goes under, the purchaser gets its money back. It is a huge amount of money for a shipyard to commit to – effectively placing a large proportion of the contract price in bank escrow for the duration of the contract – and that is why he said the UK government must step in to put up those guarantees itself, freeing up yards to take on more work and stay in business.

So is he asking for some kind of special treatment? Far from it. “In the UK we’re at a disadvantage over every other shipbuilding and heavy engineering nation,” he said, “because their governments provide government-backed guarantees, so we’re not on a level playing field.

“If we’re competing with Polish shipyards and Germany shipyards, they have a scheme in place, as do most European shipyards. Those outside Europe have also got government-backed facilities to support them, including bonds and working capital loans. And they do that because they want to support industry. We do not have any such support in the UK, and it stands out.

This is mission-critical for McColl. He has made his case to the Scottish government and is about to lobby the new May government in London. “This is such a key part of an industrial strategy to have support in place” he said, growing increasingly passionate.

“The typical answer you get back is that it is state aid (illegal under EU law). It’s not state aid. The Finns do it, the Germans do it, the Italians do it, the French do it and it’s all approved by Europe! We’re in the position now where we’re planning to get out of Europe, so it should make that easier, but it’s fairly straightforward to do even within Europe, yet we haven’t done it!” 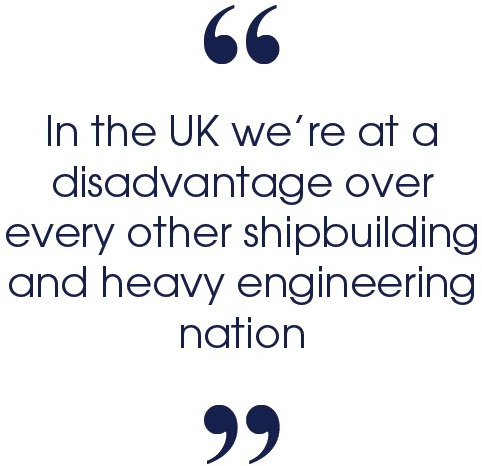 Having raised the issue of Brexit, I asked McColl where he stood on the issue. After all, I suggested, his company’s policy of ‘Be Bold, Think Global’ does sound like a post-Brexit rallying cry.

“That’s been our view since we started, long before any Brexit vote. My view is, the decision’s been made – we just have to do what we can to make a success of it, and I don’t think there’s any reason why we can’t be successful. There’s a whole world market out there and lots of opportunity.”

But would he back a hard Brexit or does he want a variation of our existing relationship?

“Of course we need to have a market relationship with EU countries and I have no doubt that will be in place,” he said.

“I don’t know what the quid pro quo for that is going to be, but I don’t think there’s going to be any major issue that’s going to close off markets in Europe for the UK, it would be silly to think that way. We’re going to get some sort of settlement and of course we want the best settlement we can get.”

It’s confident stuff – no one could ever accuse McColl of lacking confidence in himself or his team at Clyde Blowers Capital – and it is fair to suggest UK plc and the UK government would be well advised to listen and learn from his views on business in the 21st century.

“When it comes to new investments, there are three criteria we look at – we’re looking for engineering products that are mission critical, a good after-market or service opportunity once we get them, and the third one is the ability to globalise the business,” he said.

“That’s been a weakness in the UK in the past. You can’t base all your activity in the UK and service the world anymore. It’s the old British Empire model and it’s dead and it’s been dead for a long time and perhaps it’s that kind of thinking that has held the UK back. You need to globalise your business now to maximise your opportunity.”

He doesn’t place all the blame for that on business, and he certainly does not agree with the Liam Fox belief that British businesses are fat and lazy. Rather, he believes it is a lack of boldness and vision on part of governments that holds Britain back.

“We haven’t had an industrial policy for a long time, and it’s badly needed,” he said. “If there was a very clear policy maybe the politicians would act differently. But we haven’t had one, we’ve relied on finance, the City of London, and property driving our economy, and that’s not good enough.”