The transfer of decision making and funding from central government to local areas in England has been a long-held political aspiration, but one that has long been stuck on the drawing board. EEF CEO, Terry Scuoler explains.

There is, however, now a new momentum behind the principle of devolution. With strong political backing we are now moving quickly towards new governance arrangements across England which will soon come with their own tailor-made arrangements.

This will inevitably lead to a new face of accountability for local areas. The process of devolution, however, must not lose sight of the ultimate outcomes of stronger local economies through better regional growth leading to higher productivity and more – and better – jobs.

These outcomes will be enabled by decisions made by officials within local authorities, but ultimately they can only be delivered by businesses.

Businesses want to help shape local policy decisions. Historically, however, the relationships between local decision makers and the private sector have been weak with a belief among business that it is more about power than growth.

For many, relationships have been purely transactional on issues such as planning and, as businesses watch devolution unfold from afar, they have not been wholly sold on the potential benefits that this process could bring, fearing that it may result in duplication, additional bureaucracy and cost.

Central to the success of devolution will need to be early action to repair the weak relationship between local authorities and businesses. This will ensure confidence in the delivery of outcomes for both parties.

An opportunity exists for this relationship to be repaired through devolution deals. As different local economies have differing policy priorities and varying capabilities to deliver change, however, there shouldn’t be a single blueprint for devolution across England.

These deals will be a bottom-up exercise outlining the case for the devolution of greater powers, financial freedoms and policy control to local authorities and away from central government.

They will also set out how local decision makers intend to deliver better outcomes than central government can in the devolved areas.

For this to succeed, businesses must be seen as partners in the negotiation and delivery of devolution deals. 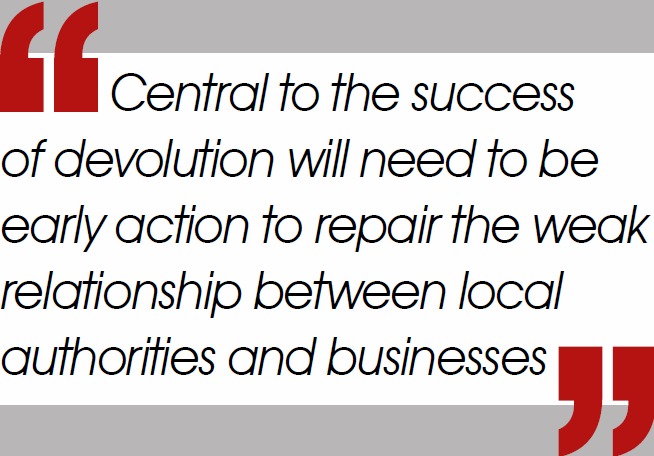 The initial focus for devolution must be on areas where tangible outcomes can be delivered in the near-term, particularly transport infrastructure.

Alongside this, new governance arrangements must have businesses integrated into the framework including establishing an independent business-led overview and scrutiny committee in areas that move towards combined authorities and metro mayors.

As a default, that committee should be the business-led Local Enterprise Partnership, although it is clearly right that individual combined authorities and deal areas should be able to devise their own arrangement.

This is provided that it meets the criterion of being able to authoritatively and effectively articulate the business voice and hold elected mayors and combined authorities to account for their economic decision-making.

The pace of change at local level is set to accelerate and will not be without its pitfalls.

Ultimately, however, it is the private sector that will deliver better regional growth and it must now be at the heart of any future devolution deals.