Posted on 4 Dec 2020 by Jonny Williamson

With more universities and colleges than all other regions combined, easily accessible domestic and international transport links, robust business confidence and serving as a global lighthouse for investment, it’s little wonder London and the South East has such a strong industrial base.

London. A world-leading financial and services hub, second only to New York and closing in fast. The third most visited city by international visitors (just a whisper behind second placed Paris). The UK’s largest regional economy and the UK’s highest GDP per capita, with the South East ranked second for both.

Many of you will be aware of these facts. What might surprise you is that London and the South East is the UK’s largest manufacturing regional economy and the top performer in terms of total industrial activity.

Just 4% of the region’s output is generated by manufacturing, well below the UK regional average of 10%, according to the Make UK/BDO Regional Manufacturing Outlook 2020. However, don’t let the low number fool you, it only serves to illustrate just how strong the region’s financial and service sectors are (88% of output – ONS 2019). 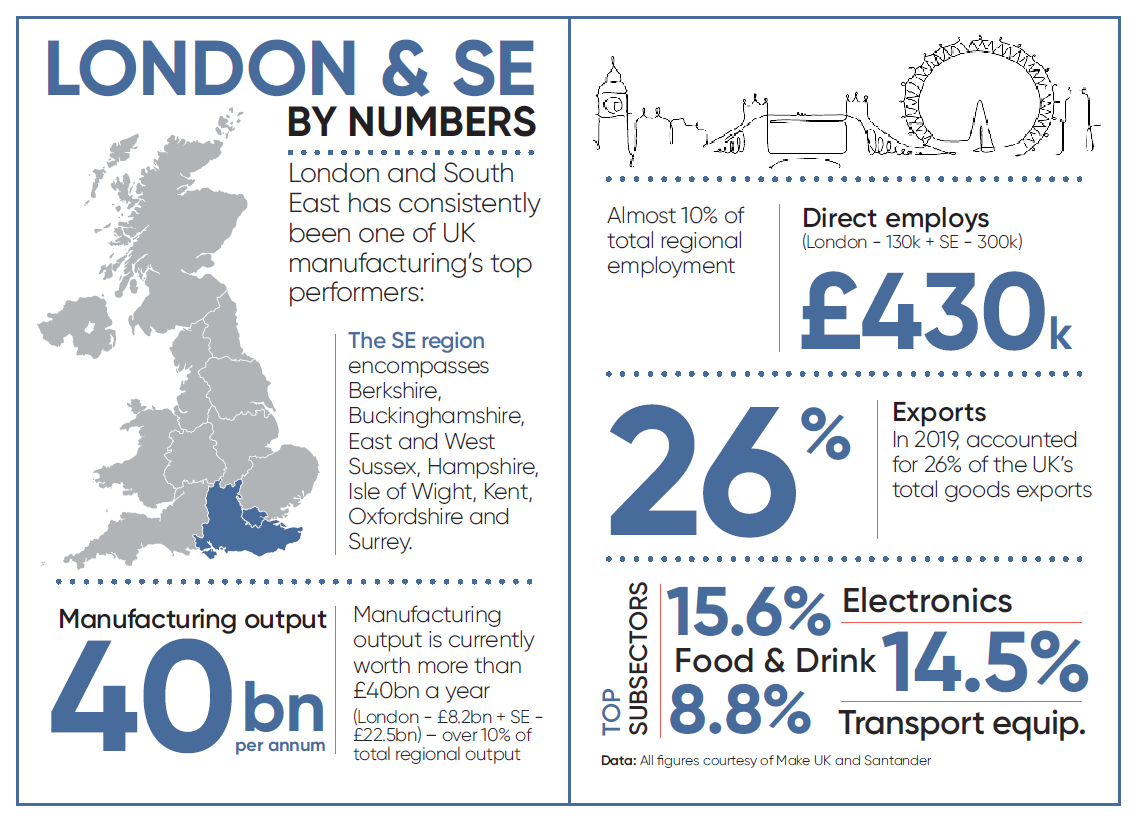 London was a major manufacturing hub for much of the 19th and early 20th centuries, employing 1.5 million workers in 1960. As in other regions, industry has been largely in decline over the past half century, with the loss of shipbuilding, aircraft and most automotive production being acutely felt.

However, what remains are some of the best examples of modern manufacturing not just in the UK, but globally.

Take Ford’s Dagenham Engine Plant, renowned for being at the forefront of engine technology and one of the largest and most advanced automotive factories in the world.

The estate is also home to the Dagenham Diesel Centre, which produces small-capacity diesel engines and was where Ford’s new EcoBlue engine was designed and engineered.

The plant has manufactured more than 10 million vehicles and around 40 million engines since the doors opened in 1931, many of which were exported to markets around the globe. 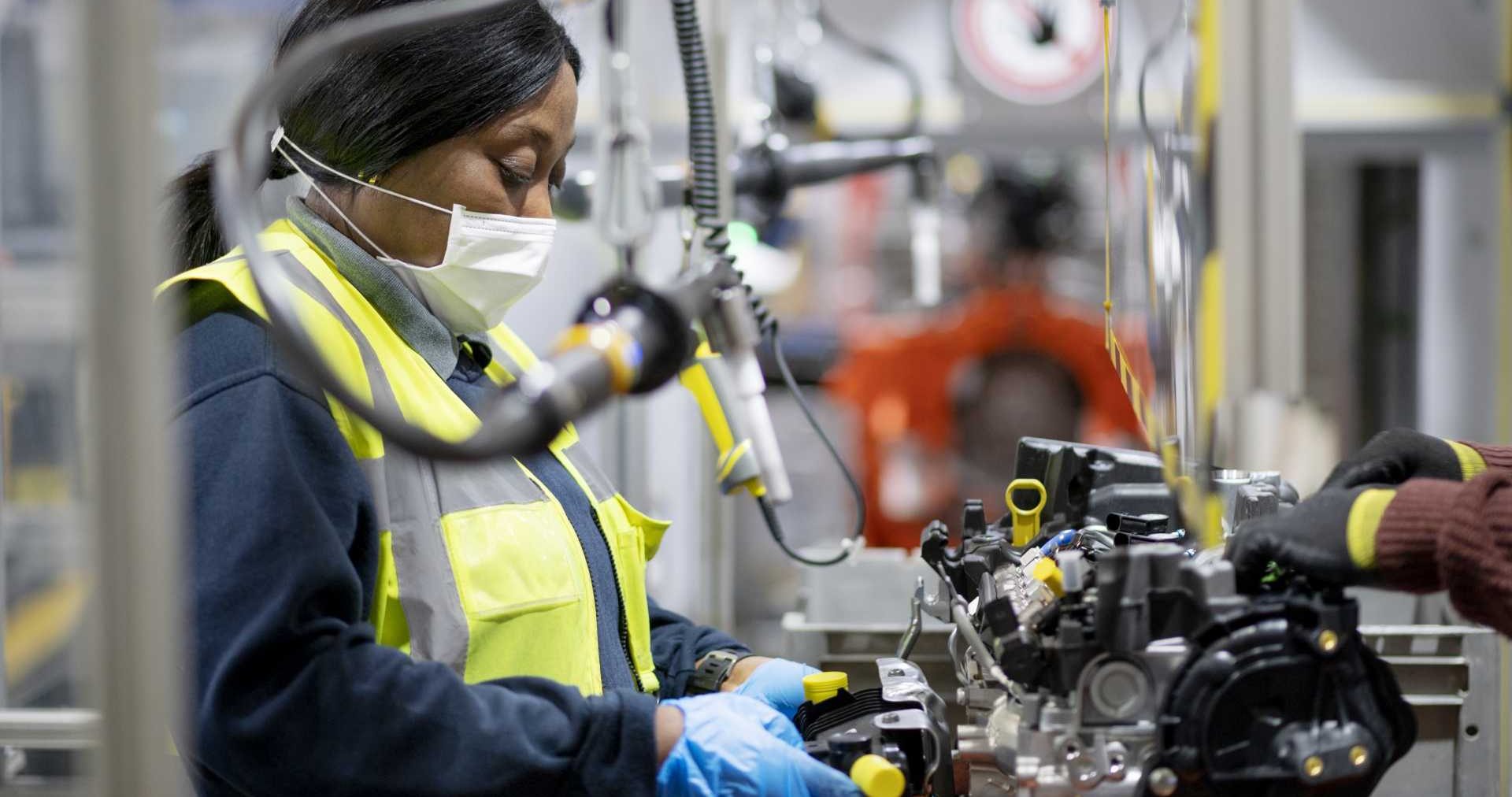 Ford’s Dagenham Engine Plant is one of the most advanced, innovative and sustainable factories in the world. Image: Ford of Britain

Vehicle assembly may have ended in 2002, but with an annual production capacity of 1 million units, the plant is still the largest producer of Ford diesel engines. It is also one of the most innovative, particularly in relation to sustainability.

Dagenham, like every Ford manufacturing facility in Europe, has successfully achieved zero-waste-to landfill status. It has also reduced water and energy consumption per engine produced by more than 50%, with water use per engine among the lowest at any Ford plant worldwide.

A key contributor to this has been the transition to minimum quantity lubrication (MQL) machining tools which replaced high volumes of coolant with fine mists of oil to cool, lubricate and clean during the metal working process.

Production at Dagenham was suspended from late-March to mid-May as a result of COVID 19, with many employees volunteering to support the national effort to produce medical equipment.

Ford was a key member of the VentilatorChallengeUK, the consortium of industrial, technology and engineering businesses from across the aerospace, automotive and medical sectors who collaborated to produce ventilators for the NHS.

An empty warehouse on the site was converted to house a high-tech, ISO9001-accredited production line in just three weeks, a process that would usually take 12 months.

Ford Dagenham is just one of the many manufacturers in the region who turned on a sixpence in light of Coronavirus related disruptions, lockdowns and shutterings. 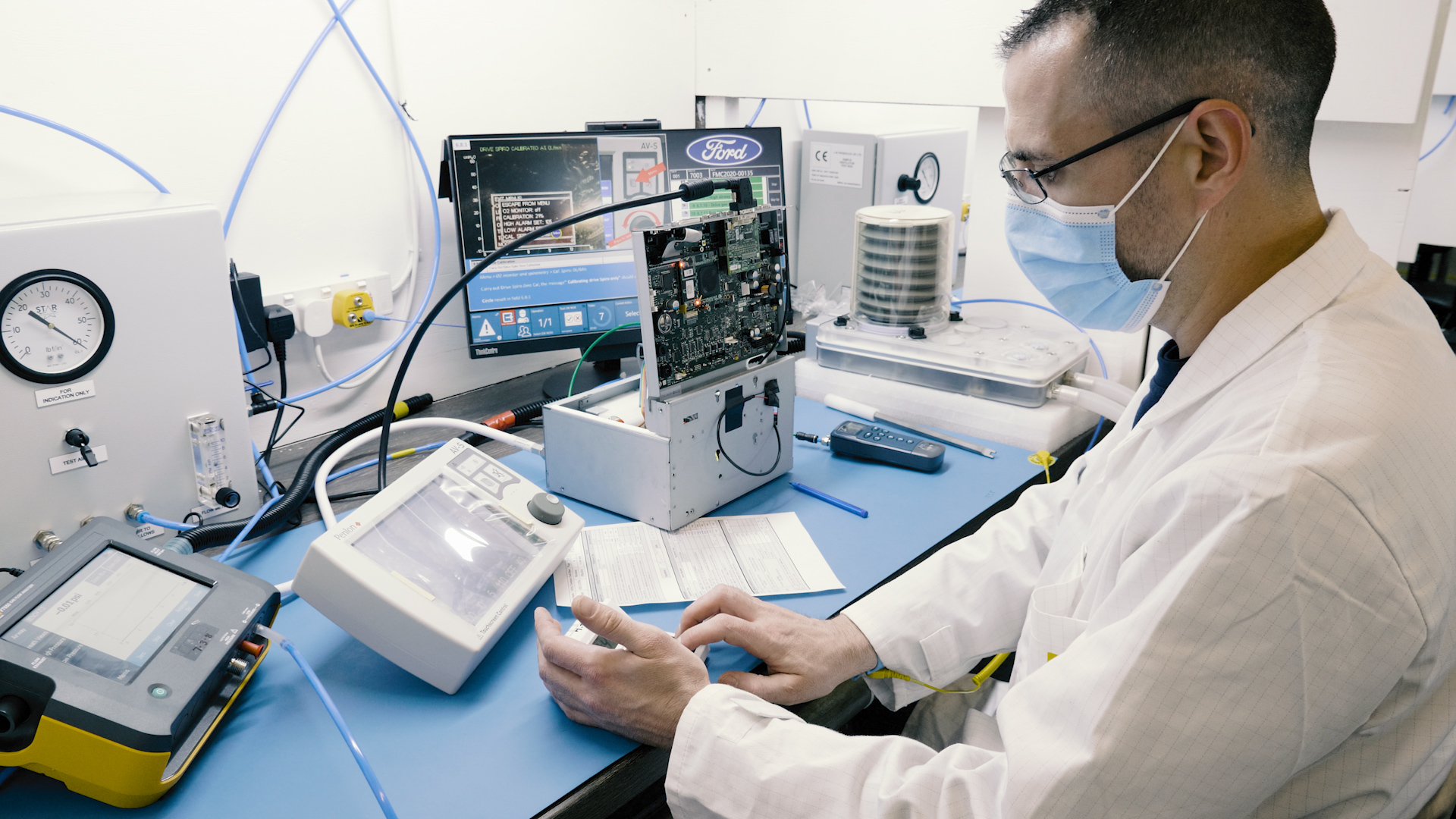 Workers making ventilator sub-assemblies for the NHS after transforming an empty warehouse into a manufacturing facility in record time. Image: Ford of Britain

West Sussex-based Parafix ordinarily produces bespoke adhesive components, including the ones used to hold ventilator components together, but quickly began manufacturing face shields and hit 25,000 a day during the height of the pandemic.

The 30-year-old company set up an assembly line at its Hook facility and hired and trained 70 additional staff to work on the project, with the team completing 10,000 ventilators.

Almost 80 businesses around the UK were highlighted as ‘GREAT Inspirations’, just under half of which were manufacturers including London and the South East’s Brighton Gin, Brompton Bikes, Camden Brewery, Double-Barrelled Brewery and Taxi Spirit Company, alongside STI.

You’ll notice that most of the manufacturers named above are alcohol-related and that’s not surprising given the region’s thriving community of winemakers, brewers and distillers, many of which tapped into skyrocketing demand for hand sanitiser.

There are 46 vineyards in Kent alone, including several of the UK’s leading winemakers – Chapel Down, Gusbourne and Hush Heath, as well as prestigious French producer Taittinger.

Faversham in Kent is also home to Britain’s oldest brewery, Shepherd Neame, which produces the iconic Bishops Finger and Spitfire ales, among many others. Beer has been brewed on the site for centuries and today the brewery produces more than 60 million pints a year, exports to more than 35 countries and operates over 350 pubs across the region.

In the early 18th century, the ‘gin craze’ took hold in London. Local water wasn’t safe to drink, and the city took advantage of the spices and citrus fruits continually arriving by ship from all over the world.

To control rising drunkenness and crime, the government passed the Gin Act in 1751 which required distillers to hold licenses to produce gin. The spirit quickly became too expensive for ordinary people and the boom ended.

For nearly 200 years there wasn’t a single gin distillery in the City. That is until the City of London Distillery opened in 2012, staying true to tradition by producing batches in copper pots that are hand assembled in the basement.

Today, we are going through another gin craze, with UK gin sales hitting a record 83 million bottles in 2019, worth £2.6bn – almost double that of 2017. A further £672m was exported, taking total sales to more than £3.2bn, according to the Wine and Spirit Trade Association (WSTA).

Despite (or maybe because of?) lockdown, gin has been the best-selling spirit for UK online shoppers since March.

London is again helping to fuel this ‘ginaissance’ with more distillers than any other region in the UK and more than the whole of England in 2010.

However, the region’s largest manufacturing sector is electronics. The sector is experiencing a period of growth, rising from 9.9% of manufacturing output in 2017 to 15.6% today. The same is true at a national level, having accounted for 5% of total UK manufacturing GVA in 2016 and currently sitting at around 8%.

London and the South East is the heart of the UK electronics manufacturing sector, generating around a third of the sector’s total output and turnover. Related businesses are spread across the region and have particularly strong ties to aerospace, defence and space, pharmaceuticals, biotech and medical, and advanced engineering.

Thales Group is a prime example. The South East is a key region for the French multinational with two sites in Crawley and Reading. Crawley is Thales’ largest site in the UK and has been providing equipment and services to the Ministry of Defence since 1964. 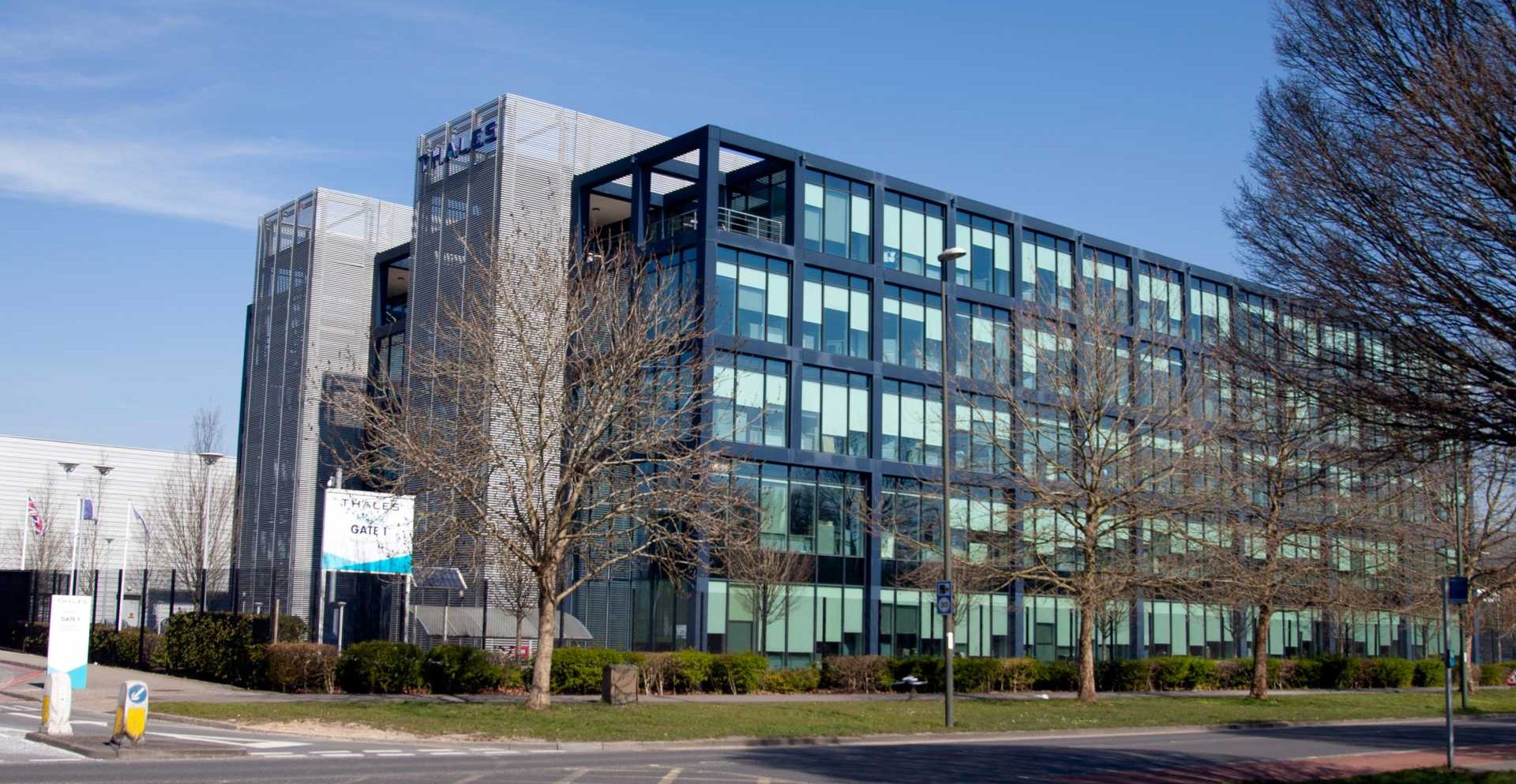 In the second half of 2017, Thales relocated its UK HQ and several other businesses to a cutting-edge £23m facility in Reading.

The site is home to Thales’ Digital Security business, its Land & Air Systems defence business and its new Naval Combat Management Centre, as well as being a STEM outreach centre for schools across the region.

The Reading estate has a strong focus on innovation and R&D and is home to Thales Research and Technology UK (TRT-UK), one of a global network of advanced research centres.

TRT-UK develops advanced technologies for a wide range of applications, with a specific research focus on sensing, data fusion and analysis, advanced networking and communications, autonomy and complex systems.

In early 2019, Thales’ furthered its longstanding relationship with the University of Southampton by embarking on a five-year research partnership with them to develop the next generation of autonomous maritime technology for the Royal Navy.

Thales has worked with the university on a number of other successful projects, which include experimenting with aircraft connectivity, unmanned aerial systems and quantum navigation technology.