Automation is expensive. But what if a low cost solution, that is quick to construct and implement into the production line could be utilised? This would enable many small businesses to take the next Industry 4.0 step.

Lower cost automation could completely alter production processes for smaller businesses, who might have previously been unable to use robotics because of price constraints.

Northampton-based company Igus, a manufacturer of energy chain systems and polymer plain bearings, has designed a new Delta robot that is lightweight and low cost for pick and place tasks.

The pick and place Delta robot system is not a new technology, however what Igus has done is reduce the costs involved. This could enable smaller manufacturers to adopt this technology, whereby they weren’t able to previously.

“It is possibly even disruptive to the current market, it is a simple assembly that is low cost”, Matthew Aldridge, managing director at Igus said at the Delta robot conference last week in Stratford. He added: “It is ready to use, it is ready to go.”

The machine has three drylin ZLW toothed belt-axes, lubrication-free igubal link rods and matching adapter plates. According to the company, the NEMA stepper motors and encoders ensure fast handling of up to 1kg with a fluctuation of just 0.5mm.

The development of the robot only began earlier this year, as the belt systems were already developed by the company.

Igus believe that the system has huge potential for the packaging industry, particularly for SMEs who wish to step into automation on their Industry 4.0 journey.

The lightweight robot’s design consists of aluminium and plastic, and is priced from £5,000, with its pick rate from 60 picks per minute.

Aldridge compared the assembly of the robot to that of flat-pack furniture in its simple assembly. He also exclusively told The Manufacturer about Igus’ future plans: “We want to look at scaling robotics, with more options for businesses, that is the next development.”

The Delta robot makes a convincing case for low cost automation that is flexible and mobile, which could allow SMEs to begin their 4IR journey.

FANUC has unveiled a slimline extension to its new generation of compact, general purpose robots, which is suited to smaller, narrow work spaces and top-mount applications.

The M10iD/10L is the latest model from FANUC’s M-10 robot series. It comes complete with a long arm to provide an extended reach of up to 1636mm.

With a footprint of just 343m x 343mm, the robot is suited to compact production line installations, and is articulated to reach narrow spaces.

The compact piece of automation features a hollow arm, wrist and body, which facilitate the routing of internal cables.

The company believe that this not only makes the robot straightforward to integrate and modify, but – coupled with a slim curved arm – it also reduces any interference with peripheral devices. 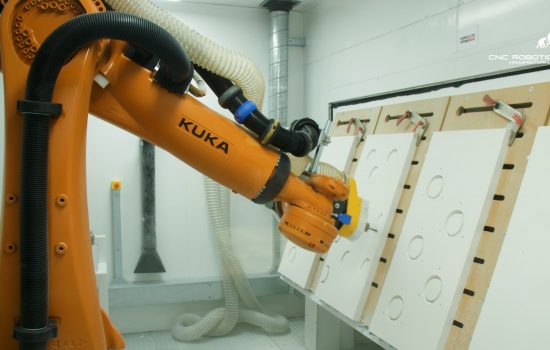