Manufacturers increasing investments in digital technology in response to pandemic

The pandemic has sharpened the need for manufacturers to invest in digital technology to better predict the unpredictable, Paul Wellener, vice chairman, U.S. Industrial Products and Construction Leader at Deloitte, said as part of a December 8 briefing on Deloitte’s 2021 Manufacturing Industry Outlook.

“As manufacturers, we can better cage those black swans,” Wellener said. “Manufacturers across the board will have to become better at creating visibility and better at forecasting ability. The disruption during the pandemic has shown how quickly manufacturing operations can come to a standstill and also shown how quickly manufacturing can bounce back. Manufacturers who made digital investments have bounced back quickly. Agility is the key. If manufacturers continue to invest in digital capabilities, they will be able to respond to black swans, not just the ones we have today, but the ones we will have in the future.”

Overall, only 18% of manufacturers Deloitte surveyed rated the North American economy as good and the same percentage said they were at or above their pre-crisis operating level now or would be by the end of 2020. But 59% of manufacturers expect improvements by the second half of 2021.

Manufacturers are optimistic and taking steps to thrive in 2021

When the pandemic began, many organizations created war rooms to consider how to meet supply and demand challenges, he said. Increasingly, the answer was to create more smart factory initiatives with visibility into their supply chains. For example, digital technology can help manufacturers better forecast surges and decrease in demand so they can increase production or slow or shift production in response to disruptions, Wellener said.

“Digital twins can apply in product development, in prototyping, in procurement,” Wellener said. “It’s a way to simulate performance, demonstrate what can be done with products and processes up front,  without spending significant dollars in capital. It saves so much in downstream development.”

In response to supply chain disruptions during the pandemic, manufacturers said they planned to shift supply chains closer to home, in their own countries or neighboring countries, with 44% planning to shift to a more regional model and 31% focusing on near-shore manufacturing sometime in 2021, Wellener said.

Even as companies have looked to bring supply chains closer to home, China has remained competitive, Wellener said. “China is very competitive in the kinds of products in high demand during the pandemic such as PPE and technologies related to remote interaction.”

Additionally, China’s manufacturing recovery was based partly on lending from its government for investment in infrastructure, Wellener said.

“Once a vaccine is introduced, we could see a shift in spending more toward services and less toward goods,” he said. “As China accumulates more debt, there could come a time when they have to scale back. China’s surge in manufacturing is in some senses temporary and there are some risks.”

Companies who have relied on symbiotic relationships with China would like to see easing of tariffs, Wellener said. There may be some hope of such easing.

The lion’s share of pandemic-caused disruption in the US economy came in the service sector, Kalish said. Manufacturing did see a sharp initial decline but had recovered by the end of the second quarter, based partly on strong US spending on durable goods. As large numbers of people switched to working remotely, some employees chose to move out of big cities and buy new houses with home offices, he said.

“That led to some strength in manufacturing in home appliances and other home improvements,” Kalish said.

As the pandemic continues, key service industries will be disrupted further, said Kalish said. “We’ve seen a sharp increase in people permanently unemployed,” Kalish said. Restaurants, retailers and other small businesses will be downsizing or failing, he said.

As federal stimulus programs expire, evictions and bankruptcies could surge if Congress does not approve new stimulus spending, Kalish said.

“Absent a stimulus, many households and small businesses will fail or significantly drop spending,” he said. “The risk is the impact could spread into industries not yet impacted by this crisis. The idea is to use the stimulus to keep the economy functioning until we see a large impact caused by the rollout of a vaccine.”

Successful vaccines could lead to strong growth and surges in spending, Kalish said. “There’s pent up demand and people have quite a lot of cash saved up,” he said. “The risk is, if we don’t get sufficient stimulus to protect consumers in the service sector still impacted by the virus, the slipover could impact the overall economy including manufacturing.”

After slowing down, mergers and acquisitions have increased in the industrial sector, Wellener said.

“Outside of manufacturing, health care and high tech are seeing a resurgence in M&A,” he said. “We’re seeing some manufacturing companies spend more time and money on M&A. We’re seeing manufacturers invest in tech startups and use M&A to stimulate growth and acquire talent in new and growing industries.”

Another area where manufacturers are investing is in retrofitting brownfield factories for the digital future as opposed to building new factories, Wellener said.

Deloitte is keeping an eye on factors that will shape a recovery including consumer spending, supply chain risk, manufacturing investment in the future to address the skills gap shortage, and supply chain management, said Kate Hardin, executive director of the Deloitte Research Center for Energy and Industrials.

In some cases, emerging digital technology such as sensors does not require additional training, Wellener said. But, he added, “AI use cases and big data analytics are going to be much more difficult to bring into mainstream manufacturing organizations. For example, you will have to have AI experts who can leverage AI. Different skills gaps will have to be closed.” 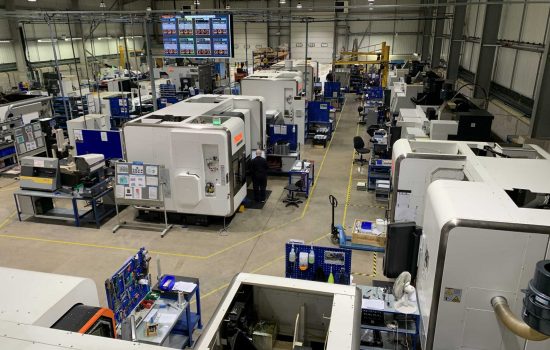