Posted on 6 Oct 2015 by Victoria Fitzgerald

As immigration remains a staple in headline news, Victoria Fitzgerald looks at the impact of migrant workers on the UK manufacturing sector.

And why? According to a Parliament spokesperson the Prime Minister “thinks it is in the interests of our country, that we will have a better, stronger country, if we have lower net migration.”

Really? Unfortunately, it has become somewhat common place throughout the course of history to use migrants as scapegoats for underlying national problems, from the economy to education.

However, it becomes increasingly dangerous when news outlets publish hateful, irresponsible and downright untrue headlines like Immigrants bring more crime or Migrants take all new jobs in Britain, which only seek to sensationalise and incite unfounded fear of the movement of individuals into Britain from the EU and beyond.

The very fabric of the UK both past and present is comprised of a history of colonisation from Celts; Romans; Saxons; Vikings; Normans, the list is endless.

During the two World Wars, hundreds of thousands of men from across the Empire fought for Britain. India alone provided 1.3m soldiers for the First World War, 138,000 serving on the Western Front. 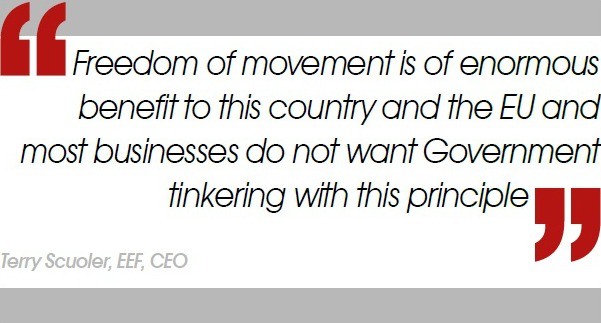 At the end of the Second World War, government sought out migrant workers to fill the gaps left in the labour market. Historically, immigration has been a great asset to the UK, but this has not been portrayed in mainstream media.

As EEF CEO, Terry Scuoler recently told a gathering of senior industrialists, “There are important principles which we must seek to uphold amid an increasingly frenzied and sometimes overly emotional – not to mention factually inaccurate – debate on immigration in the UK.

“Freedom of movement is of enormous benefit to this country and the EU and most businesses do not want Government tinkering with this principle.

“That does not in any way prevent the UK from having effective border controls or changing the rules around in and out-of-work benefits, something which I suspect would find favour in other European capitals.

“The issue has to be about achieving proportionate and fair rules for all. We need to lift the debate on immigration a few levels as the rhetoric is increasingly unpleasant.”

In terms of unemployment, according to a Migration Advisory Committee report from July 2014, “The employment rate of UK-born working-age population was practically unchanged by the substantial inflow of EU8 migrants after 2004”.

And while the youth labour market remains a cause for concern, it is a result of education and training programmes and nothing whatsoever to do with immigration.

From 2000 – 2011, migrant and natives made very similar contributions to the UK fiscal position, furthermore, according to the University College London Centre for research and Analysis of Migration, European migrants have added almost £5bn more to the UK economy than they have used in benefits since 2004.

Tim Thomas, head of Employment and Skills Policy at EEF, explains that there are three channels that migrant workers arrive in the UK, “Under the Amsterdam Treaty, citizens of EU member states have the right to live and work in the UK, whether they are highly-skilled or semi-skilled.

“In terms of the rest of the world, it’s a completely different story. Multi-national companies can action an intra-company transfer or the employer must demonstrate they need to fill a role, which cannot be filled by the domestic labour market.” 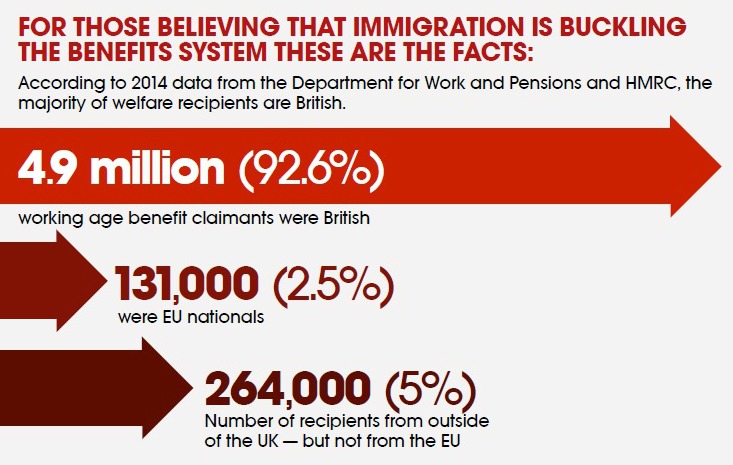 In terms of semi-skilled migrants living and working in the UK, the food and drink sector in particular benefits significantly in busy seasons.

A representative for the Food & Drink federation said in a statement “In some cases a shortage of available solutions creates opportunities for migrant workers to fulfil a range of roles and make a valuable contribution to the industry”, not only this but Jamie Town, director of logistics firm Clarico, said that without migrant workers, the UK food and drink industry would “fall down as factories would simply not be able to operate”.

It’s not just in the food and drink sector, Juergen Zahl, managing director of Brose UK, a family owned automotive supplier, providing specialist mechatronic systems and electric motors to car manufacturers and suppliers all over the world, explains the great benefit of both immigration and the free movement of labour throughout the EU.

He tells TM, “Our employees reflect the diversity of the Brose Group. Within the company, women and men from 80 countries work together worldwide in global interdisciplinary teams. Brose UK has grown massively in the past three years, going from 200 employees in 2012 to an anticipated 950-strong workforce by the start of 2016. 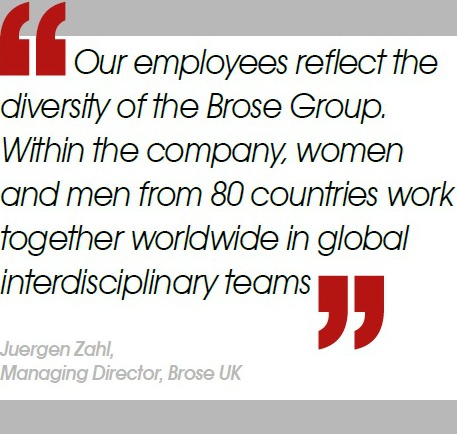 “Out of the current 700 permanent members of staff, 450 are UK nationals, 210 are from the EU and 40 outside the European Union. Given that nearly a third of our current workforce is of non-UK nationality, they obviously play an essential part in our ability to manufacture the volumes we require.

“We have invested nearly £3m in developing our own academy so that we can upskill our existing staff and offer structured training to new starters. We are also firmly committed to the next generation of UK engineers and currently employ 16 apprentices, with a view to another 10 being recruited this summer.”

Recruiting beyond the realms of the EU is a different story, particularly if it’s not an intracompany transfer. Thomas elaborates, “You must demonstrate that actually they have a skill that you need that cannot be filled by the domestic labour market.

“Normally that means you have to advertise the position for a certain amount of time in the UK and if the position remains unfilled, then you can seek from outside the UK. After this, a visa application must begin for that particular person.

The SOC list sets out an official catalogue of professions that are not currently being necessitated by the UK labour market, and Thomas tells me that “about half of the occupations on the SOC list are in the manufacturing sector. Because we have a skills shortage.”

Although the list provides provisions to make filling these vacancies less cumbersome, on June 10 2015, the Government commissioned the MAC (Migration Advisory Committee) to review the Tier 2 SOC list to address concerns about the rising number of migrants in that route and reliance on them to fill shortages, which is set to be completed by December 2015.

Thomas tells TM, “The Government line on this is that there have been occupations on the SOC list for many years and they would like there to be some sort of sunset provision, where occupations would be placed on the list but could only remain on there for X number of years and then come off again.”

This is clearly frustrating for Thomas and EEF as a whole, as there is a reason that these roles are on the SOC, “Government believes employers are relying on non-UK labour, instead of trying to skill and train the domestic labour market and just importing the labour from abroad, which from our sector perspective is clearly wrong. We know three quarters of our members already have apprenticeship programmes.”

Thomas goes on to anecdotally explain that he spoke with a PhD graduate in a very niche area vital to manufacturing, who was being deported after the completion of their studies.

Students only have 14 weeks to find a job after they graduate, regulations like this are counter productive for two reasons; firstly, a student is expected to find a job during a period when they are studying for final exams; and secondly, the employers will have reservations in giving jobs when the results of an applicant’s studies are unknown.

This isn’t the only rumoured change going forward. There is apparently a Government provision to impose a levy on employers recruiting outside the EU.

“A skills surcharge,” Thomas explains. “We don’t know how much this would be. The idea is that the money would fund apprenticeships for UK and EU workers and de-incentivise people from recruiting non EU workers.

“We have already spoken out against it, because that’s not true and we are recruiting workers from outside the UK simply because they are not available in the domestic workforce.”

Although in the past it was much easier to transfer within a global company to work in the UK, this process is also being held under the microscope.

As of May 2015, for the first time, the UK breached the 20,800 cap of intra-company transferees. Government is now toying with the idea of elaborating the administrative process involved in the transference.

Something which Thomas doesn’t think will bode well for manufacturing, particularly in the automotive sector, he explains, “For example, rolling out a new model, you would want the ability to bring in people from outside the EU to help with the new model, if a firm can’t do that, what are the other options?

“It would be interesting to see what big American manufacturers would say. How would they view the UK if that were to happen?”

Treating the cause not the symptom

UK manufacturing is relying on foreign labour markets out of necessity not choice. If Government focused its attention on supporting and nurturing UK engineering and manufacturing talent in the UK, then perhaps the SOC list would decrease with an aim to be halved in the next two to three decades.

“A great team culture is important in manufacturing, a good way to achieve this is to recruit bright young people with a great attitude then promote from within and grow from within.”