McLaren Automotive: The power of partnerships

In a place where once there was bitterness and division, partnerships are creating a brand-new future for a part of South Yorkshire where history was made. It involves AMRC, McLaren Automotive, and two very special cars.

It was a dark and cold January day in Sheffield. In the cavernous, as-yet unfinished, factory the lights dimmed, leaving a spotlight on an iconic F1 racing car from yesteryear.

Music pumped and lights flashed as the doors opened and in raced a car from tomorrow. Engine howling, it performed pirouette after pirouette on the pristine new concrete floor, leaving a multitude of black doughnuts, until finally it pulled up next to the racing car.

Yesterday and tomorrow, connected by one name: Ayrton Senna. The legendary, and sadly late, racing driver drove the McLaren MP4/5 to three historic Grand Prix victories, while the new McLaren Senna will carry his name into the future.

It was a typically slick, choreographed factory christening by McLaren Automotive, but the showbiz was not allowed to overshadow the significance of the occasion. This £50m factory is where McLaren will start to make the carbon fibre chassis or monocell ‘tubs’ for their supercars, from September this year onwards.

It is a milestone in so many ways: the first time McLaren will actually manufacture on its own account (it currently outsources all production and assembles its cars in Woking, Surrey). It is reshoring from Austria a vital component of its product. And it will bring yet more highly-skilled jobs to the Sheffield-Rotherham area of South Yorkshire.

And there is something else: a little over thirty-three years ago, on the ground under where the McLaren Senna was spinning its ferocious ballet, a bloody battle was fought, between 5,000 striking miners and an equal number of police.

It was the era-defining Battle of Orgreave of 1984, from when the de-industrialising of Britain can in many ways be dated. The symbolism of a world-renowned, successful British company returning manufacturing jobs to this place of sadness and bitterness is immense.

From coal to carbon-fibre

The McLaren Composites Technology Centre (MCTC) is located in the grounds of the AMRC.

When CEO Mike Flewitt turned on the illuminated McLaren sign to officially open the building, he paid fulsome tribute to the University of Sheffield and the local authorities in Sheffield and Rotherham for their parts in making this possible.

I explored this with Ken Smart, the project director, whose job it will be to take this empty space and turn it into a factory of the future.

It is not as if they will have to start from scratch. While the factory is being completed and fitted, Smart and his team have already been working with AMRC and the university to train staff and develop prototypes.

“Instead of which, we have used machinery and equipment that’s available for British companies like us to use, because the AMRC exists for that purpose.

“The processes are being developed on university equipment here. We have our first prototype tubs, and the monocells are coming off the equipment as we speak. In fact, we’ve moulded one today!”

Ken Smart was at great pains to emphasise that this is not a southern company putting down roots in the North then importing the staff from the South.

“There’s a whole community here that provides us with a terrific technical labour pool,” he said. “Good graduates, and there are good apprentice training schools round here, so it’s the perfect place for us to bring this project.”

Timing, as they say, is everything, but this project was conceived long before Brexit was a twinkle in its progenitors’ eyes.

Yet the impact of reshoring this production from Austria in the months leading up to the UK’s exit from the EU is both psychologically significant, in terms of what it says about the self-confidence of UK manufacturing, and, operationally, in terms of its strategic importance for McLaren.

“Brexit is just a happy coincidence really, because bringing another 8% of the value of the car back into the UK just gives us 8% more protection against exchange rate fluctuations,” Smart said.

(In total, 58% of the content of McLaren’s cars will now be made in the UK.) “But the reason we’re doing this is to take control over a core part of what a McLaren is. It enables us to learn. If we have problems, we solve them, and in solving them, we’ve just learnt.

The McLaren Senna is so far beyond being a supercar that it deserves the name ‘hypercar’. It is lighter, faster, and more responsive than anything McLaren has ever built, the ultimate track car that can also be driven on the road.

Only 500 models will be made, and they have all been bought for the not insignificant sum of £750,000 each.

The fact that future McLarens will be shaped around a chassis that the company is developing for itself means that, fanciful as it may seem, the Senna will one day be overtaken in technological terms by some other model that emerges from the designing and manufacturing teams at McLaren.

According to Smart, they regard the idea that it is possible to set a limit on innovation as nonsense.

“I don’t think any of us would be working for McLaren if we saw life that way. It’s an organisation that’s always looking to just stretch those boundaries. Actually, the boundaries don’t exist for us.”

A final thought. Don’t worry about who’s going to scrape those doughnut layers of black Pirelli rubber off the once-pristine factory floor.

Smart says they are going to leave them there forever, probably under a layer of transparent sealant, as a reminder to those walking those floors in years to come that the spirit of Senna – and the Senna – is part of all they do.

At The Manufacturer MX Awards 2017, the overall winner of the night was McLaren Automotive, the supercar maker from Woking.

On top of winning the ‘Innovation & Design’ and ‘Smart Factory’ categories, McLaren Automotive were judged to be the overall winner on the night, taking home the highly coveted title of ‘The Manufacturer of the Year’.

Nick Peters spoke to Alan Foster, McLaren Automotive’s Executive Director Infrastructure Projects, about their success and  how they achieved it. You can read the feature here. 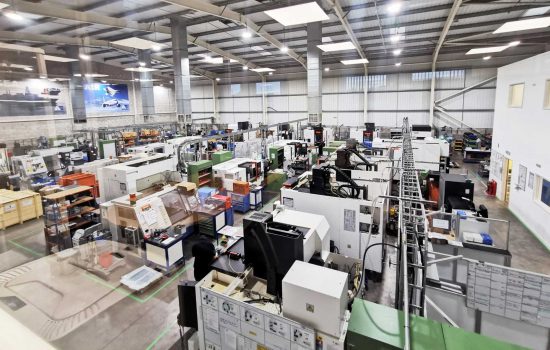