Posted on 8 Oct 2016 by The Manufacturer

Now the dust is beginning to settle on the seismic events of the summer, EEF's Terry Scuoler reports on the health of manufacturing and the wider economy in a post–referendum world.

It’s safe to say that business conditions in manufacturing are mixed, with the sector having been on a rollercoaster ride since the start of the year and economic indicators showing vastly different results.

While the August PMI showed the biggest monthly increase in the survey’s history, the official output data showed a marked fall. Our own survey, for the third quarter, showed a deterioration in output and new order intake for the fifth quarter running.

This news was worse than expected, but not radically different from the trading conditions recorded by our survey since the start of this year.

The good news is that export sales beat expectations and the improving trend is forecast to accelerate by the end of the year, shoring up confidence among manufacturers about their own growth outlook.

In contrast, however, manufacturers are still relatively downbeat about prospects for the UK economy over the next year, with big unanswered questions about Brexit still casting a shadow over the UK’s growth outlook.

This is having a marked impact on investment intentions, which have been negative since the end of last year with no sign of any improvement. This is not surprising in the current climate.

Pressing ahead with new capacity investment in the UK feels somewhat risky, particularly without knowing what the trading relationship with major customers in the EU will look like in the long term.

Overall, as we enter the autumn, manufacturers believe the UK economy is in for some Brexit–related challenges in the year ahead, especially when Article 50 is triggered.

They are feeling more upbeat about their own ability to grow, however, given the UK hasn’t left the EU and export orders are picking up.

On the downside, this scenario is playing out very differently in different manufacturing sub-sectors, and companies are nervous about unleashing new capital expenditure. 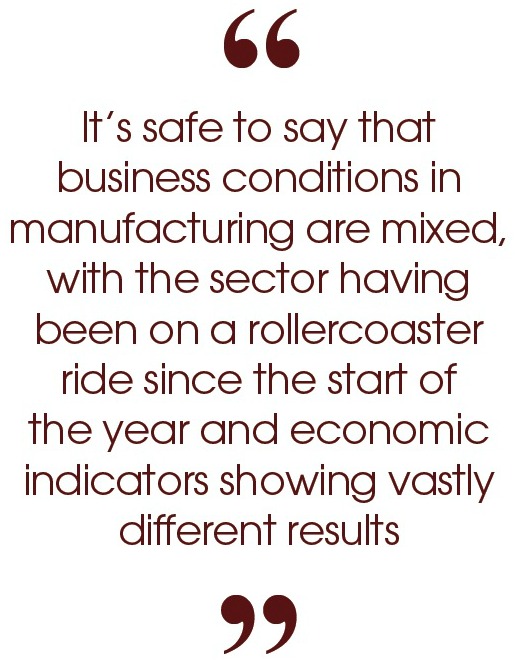 Amid a backdrop of business uncertainty, the Chancellor will announce his Autumn Statement next month, a statement that has taken on critical importance since the referendum vote.

The governor of the Bank of England has recognised the dangers of recession by cutting interest rates and injecting more money into the economy but, as he has pointed out, there is only so much firepower he can bring to bear.

With interest rates already at record lows, it is doubtful whether this action alone will turn on the investment tap.

The forthcoming statement should focus on boosting economic growth and investment, both by the private sector and government, through major public infrastructure projects.

We have already seen government commit to Hinkley Point C, which places energy at the heart of industrial strategy, while a decision on extra airport capacity is imminent.

Both of these will be positive signals of intent by the new government, but they are not the full picture alone. We need a modern industrial strategy with growth and investment at its heart, something the Chancellor can begin to deliver next month.