BAE Systems and the University of Manchester have successfully completed the first phase of flight trials with MAGMA – a small scale unmanned aerial vehicle, which will use a unique blown-air system to manoeuvre the aircraft.

The new concept for aircraft control reportedly removes the conventional need for complex, mechanical moving parts used to move flaps to control the aircraft during flight.

This could give greater control as well as reduce weight and maintenance costs, allowing for lighter, stealthier, faster and more efficient military and civil aircraft in the future.

The two technologies to be trialled first using the jet-powered UAV, MAGMA, are:

The flight trials are part of an ongoing project between the two organisations and wider long-term collaboration between industry, academia and government to explore and develop innovative flight control technology.

Further flight trials are planned for the coming months to demonstrate the novel flight control technologies with the ultimate aim of flying the aircraft without any moving control surfaces or fins.

If successful, the tests will demonstrate the first ever use of such circulation control in flight on a gas turbine aircraft and from a single engine.

Engineering Fellow at BAE Systems, Clyde Warsop explained: “The technologies we are developing with The University of Manchester will make it possible to design cheaper, higher performance, next generation aircraft.

“Our investment in research and development drives continued technological improvements in our advanced military aircraft, helping to ensure UK aerospace remains at the forefront of the industry and that we retain the right skills to design and build the aircraft of the future.”

Additional technologies to improve the performance of the UAV are being explored in collaboration with the University of Arizona and NATO Science and Technology Organisation. 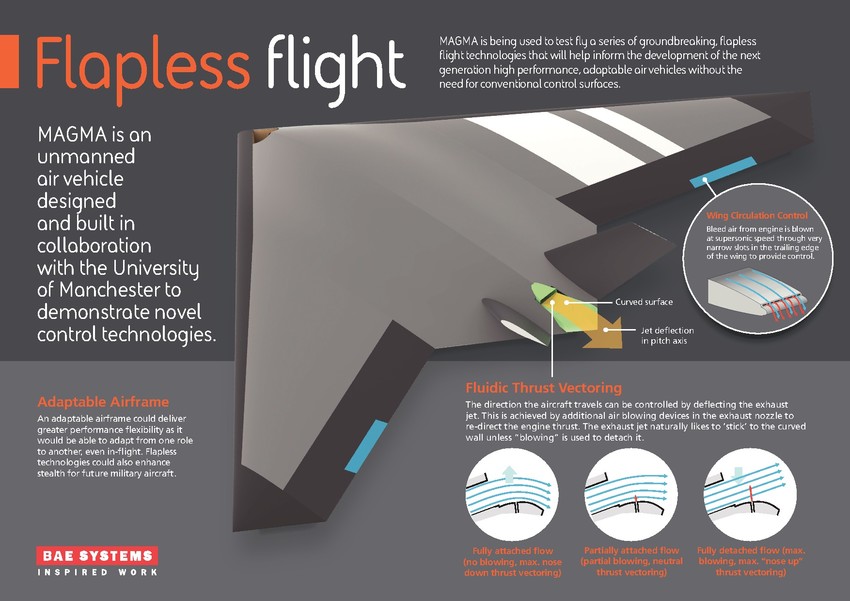 BAE Systems has invested £4.4bn in R&D over the past five years, representing a major asset to the UK defence industry. The company has spent £1bn on R&D in 2016 alone, including £10.7m partnering with leading UK universities in areas such as novel materials, advanced manufacturing, artificial intelligence, air vehicles and avionics testing.