Posted on 6 Dec 2016 by Jonny Williamson

BAE Systems has begun another tranche of ground-breaking unmanned aircraft technology trials as part of collaborative efforts across the country to assess how autonomous air vehicles could be integrated in UK airspace.

The unmanned aircraft trials involve a Jetstream 31 as a ‘flying testbed’, which flies itself while having pilots on board who could take control at any time, and are being conducted from the BAE System’s military aircraft engineering and manufacturing facility in Warton, Lancashire.

The latest trials are self-funded by BAE Systems at a cost of around £400,000 and build on the findings of the ASTRAEA (Autonomous Systems Technology Related Airborne Evaluation and Assessment) Research and Development programme which ran from 2008-2013.

BAE Systems has developed an extensive portfolio of unmanned air capabilities over the past two decades. It’s currently working on a joint Future Combat Air System programme with French company, Dassault as part of an anticipated £1.5bn programme that is expected to lead to the production of operational demonstrators.

With the UK’s Ministry of Defence, and other engineering organisations, BAE Systems has also designed and manufactured Taranis – an unmanned combat aircraft demonstrator – reportedly the UK’s most technologically advanced aircraft currently.

In a series of 17 flights, BAE Systems’ scientists and engineers aim to prove the capability, maturity and safe operation of autonomous air technologies controlled by a satellite-communications based link.  This has the advantage of being globally available already and therefore enabling operations without the need for new infrastructure.

Also being tested are further developments of sensing technologies, including aircraft and cloud avoidance using only camera input rather than radar. The results of the trials will inform the direction of BAE System’s future unmanned aircraft programme and the suitability of testing unmanned aircraft in the UK.

The series of test flights involve a team of two engineers on-board whom together with air traffic control experts at NATS, continually assess the performance of the systems on the testbed. Flights last 90 minutes and are flying through non-congested airspace on a route from Warton to Inverness, Scotland covering around 300 miles and normally flying at 15,000 feet.

A pilot and co-pilot are in control for take-off and landing, but once airborne and in controlled airspace the Jetstream flies itself. On the ground a flight test observer and an unmanned air vehicle commander –  who is a fully licensed pilot for these trials – are monitoring the flights via satellite communications.

The testbed contains an aircraft identification antenna which detects other aircraft’s transponder signals, as well as a cockpit mounted camera acting as an ‘electronic eye’. This links to the aircraft’s computer systems and enables the Jetstream to ‘see’ potential hazards even if no signals are being emitted. The “electronic eye” of the Jetstream can also recognise different cloud types and, if needed, plot a course that allows evasive action from challenging weather conditions. 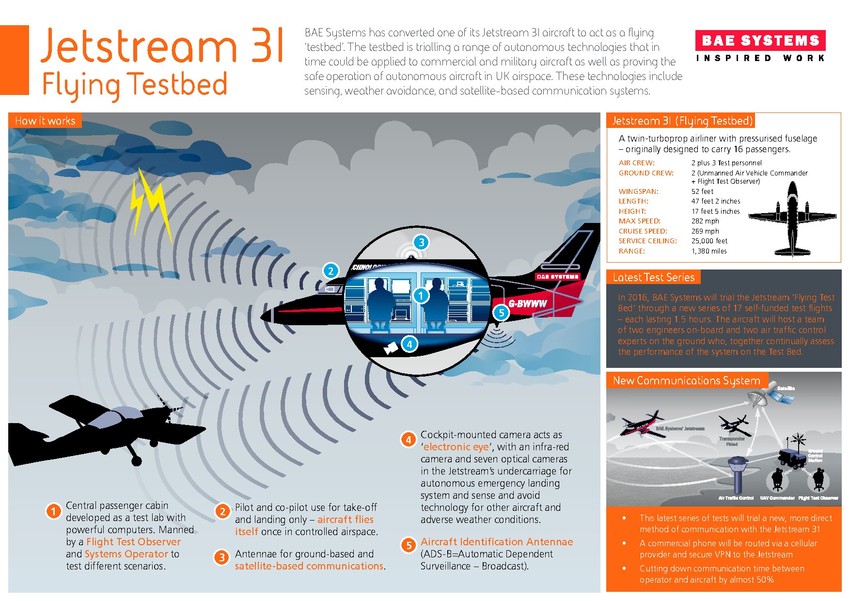 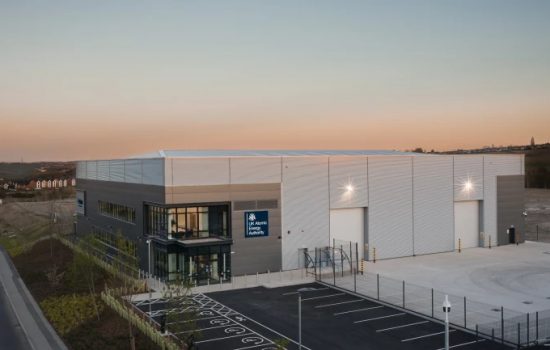