Cummins is a global manufacturer of power related products, with a history spanning 100 years. It has evolved from an engine company into various other segments of power delivery. The Manufacturer’s Tom St John paid a visit to the company’s Daventry plant, where he learned about manual engineering processes, sustainable pushes and exasperating supply chain frustrations.

When I drove up to the Cummins site, the first thing that struck me was its sheer size. I’m instructed to drive all the way around the perimeter of the factory, and as I peer out of the window looking for the car park, I’m beginning to wonder if I’ve managed to get lost.

As I picture the security lady tracking my tentative progress on CCTV, and laughing at me for missing my instructed location, I eventually see the reception building. As well as being a large site, I later discover from David Barker, Plant Manager at Cummins, it’s also an old site; the building was designed and built in the late 1960s. Purchased in 1972 from Herbert Ingersoll to produce high horsepower KV engines, it was the first windowless factory in the UK (there’s one for my ‘The Manufacturer Pub Quiz’ this Christmas). 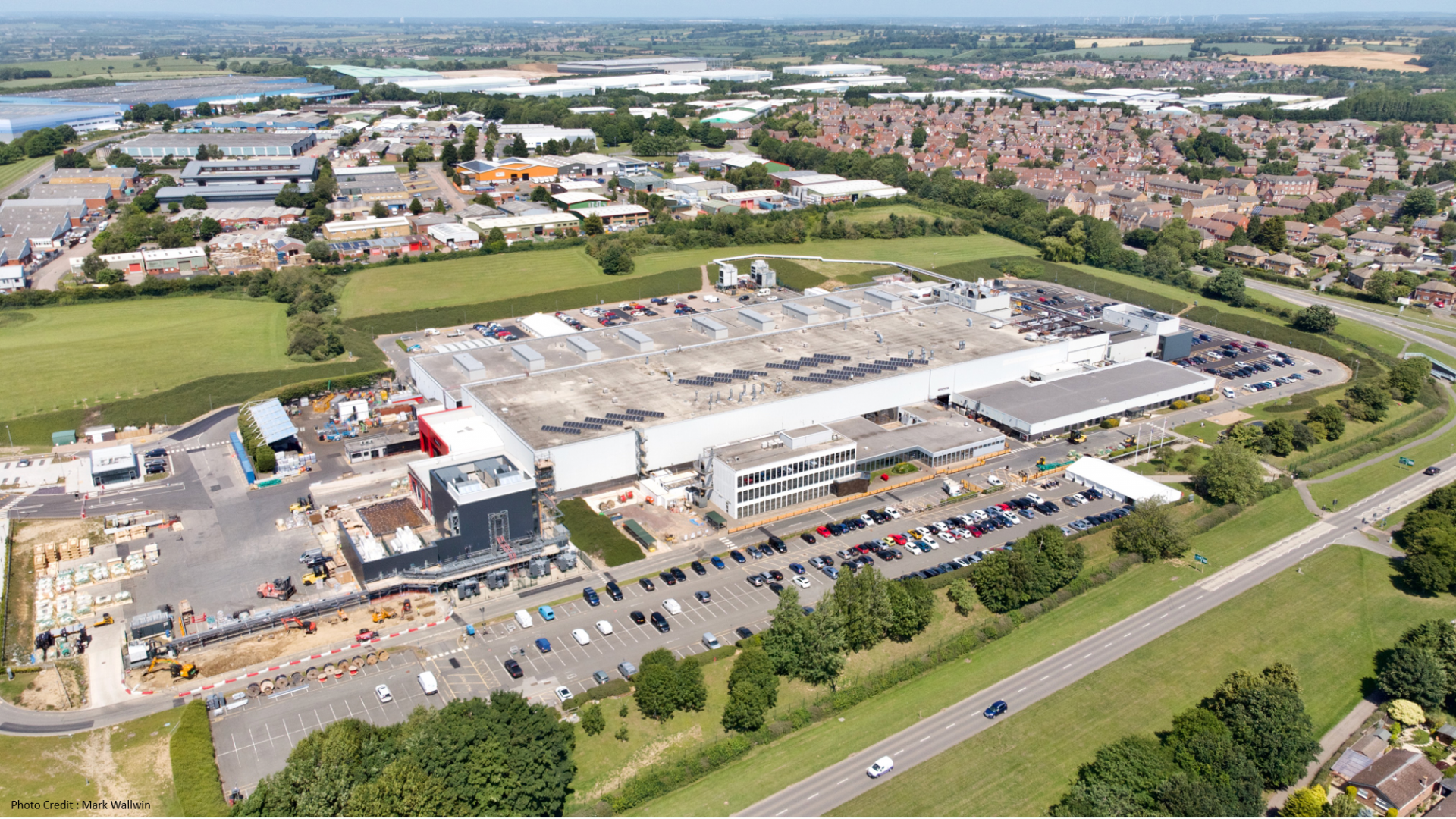 Next year will also mark the 50-year anniversary of operations in Daventry. I’m greeted warmly by Dave at reception, and we step inside and out of the drizzly morning rain. We walk through to a room where protective shoes are stored, and Dave enquired after my size. “You’ll be thankful for them if something lands on your toe – however, they’re not the most fashionable.” On the contrary, I think to myself, looking down at my bang average white trainers, these are nicer than my actual shoes.

I’m taken through to Dave’s office where he plans to give me an overview of the company before walking me around the factory. “I don’t want it to be a case of death by PowerPoint,” he said as I take a seat at a long boardroom table, “But I thought this might serve well for an introduction.” I’ll admit, I wasn’t enthused at this prospect, if Dave hadn’t mentioned the words “PowerPoint” and “Death,” I may have been more open to the idea. It turned out to be fascinating. I was suddenly presented with the many and varied end applications for Cummins’ products, such as enormous diesel engines used in gigantic industrial trucks, some of the largest in the world, driven at high altitudes in the mountainous mining locations of North and South America, Australia, Indonesia etc.

“We also have marine applications,” explained Dave. “Our engines power oil supply vessels, inland waterway barges and fast ferries in the Gulf of Mexico, California, Nigeria and many other territories around the world. We also power locomotives. “One of our major markets is generator sets,” he continued. “Power generation; so an engine and an alternative in a generation package. We have them as backup power for the London Eye and the Channel Tunnel, but globally, for power in data centres – from YouTube to financial data. We also have them as primary and supplementary power in remote locations around the world with poor grid infrastructure.”

Almost every manufacturer we’ve interviewed has a laser-like focus on becoming more sustainable, and Dave explained that through his 30 years at the company, the focus on sustainability has intensified massively over the last decade. “We’re on a journey to destination net zero,” he added. “There are different paths towards becoming a fully sustainable organisation. We’re working towards making zero carbon products, by producing power through hydrogen, alternative fuels and battery electric systems.”

It dawned on me that there must be some issues around making large diesel engine trucks environmentally friendly, so I asked how those core products tally with the company’s sustainable goals. “We’re working on making them more efficient and cleaner so they produce less CO2 and noxious emissions. However, let’s not kid ourselves, the engines that you find in large trucks will be diesel for the next 20 to 30 years. You can’t run these vehicles off battery or hydrogen; the technology of alternative fuel cells just isn’t there yet. You’ve got to make sure these vehicles are reliable; you can’t have them conking out halfway up a mountain.” 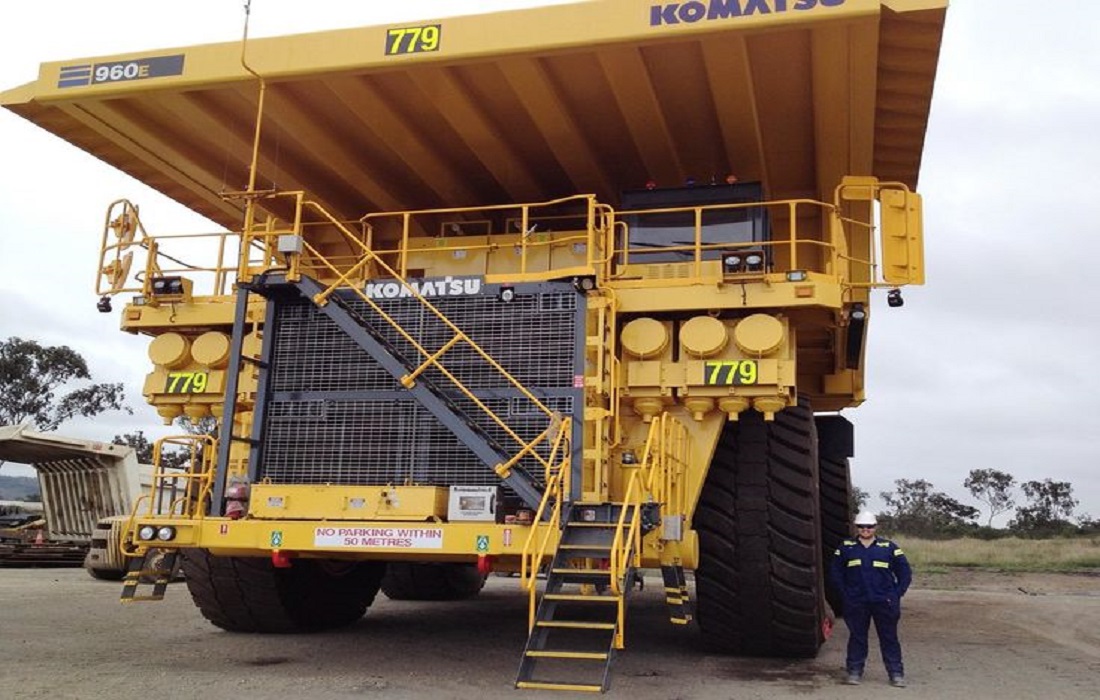 While battery powered trucks may be a thing of the future, the sustainable aspirations of Cummins in Daventry is very much for the here and now as processes are becoming less impactful on the environment, and more sustainable. Work has begun to power the whole facility through solar. “We’re recovering the energy from every engine that we test,” continued Dave, “We’re reducing our waste; both our income and consumption of packaging and our waste streams. We’re doing our best to be less impactful on the environment while still serving our customer needs for power.”

On a tour of the factory floor I observed long assemblies of enormous engines and even bigger gensets, spray painted green, which took up the majority of space. Well-appointed green and yellow walkways guided our path safely through the facility. Factory processes, like most throughout the UK, are digital and automated, but when it actually comes to manufacturing, customer specifications and demands can be changeable and complex, which often leads to a very bespoke product. As a result, engineering processes remain predominantly manual.

“Can this plant ever be truly automated?” I asked. “Never say never,” mused Dave, with a smile, “But right now, it’s just not right for this plant. If you think about the scale of products that Cummins produces, we have some plants producing fuel systems, after treatment, injectors or widgets – that’s a pretty much fully automatic process. Some of our engine plants are manufacturing at scale, with a lot of robotic and cobotic automation. “However, when we get to the large, low volume, high proliferation, heavy products we produce here in Daventry, automation becomes less impactful, less efficient and more complex. At this factory, we have close to 1,000 people involved in this operation, and very limited full automation.” 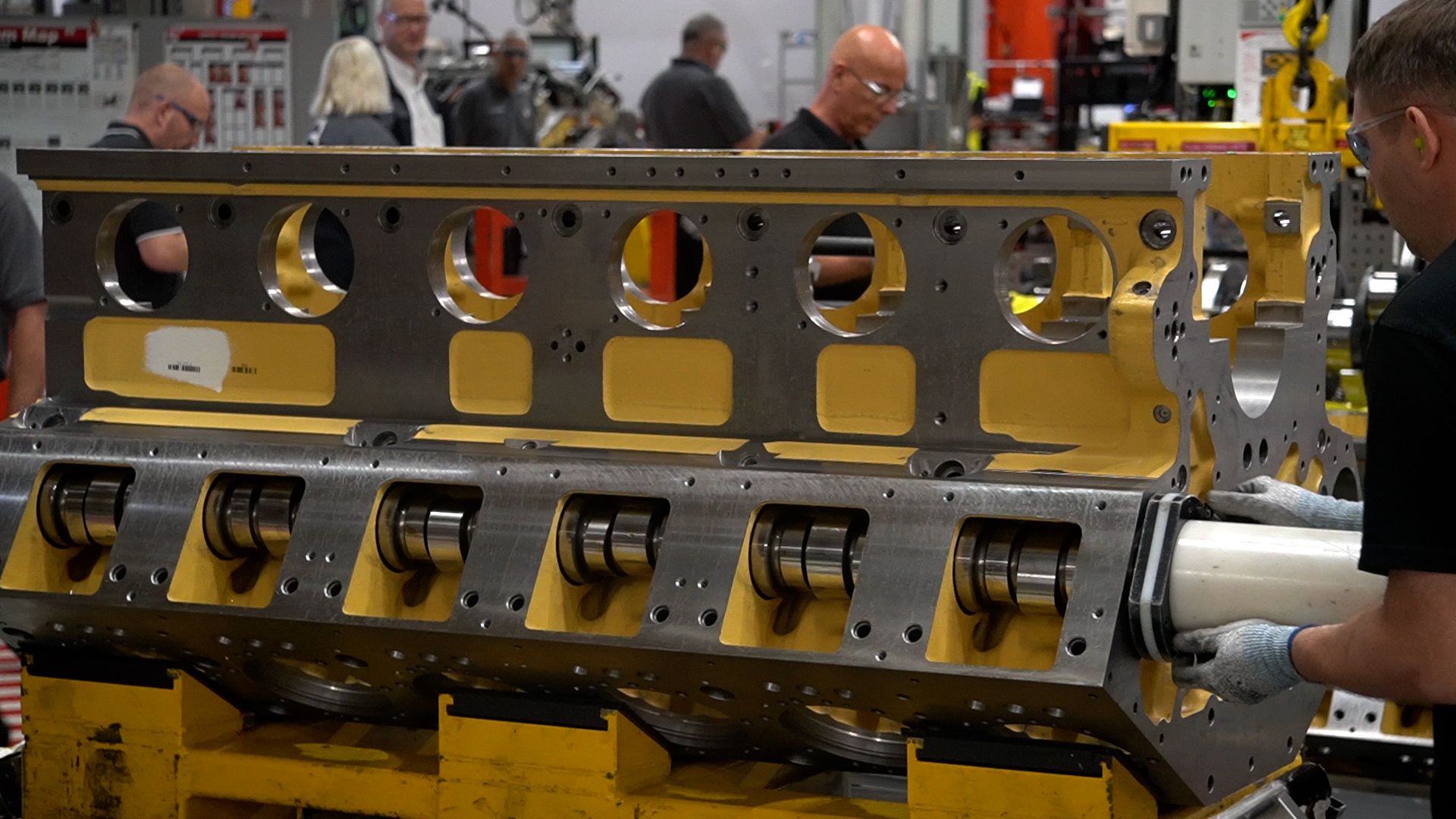 We walked past an engineer using a large winch-like machine to align a component. “There you go,” said Dave, “We have a lot of assistive devices to make our work easier and less physically demanding, but a lot of our automation is in our systems and behind the scenes rather than the physical processes and operations. “The bigger products are always more bespoke. When we build a 12-tonne industrial unit, each one is unique to a customer, each one is different and has a different application and use. It’s very difficult to automate that, which is why you see a very manually dependent operation here.”

Supply chain woes for Cummins have been extensive. In his office, Dave showed me a slide of Cummins’ global reach – a map of DAV shipments by market. He winced as he hovered his mouse over the lead times of areas like China (17 weeks) and Japan (20 weeks). “I’ve been in this operation for 30 years, and the last three have been very unique,” he said. Obviously, the largest fly in the ointment during that period was COVID, however, while the pandemic brought some challenges, the more involved and frustrating issue for Cummins was, and still is, around supply chains. “Although COVID was tough, it was actually really fascinating, as a leader, to work through it all,” added Dave. “We worked very collaboratively with our workforce, learned as we went along and were able to keep operating – we didn’t close the facility.

“We were able to learn and develop controls, installed our own national health registered lateral flow test centre in the building to look after our employees, and we turned our canteen over to feed local disadvantaged children. It was an incredibly challenging period.” Dave paused, as if to process the words needed to conjure the frustration of the next, and bigger problem. “The supply chain challenges we have now are even more difficult to manage,” he said.

“On a daily basis, when we plan our operational production, we’re seeing supply shortages. Some of this we can see coming, and we’re able to plan around it. But some of it is a surprise, and it’s a surprise every day. “It’s not necessarily the great big components like a cylinder block, piston, connecting rod or a crankshaft, it can be a nut or a bolt, a washer, a hose, a harness connector or a battery terminal. When you’re building a $100,000 component, and you’re short of a battery terminal, it can be really disruptive and hard to plan for, and of course, that makes it hard to maintain a commitment to customers.” 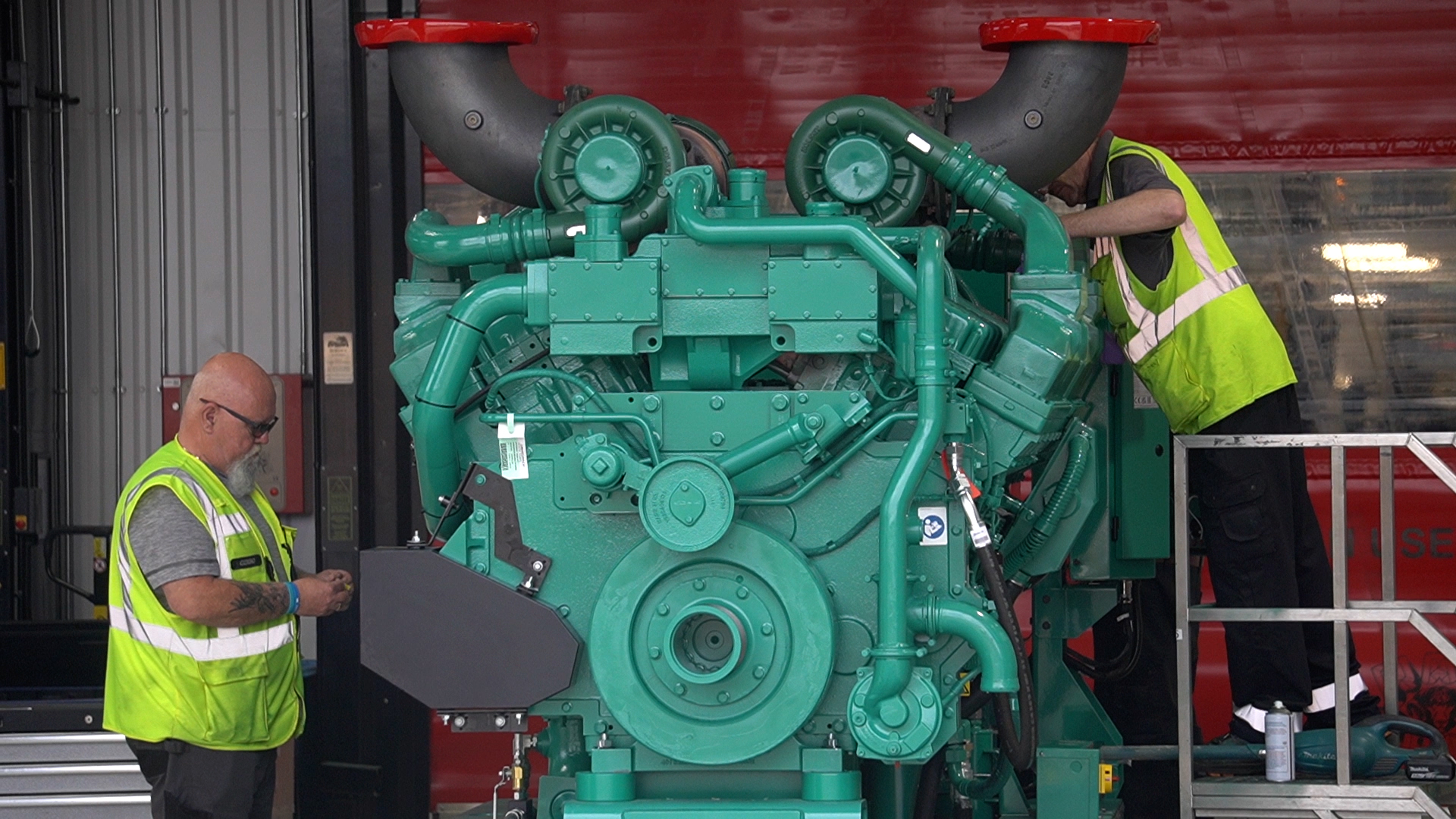 Dave went on to explain the logistics operation, “We’ve developed and evolved a just in time supply chain from a global supply base. We’re bringing components from China, India, North America, Europe, the UK and so on – that supply chain is just broken. What was a five-week lead time for a component from a global supplier is suddenly ten.” When I asked how this disruption is being managed, Dave added that the delivery performance of that logistics process is around 30% on time from a supplier. “As you can imagine, we’ve got to be really agile. We’re able to do that and adjust our build plans regularly – we work with what we’ve got. We’re building products and then having to put them back down the line to adjust and finish because of those challenges. It’s difficult to plan for and to mitigate, but our ability to be flexible has got us through.”

As we continued to walk the factory floor, I saw a good mixture of ages and genders. You might think that Cummins would attract talent from far and wide, but as we see time and time again, factories such as these are often industry’s best kept secrets. The skills and labour shortage is one of the greatest hurdles for businesses to overcome, but thankfully for Cummins, it’s active in the local area, so attracting new talent while keeping older staff hasn’t been a problem. “We’ve been really fortunate; we have a very stable plant and workforce.”

“We’ve been in operation here for close to 50 years, and our longest serving member of staff has been in the building 44 of those 50 years. We have very little turnover in our staff, which is really beneficial. We are continuing to recruit, but we’ve been able to attract employees from our local area to what I firmly believe is a great company to work for, with good terms, conditions and facilities.

“From a staff perspective we’ve managed well, but we do see a greater challenge with smaller suppliers in regions where there are recruitment issues. We are seeing a shortage of skilled labour in foundries, machine shops and in various other industries. That is a concern, but we’re working hard with our suppliers to use any influence that we can.

“We’re also exploring different populations,” he continued, “Most of our employees here have been experienced engineers or mechanics from industry. We’re now recruiting from a different pool; we’re bringing in more women and people with no background in engineering that we’re able to train and educate quickly to follow a process. We’ve been able to attract different people which has been very successful.”

Also listen back to the most recent episode of The Manufacturer Podcast, Leadership Series.